Advice: Does polygamy work, because I love three women? 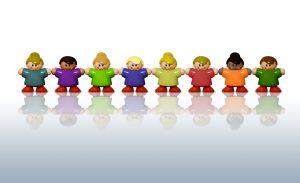 “I’m a 35 year-old journalist from Brazil and I’ve been dating a 22 year-old girl for three years now (she was 18 when we met). To make a long story short: after six months of dating, she stopped having sex with me. She says she hates her body (she is a little bit overweight, but I never minded that.) But I sayed with her and was faithful to her for two years, because I loved her.

Then she left me, claiming she was too young when she met me and she had to live and have experiences and so forth. We spent six months apart. During this period I dated two girls, and we hit it off pretty well, but when my ex wrote asking me to take her back, I took her back. I stopped seeing the other two girls and I tried to forget them.

My relationship with my girlfriend has become sexless again, and I don’t think it will ever change. Not only we don’t have sex: she doesn’t touch me, I have to touch her. But I love her just the same. Now, one of the girls wants to share me with my girlfriend: I would have two girldfriends, one knowing about the other. I have been daydreaming about this and reading about polyamory, but I don’t think this kind of thing actually works. Do you?

To make matters worse, the third girl has just told me she has cancer. She is undergoing chemotherapy, has shaven her head and the treatment is painful. She is scared and she has asked me to come visit her in her town and spend a few days with her.

I don’t know what to do. I don’t want to leave my girlfriend for her, but I feel bad saying no to somenone who is already suffering so much. I miss those two girls very much, but if I left my girlfriend I would miss her very much too.

I can’t sleep, I canÂ´t think of anything else. Does polyamory work? How can I ask my girlfriend to share me with other two? Is it fair? Is it wise? Won’t it just bring on more suffering in the end? We always ridiculed open relationships, and she will be astounded that I’m even considering this. ”

NML says: I’m not convinced that you know what real love is. You are spreading yourself thin over three women who all of them combined, manage to meet your needs, albeit dysfunctional. Now you are contemplating polygamy which would legitimise the opportunity to have your cake and eat it.

All four of you in this relationship are highly dysfunctional and that’s before you’ve even tried the polygamy. You being with the other two women is a reaction to issues that you are not facing with your main girlfriend.

Girlfriend 1 clearly has issues that have not been resolved by space because that probably had nothing to do with what is really bothering her. She doesn’t want to be physical with you or show or receive basic affection, but she needs you for something. In order for you to be with her, and her alone, your needs would have to go unacknowledged and this would be unfair. There is nothing wrong with wanting to be sexual or affectionate. However, unless you both sit down and discuss the reasons why she is insecure or even see a therapist, the great divide between you both is only going to widen. If she is insecure about her weight, this is a very real issue and unless she starts to feel good about herself, things aren’t going to change.

I suspect that if you really wanted her in your life, you could do so as friends without anything really changing. You say you don’t see things changing which means that you need to accept her for what she is or move on. I suggest move on because you are not prepared to be fully committed to be with her and the reality is that you can only be with her if you have the moral support of the other two.

You aren’t available which makes you highly attractive to Girlfriend’s 2 or 3, and them chasing you and needing you is making you feel needed and desired, something that you are lacking in your main relationship. I suspect that if you hadn’t gone back to your girlfriend, they might not be chasing you so eagerly. Absence really does make the heart grow fonder.

As for the lady with the cancer, she needs your care and concern, not your pity and I suspect you can be there for her without taking advantage of her already stressed and fragile mental state.

You didn’t choose to date one woman exclusively when you were broken up, you chose two. Normally if a man makes a conscious decision to date two women at a time it’s because he is emotionally unavailable and avoiding committing to either woman. Polygamy just reinforces your lack of commitment.

They validate you, they make you feel special, but if you really loved any of these women, you wouldn’t be trying to plunge them all into a constant state of insecurity.

So no, it’s not fair, and it’s not wise, and while I don’t doubt that there are people out there that have more than one partner and share the ‘wealth’, personally I believe that an arrangement like this relies on some or all of the parties being screwed up, willing to turn a blind eye, able to pretend they want less, and being compliant, accommodating, and submissive.

There is one person that benefits the most in this situation and that is you although I don’t believe you’re cut out for polygamy because if you were you wouldn’t be debating it. I’d leave out the trying to have your cake and eat it too, and either choose one of the women, or drop all of them until you’re in a position to be with one.

The Trouble With Being Involved With Mommy's Boys and Men That Hate Their Mothers
Buffers: When You're The One That They Turn To When They're Unhappy With Their Current Relationship
What being screwed over on a house taught me about living up to your values and commitment