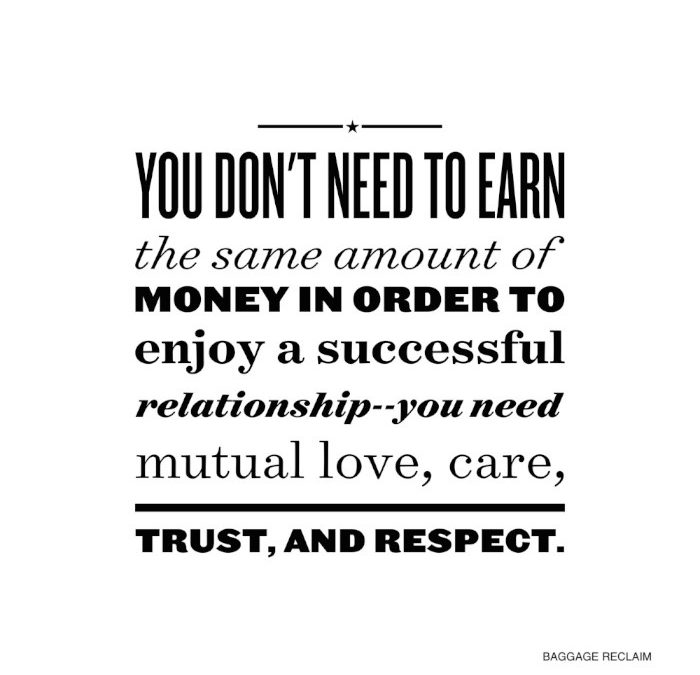 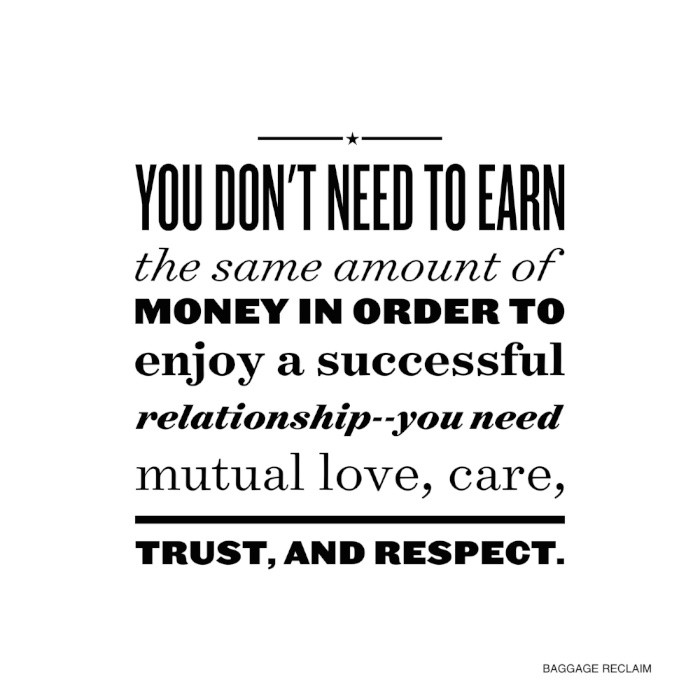 The tricky situation: Mani asks, I would really like your thoughts on the financial aspects in a relationship. Inadvertently I have experienced that a person with more financial strength has a upper hand in a relationship. My first ex’s behaviour became worse as he started earning more money. He became more controlling. Although I was earning more than him at one point, I had to give that up when our child arrived. This brought the worst in his behaviour over time.

The recent ex-boyfriend was very wealthy, although I did not know it when I met him and for the first couple of dates. We would take turns footing the bill when we used to go out. After sometime when we used to go out, he chose the best places, places which I could not afford to pay, which made me feel uncomfortable but at the time I felt that if he can afford to pay, then why not.

I’m wondering if financial equality is a must for a relationship to be successful and how to balance this considering that people’s finances can also change.

One of the things that you need to acknowledge Mani, is that money and power in a relationship is a concern for you. That’s not to say that your first ex’s behaviour wasn’t inappropriate (more on him later) but what’s clear is that you see finances as a source of independence but also as a means of control. What I’m seeing here is your discomfort about money and it’s vital that you compassionately inquire into your money associations as well as your relationships ones because your romantic relationships are closely associated with loss of power and independence and a level of pressure to keep things ‘equal’ in order to feel that the relationship is ‘OK’.

Is it necessary for there to be parity of incomes between relationship partners in order for the relationship to be successful?

No, otherwise very few of us would be in a relationship and money would be the deciding factor for all relationships. Who do you know that has absolutely equal finances and how would each party go about ensuring that any gains made were equitable? That would be pretty tricky around promotions, bonuses, job and career changes, if everything hangs in the balance of who is earning what. Also–in a world where women typically earn at least 20% less than their male counterparts in the same role or where a period of time will be taken out of work by one or both partners if kids come into the equation, it would be foolhardy to base relationship success on the shifting sands of finances.

Many relationships thrive regardless of whether one earns more, none, or is super rich. When money issues reveal themselves in a relationship, it fundamentally comes down to values, so how responsible they are with it or how it is used within the relationship, as well as personal hangups with money.

Finances are a major trigger for people, both in and out of relationships, and it’s only when we become conscious of the origins of money beliefs and behaviours, that past experiences that we’d forgotten or that we were already aware that they were very close to the bone, that we can help us make sense of what is going on right now.

If as a child you observed, for example, your father exerting control over your mother and she lacked financial freedom, something that was extremely common when most of us were kids and still exists, that will have sent a message to you about the need to fiercely protect your independence. If your mother, like mine and many others, told you that you need a man for security, on one hand you’ll feel as if you need to be defined by a relationship to be valid and at the same time, will be terrified of giving you up and having little or no security, so you become paralysed by fear while procrastinating in unavailable relationships. Told that you were a financial burden or that your mother “ruined” her life by getting married or having kids and you’ll probably crap yourself at the thought of doing either of these (associated with loss of independence) or panic that you’re being a burden on your partner if you ask them for something, again, a habit I’ve had to kick.

Parents lost your house when you were a kid (very common with BR readers)? Doesn’t matter how much money you have, if you never made peace with it, you’ll still be living like any minute now, it will all be taken away from you. Heard crap like, “Money is the root of all evil”, “People don’t like people with money”, “You’ll make people feel bad if you have money”, and boom, you feel shame about how much you earn. Told stuff like, “Men don’t like women who are ‘more clever’ than them or who earn more”, and you’re already poised to be defending you or playing down your accolades, possibly dating men who earn less than you and then playing it small. Somebody (or you) told you that people have one over you if they earn more than you and next thing, you’ll be paranoid that they’re out to get you. I could go on—and it’s such a fascinating topic—but you get the gist.

Mani, you need to have a very honest conversation with you about your beliefs and associations with money particularly in the context of your relationships.

Write down all of your money memories and associations. I thought I’d have a few things on my list and two very long pages of bullets later and I was still going. You will be so much more aware of why you feel uncomfortable in certain money situations and dynamics—much lightbulbs and connecting of dots. These present you with an opportunity to add some context and forgive you–check out my Unsent Letter Guide.

As for your first ex, the problem wasn’t that he started earning more than you; the problem is that his behaviour was already a problem and he exploited something that someone else who was not controlling and problematic, would not have done. Financial abuse such as taking control of the finances, controlling you with money, running up loads of debt so you can’t leave, are just some of the tricks of the controlling trade. Any relationship where there is talk of the “upper hand”, is a relationship with control and power issues, is a relationship on a code red alert.

While we have moved along somewhat and there are plenty of men and women who don’t feel threatened by earning less than their partners, there are some who still do, and conversely some people use finances to leverage power. Their money attitudes are emblematic of the larger issue: that they either feel insecure and struggle with low self-worth and/or they have unhealthy behaviour and attitudes that if it wasn’t money, they’d be showing their controlling ways via another means. Power and control is about perception. I’ve seen people without two beans to rub together control someone with money and vice versa. It takes a certain mentality more than the amount of money one has.

It can be very hard to ask for help or to trust your partner to lean on them when you’re very afraid of being just like ___________ {insert parent(s)/caregivers/significant person}. I talk to so many women who panic about not earning or earning less after having kids (or earning less full stop) and it’s not necessarily because their partner is controlling but because of what they feel is the loss of independence, looking like what they think is the ‘wrong’ type of woman, and critically, the vulnerability of relying on someone else.

If you don’t acknowledge what’s behind your baggage with money but also the bigger picture of what happened in your relationship with your ex, you will keep being triggered.

Even if you met a man who earned the same as you or who didn’t give a rat’s what you earn and who just loved you for you, if you don’t believe that you can have a successful relationship without having to defend you or without ensuring that you closely monitor the financial balance, this cycle will continue, as proven by your experience with Mr Wealthy. If your biggest concern was about how much you could afford to pay and your discomfort, you weren’t really present in those dates—you were too busy worrying about being ‘back there’ again.

Did you feel as if you owed him? Or that he was buying you? Wealthy people can afford many things but actually, they can’t buy happiness or people, a debate I always enjoy after watching An Indecent Proposal (great film!).

I imagine you felt triggered with Mr Wealthy because if your ex pulled off his malarkey by earning more than you after you had a child, you were closely associating this man’s significant wealth with significant control. In reality, it was just dates in posh places, not you signing over the leasehold on your self-esteem and ability to live. Only you know whether your discomfort reflected his behaviour or your projections.

You may think that making an internal rule, ‘Only have relationships with people who earn exactly the same amount as [you]’, protects you from the past but all it does is keep you tied to the guilt and pain from that experience plus even when you abide by the rule, the fear still remains.

Take some time to address the hurt that you experienced from that relationship and anything else connected to it, because whatever you each earn, you need to be secure in who you are and you need to be present. You are able to take care of you and your daughter, right now. Anyone who you choose to share a relationship with, is adding to your life, not taking over you and your responsibilities.

Each Wednesday, I help a reader to solve a dilemma. To submit a question, please email natalie AT baggagereclaim.com with ‘Advice Wednesday’ in the subject line. If you would prefer your question to be featured on the podcast, drop a line to podcast AT baggagereclaim.com. Keep questions below 200 words.

There's no need to be 'baggage-free' to move forward or have what we want
Fear of sacrifice, fear of commitment
You can change your version of normal at any time