Appearance isn’t the same as worth 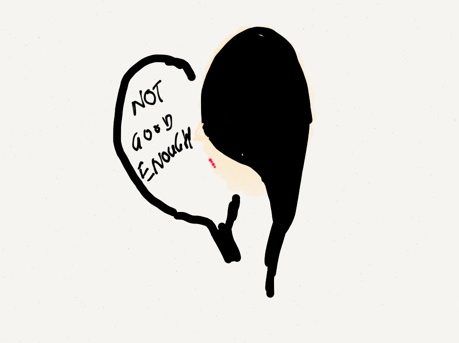 I’ve been having a number of conversations recently with people who are struggling with their self-image due to it being tied up in their appearance. The stories have a theme of believing that if they change certain things that that their lives will be so much better or that they’re doomed because they’re stuck with whatever it is that they believe that they can’t change. When you have a pattern of thinking about and behaving in ways that focus on your appearance (and possibly those of others), it stems from a pattern of being taught to overvalue and even be blinded by appearance. This means that you are highly likely when faced with difficult circumstances, to default to a line of thinking and behaviour that places a lot of the responsibility for the success or failure of something on your appearance. You may also find that you have a pattern of being involved with people who lack substance and who are even appearance focused. What results is that you end up in insubstantial relationships romantic and otherwise, where you’re subsisting on crumbs, or that you latch onto people who have ‘big ticket superficial items’ such as looks, status, money, charm, being a playa etc, and then when things go awry, you blame it on your appearance. To rely so heavily on appearance is to set you up for a fall, after all, image is transient and it’s also subjective. It creates an insecure existence where you’re not only living a life based on the fluctuating value of what you can attain through validation but you’re also debasing your own substance by neglecting what makes you, you – your values and how you live your life. Instead your identity is your appearance. When you don’t distinguish between your appearance and your worth, it’s the equivalent of inadvertently thinking:

If not, you need to realise that you’re not living congruent with your own values. If you want people to love you for more than your appearance, you can’t be superficial at the same time. The two things run counter to one another.

It’s also time to ask, is what you believe about appearance indisputably true? Blow some holes in your perception of your appearance, capabilities and options because you’re limiting you to skin and imagery. Water seeks its own level. Cart these beliefs around with you and you will focus on ‘evidence’ that supports your outlook because if you didn’t, you’d have to change your beliefs. When I believed that all I had was my appearance, I ended up in my most superficial relationships. After I left my most superficial relationship with some parting racist justifications from him about why he’d acted as he did, for the next few years I struggled with race mixed in with superficial issues. I believed that I had little or no value and made some awful choices as a result of that perception. I was ashamed of me. In the end, I had to stop judging me in the way that I so disliked people doing to me (or thinking that they were doing to me). I couldn’t and cannot expect others to do for me what I cannot even do for myself. And it is judging whether you do it to you or others. Your appearance doesn’t make you a better person nor does it make you immune or exempt from disappointment and difficulties and it’s not an open sesame to everything you want. There are people you would consider ‘less attractive’ who are happier than you and there are people ‘more attractive’ who are deeply unhappy.

Each time we make out as if the most attractive people have everything we want and that their life is so much ‘easier’, we’re implying that all someone with the right superficial goods needs to do is show up.

Appearance tells you very little about a person. Who they are and what they do does. Appearance isn’t the same as worth and relying on it for validation and your sense of self means that you end up self-esteem deficient and external esteem reliant. You’ll be dependent on the attentions of others and it’s an incredibly insecure existence. Appearance changes over time and much as we might want to, we also can’t stop the aging process, although we can certainly end up spending a lot of time, money and even our self-esteem trying to freeze our image. Let’s say that somebody says or does something to you and it is on the basis of something superficial. What is at ‘fault’ here? That particular attribute or that person’s attitude? Which would be a better bet for change? Your appearance or their attitude? Your perception of you or trying to meet one person’s ideal or some impossible standard of beauty peddled by people and companies trying to sell you stuff by tapping into insecurity? There’s no point in trying to control the uncontrollable or trying to convince and convert somebody into changing their attitude and values but, there’s a lot of a point in changing the way that you think about you. Your thoughts?

Love isn’t a reward for being a good person, and we don’t like this
Reader Question: How do you teach someone boundaries for a healthy relationship?
Getting To Grips With Sexual Values - Avoiding Sexual Insanity, Rewarding and Gratitude and more