Are you doing the other person’s ‘job’ in your relationships? 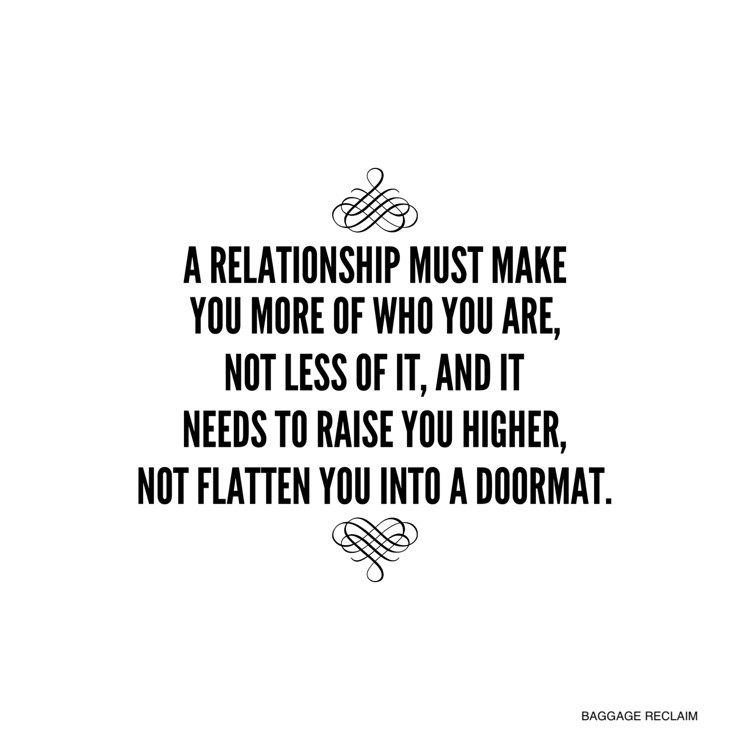 I hear from so many people who feel very put upon by one or a group of people. It’s feeling as if something won’t be done if they don’t do it or that it won’t be done correctly, or feeling that the expectation is that they ‘should’ do it hence they feel obliged to even though it’s not their ‘job’ and it’s really annoying them.

As I scanned my emails the other day, it struck me like a puck in the head:

What differentiates relationships that prosper and those that flounder, is that people who have relatively harmonious relationships, know their ‘job’.

Now, what I mean by this is, is that they know that their job is to be who they are and to show up in an equal fashion for a 100:100 relationship.

No one is superior or inferior and there isn’t one person underfunctioning and the other overfunctioning; they’re both able to be and take care of their respective selves and to be in a relationship from a place of love, care, trust and respect to contribute to the integrity, health and prosperity of the relationship.

It’s not about who is ‘the man’ and who is ‘the woman’, because aside from the fact that relationships are not purely between men and women, each time we define our expectations of a person based on what we define them as in relation to us, we not only make presumptions about what we and they are ‘supposed’ to do but we are not grounded enough to recognise our own and their humanness and to work with it to forge a relationship that respects who each party actually is.

A prime example of this is family tensions. Instead of seeing family members as humans first and foremost, it’s instead about, “You are this and I am that so we ‘should’ have a relationship like this and you must do that and I must do this”. Cue obligation and resentment.

When we are over or underfunctioning, our presumptions about the other party’s role stem from how we want to stay in our comfort zone, which could be performing seal pleaser or living in a level of chaos.

Overfunctioning results in us doing our ‘job’ plus someone else’s, or doing both ‘jobs’ half-assedly but feeling no doubt exhausted.

We’re training people into the perception that a job that’s not our job is our job or, we’re training them to believe that we are OK with doing something when we’re not.

Now, it’s annoying enough being the one who always cleans out the microwave or fridge at work, or who everyone assumes will volunteer or buy the gift or host or whatever it is, but when what someone thinks is our ‘job’ is to basically let them off the hook from having to lift a feckin finger in the relationship while we break our back, it’s soul destroying, even more so when we collude with them by obliging us to fulfil that role.

I hear from so many men and women who do stuff by default that becomes a rod for their own backs, or who out of fear that if they don’t cover the other person’s ‘share’, that they won’t step up, they decide to do ‘everything’ and to let stuff slide so that they can feel in [pseudo] control. They invariably languish in unavailable relationships. None of these people know their job or if they do, they’ve gotten sidetracked or clean forgotten it.

Their job is to be their grown-up selves and show up to do their part in co-creating a relationship. In order to do this, they must have a reasonable grasp on who they are, what they need and want–so a combo of values and boundaries.

Overfunctioners take on too much responsibility and underfunctioners, whether they admit it or not, put their responsibilities on others and typically gets away with that in their pattern until they meet someone who will not play ball.

Not knowing our ‘job’ guarantees pain and keeps us out of a loving relationship or sabotaging our happiness within one. Each party loses respect—self-respect as well as the respect of the other party.

Imagine a Mr/Miss Unavailable with a track record of ‘Fallbacks’ who all allow him/her to underfunction. Sure, we might feel special in our efforts to accommodate but look at the bigger picture:

We are one in a long line of partners who have to greater or lesser degrees, allowed this person to coast.

Once they realise it’s same ole same ole, even if it’s with us the newbie, their underlying inner frustrations, resentments, anxieties etc kick in and their existing pattern is validated.

Even the biggest bullshitters in the world know on some level that they’re not doing good by someone and after a while, us overfunctioning, while it coddles and protects them, it also reflects something about them.

One day, they might meet someone who does not respond in the same way as all the other men and women. They might test the waters to see if this person is serious and when this person effectively turns around and says, “Listen, I like you and everything but I’m not your mother/father/slave/groupie/fluffer/ or like all the other men/women who have let you get away with [whatever their shenanigans are]. Of course I’ll take care of you and I can take care of myself but you also need to do the same. If you want to be in a relationship with me, I will ask questions, I’ll expect you to be a person of your word, and I won’t be putting up with this whole airy fairy ambiguous crap or being censored about what I can talk about. Of course I’d be disappointed if you didn’t want to continue on that basis but at the same time, it would be wrong for us to continue if you want something different. There are plenty of men/women out there who can give you a no strings relationship or one that just bumbles along but that ain’t me”, it’s a jolt from their pattern. They might run for the hills or they might try to stretch themselves, not for him/her but for themselves in the realisation that they don’t want to be sheltered from their part in a relationship.

Equally, overfunctioners often meet people who do not want to be coddled and treated like the centre of the universe and their ‘parent(s)’, who effectively say, “Why are you doing that? I don’t need you to do that. Relax and be yourself. I love you as you are. I don’t know what went on in your last relationship but I’m not that guy/woman. What do you mean we can’t have a discussion because you’re afraid of criticism? What do you mean you didn’t want to say anything in case I ran off? Whadaya take me for?”

If a relationship is not mutual, halt.

A relationship must make you more of who you are, not less of it, and it needs to raise you higher, not flatten you into a doormat.

When you’re in a relationship where you ‘stay in your own lane’ (good boundaries instead of losing you), you trust you to be you and you trust the other party to do their part even if they’re going to do it in ‘their way’. They might have some figuring out to do, their might be discussions and even clashes as you figure out how to coexist harmoniously but what you’re never doing, is effectively going, “Oh, so you find being a partner too hard? Right so-how about I take love, care, trust and respect off your hands and never raise any issues with you again?” Because you know what?

People don’t know what their part or responsibilities are, if we’re doing it. They won’t know whether they can or whether they want to do it until there’s tumbleweeds where we (or others) used to be plugging the gaps.

You will never have to feel as if you sold you down the river if you let people do or not do their part.

If someone doesn’t want to be a partner in a mutual relationship but you do, you’re not a match. When you acknowledge this, you can let things go so that you can be open to someone who does, but you will not be able to do that, as long as you keep trying to make a relationship on your own.

Do you want to be in a battle or a relationship?
Birthday thoughts: 36 things that I've learned about life, love and self-esteem
If you feel bad after you 'help', it probably wasn't 'helping' (Why it's good to stay out of Other P...
Share this...