Are You On Standby? Why You’re Not Mr or Miss Last Minute Option 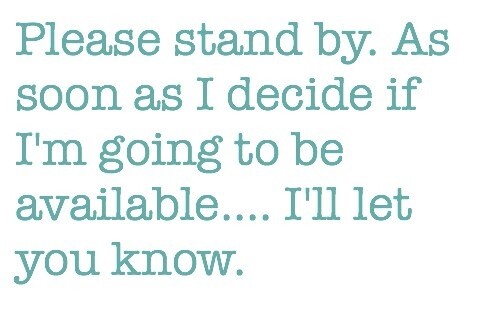 Over the past few days since I wrote about whether you’re ready to date again, there’s been a flurry of discussion in the comments about people who rely on making last minute plans under the guise of being ‘spontaneous’ and who when you try to make plans, or call them on their lack of commitment, get all shirty with you.

This is not what spontaneous looks like: You’re dating or in a relationship for a while and you only find out what you’re doing on a Friday evening or on the day that it’s happening. Plans are rarely if ever made in advance and when you try to, they’re difficult to pin down, so in the end, the decision for them to agree to your suggestion is so last minute that they’ve pulled their usual stroke on you again – passive aggression.

I’m all for seizing the moment but if the only time I hear from you is when you’ve seized the itch in your pants, or your ego needs some pumping, or when you’ve finally decided to get around to thinking of me and considering me in your plans at the last moment, I’d rather take a raincheck.Sometimes it’s nice to fly by the seat of your pants, but the type of person who relies on keeping you on ‘standby’ as an option to avail of and actually expects that should they choose to only spring their plans on you five minutes before, that you’ll drop everything, is someone who is like the seat of someone’s pants…after a bad day – shady.

Everything is contextual. If you have a healthy, mutual partnering and they surprise you periodically or you both decide to do things on the spur of the moment, that’s spontaneity. Them doing things on their terms and you being shoehorned into one way or the other is passive aggression.

Don’t be a passenger. If you’re not comfortable with being dialadate, then don’t. Instead of giving a big explanation or even a small one, just say that you’ve made other plans, which you should do anyway as leaving yourself as an option makes you a passenger giving people the option of choosing you, while you’ve already chosen them. They’ll either meet you in the middle and make plans, or beat it. Or…they’ll pretend to meet you in the middle and gradually eek it back to last minute, at which point you bounce them and walk.

Start as you mean to go on because really, you don’t have time to be teaching a grown-up to value and prioritise you. Remember – when you don’t allow yourself to be on standby, they can’t treat you like an option.

Your thoughts? If you have been reluctant to step up and make plans and have relied on them doing all of the ‘chasing’, read my post on why you shouldn’t make it the guy’s job to do all of the calling and making plans.

Personal Happiness: What do you want? Part Two
There's Something About Mr Unavailable - The Emotionally Unavailable Man
When someone blanks you / disappears & then reappears to ask a favour of you, it's OK to say no
Share this...