Are You Struggling With Guilt? Learning The Lesson & Changing Perspective So You Can Move On 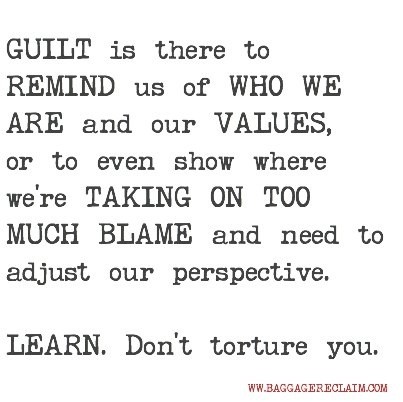 Guilt is one those emotions where if you don’t do something positive with it and/or gain some perspective, you end up persecuting yourself unnecessarily while your life begins to stagnate. Whether the guilt you’re experiencing is appropriate or misplaced, the fact that you feel guilty is actually an opportunity for you to change.

It’s important to remember though, that guilt is about feeling remorseful due to feeling responsible for an offence caused. As a result of my work I’m constantly coming across people who are struggling with guilt. What I find fascinating is that the people who need to feel less or no guilt experience excessive guilt while the people who could do with feeling genuine remorse and responsibility for their wrongdoings don’t.

You will know that you have a guilt issue if you tend be like high absorbency kitchen roll soaking up the blame in every situation and putting yourself at the centre of ‘everything’. You’ll know you do this if you have a One False Move Mentality and convince yourself that if you hadn’t done one thing, then everything else wouldn’t have happened. You’ll be like me who used to blame herself for her parents not being together…even though I was under three when they split up.

When you feel guilty all or a lot of the time, you’re rejecting you by taking on far too much blame which removes responsibility and greatly distorts your perspective. It’s like feeling so inadequate that you must be causing great offence – not true.

If there is something definable / tangible and contextually appropriate for you to feel at fault for, it is understandable to feel guilty.

This is the difference between…. feeling guilty because you got into a confrontation with someone and the conflict was the result of Yet Another Boundary Bust and you lost your temper and said some things that you regret… AND experiencing the exact same situation but feeling guilty not just for losing your temper and saying things that you regret, but also feeling guilty because you think that you have now done ‘everything’ or ‘most’ things to cause the relationship not to work. You stop seeing their part.

When you have done something that you in retrospect regret, if the situation calls for it, you can apologise / make amends or you just learn the lesson for next time.

I, for instance, learned from a series of situations where I pushed down my feelings and was passive and then ended up erupting in an angry tirade and looking batsh*t crazy was that if I stopped gritting my teeth, spoke up, and stopped busting my own boundaries, my experiences would change dramatically.

When you do the whole One False Move thing, you think that for example, your whole relationship or whatever situation imploded because you didn’t answer the phone on three rings, or you didn’t ask nicely enough, or you were ‘too confident’, or not patient enough, or wouldn’t ‘put out’.

There’s something you can learn here – if the things that you feel guilty about make you sound like you’ve been at the crack pipe or are things that other people expect as a part of treating themselves with love, care, trust, and respect, or are proud of, you definitely don’t need to be feeling guilty but you do need to get behind you.

Why the frick would you be feeling guilty about having a good job or earning really good money, or having friends or being talented? Do you seriously believe that not answering the phone quickly enough is a legitimate basis for guilt?

But you know, I couldn’t broach this subject without mentioning ‘superficial guilt’ and in some cases ‘borrowers remorse’.

You can’t keep saying that you feel guilty about, for example, an affair, if you’re not acting guilty and ending it. I’ve heard people say “I feel so guilty that I can’t give him/her what they want” or “I feel so guilty for treating them badly…” only to go back and do exactly the same or even worse.

That’s a problem because somewhere between the feedback of the guilt and actions, the mindset to support the actions to create a different outcome get lost.

Equally, what’s the point in doing something that you know runs totally counter to values that you profess to have but then only claiming to feel guilty when it becomes clear that the gamble you’ve taken hasn’t paid off? Prime example: It becomes clear that the person that you’re having an affair with isn’t leaving (there’s a surprise and a half) and you say “I feel so guilty about things. This was a bad thing for us to do. I think I should tell….” Er, NO. That ship has sailed and your guilt does not originate from an authentic place – you didn’t see fit to be telling them when you thought there was a chance of getting your way. It’s tough and trust me, I’ve been there, but sometimes we use guilt as an opportunity to unburden ourselves by passing it on. Afterwards we feel guilty for doing it which means being back to guilt square one.

Experiencing guilt is where you soon find out whether you’re a ‘doer’ or a talker or even a brooder. It will also show you whether you validate your own judgement or whether your tendency is to invalidate yourself.

When you process feedback such as guilt, you do something about it.

When you don’t process the feedback or you do, but in spite of recognising that the guilt is misplaced you hold onto it like a security blanket, you don’t act, nothing changes, and you can end up undermining you.

Guilt should force you to ask – What am I doing in this situation that is going against my values?

Or if the situation has passed – What can I and will I do differently next time?

Sometimes guilt doesn’t have a logical basis (like with the One False Move mentality) which is why you can feel a bit tormented when you can’t really see what you can do to relieve it, but you may just need to look at where the guilt is coming from. I hear from a lot of people who feel guilty about being pissed off (they don’t feel like they have a right to be angry and that anger is ‘bad’), or who feel guilty about having needs (they marginalise themselves and are used to neglect).

The solution in these situations isn’t to go back to a situation and go on mute and have no needs; it’s to address your feelings around anger, conflict, expressing your feelings, and also about why you have such low self-esteem that you feel guilty for having needs that others take as their right and as a basic?

That’s what guilt is there for – to remind us of who we are and our values, or to even show where we’re taking on too much blame and need to adjust our perspective. Guilt is not there as a paddle to whack yourself with and if you keep revisiting the guilt but not doing anything about it, you’ll end up obsessing which is a dangerous cocktail of blame, shame, and regret where you end up living in the past and trying to work out what you could have or can ‘prevent’ and then often doing things off the back of this rumination that only compounds your guilt.

Use guilt to direct you to where you can learn more about you instead of using it as a shield to prevent action while you keep looking to the past and wanting to fix that, instead of looking at where you are now and learning from the insights gained so that you can apply them to your present and future. Acknowledge, learn, and move on.

Disclosing Your Past and Insecurities
Obsessing & Overthinking - Processing the Evidence of your Relationship So You Can Move On
Understanding what makes you angry & why in relationships & post breakup part one
Share this...