Be Myself, Don’t Fear NO, Passive Aggression Is a No-No & Other Personal Commandments I Live By 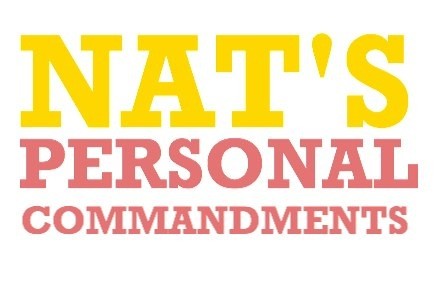 I turn thirty-five on Saturday! All of a sudden, I feel very grown-up, if not slightly panicky, that my thirties are zipping by at high speed. And as readers regularly ask me to share ‘rules’ or ‘principles’ I live by to continue growing my self-esteem and being happy, I thought it was a rather apt time to share my ‘personal commandments’. Think of these as guiding principles that I live by that help me live by my boundaries and values, guide me to personal growth, and keep my life low drama.

It really isn’t all that bad being me. It’s great, actually, as at least I know which way is up and when I do adapt, I’m not doing it based on false information. The worst times in my life have been when I’ve tried to be who I think others want me to be and when I’ve pretended to be happier than I feel. Being myself also means that by developing boundaries and values, I have my own distinct identity instead of identifying myself as the person who is the daughter with a father who is X and a mother who is Y. Or identifying based on my work or how liked I am by others or whatever. Basically, my identity is no longer displaced in others, which means my whole world isn’t about to come crashing down if I experience ‘rejection’ in any of these areas. Be you.

I have spent a year practising listening with patience and compassion to my own thoughts and body after struggling with tinnitus and vertigo. Listen to yourself.

Passive aggression is a no-no.

I’ve found that I can deal with NO or even ‘rejection’ but what will do me in is the whole actions not matching words and that person trying to get me to guess without putting themselves out. I know exactly who is passive-aggressive in my life, and I try to keep its impact on me to a minimum. Recognising passive aggression has actually helped me to overcome my fear of conflict because I just can’t bear the indirectness. It’s also helped me see that people really have their own issues and conflicts, which isn’t about me. Cut the passive aggression.

Is it a pain in the bum? Yes, sometimes, but at least I know where I stand. That, and I have less and less of a problem saying NO because if I don’t, I drown in Overdoing It Central. If I didn’t say NO but really wanted to, I’d end up being passive-aggressive and showing it in other ways. And it winds me up when others do it to me. So I don’t fear NO even though it may bring conflict. Don’t fear NO

I live by the I Don’t Give A F Principle.

It doesn’t mean that I don’t give a hoot about anything, but I can tell you, I don’t lose sleep over not being liked, especially as it’s most likely to happen with people I don’t know, value, care about or respect. So why go there? I can’t be liked by or please everyone. And I can’t torture myself over so-called ‘ideals’ of what being a woman is ‘supposed’ to mean or look like. I also don’t run around telling people about themselves, because guess what? I wouldn’t like it being done to me. Stop trying to be liked by ‘everyone’ and focus on being liked by you.

Own my own and let others own theirs.

This leaves me free to be responsible and accountable. I refuse to take the blame for Other People’s Behaviour, and I don’t get caught up in projection. This has been most beneficial with family, but it’s also helped me make peace with my old relationships. I can get on with addressing what I can control–me–instead of absorbing the blame for ‘everything’ and feeling victimised by my own thought process. Own your own and let others own theirs.

I can moan for England, something I’ve noticed recently. I’ve decided to cut down the habit – *cough* from tomorrow because Nia has played me up something else while we’ve been here in Amsterdam! Yeah, moaning makes for some entertaining conversations, but it makes an actual good day look bad. It clouds out even the smallest of good, and actually, recognising even the small things can dramatically change a perspective. I’m super grateful that my life has changed so much over the past seven years, but I have found myself needing to practice being present and just pause and take in what’s around me. Find a couple of things to appreciate each day. We spend too much time thinking about what we don’t have. Practise gratitude.

No selling myself short.

I must be proud of myself and associated with my achievements. This is something recent as well, and I’ve found that many of my female friends and readers are disassociated from their achievements, too. We don’t shout about what we do, hide our lights under our bushels, seek perfection and are our harshest critics. I get emails and phone calls from people (as in friends, acquaintances, etc.) going, “Er, I had no idea that you write Baggage Reclaim!” Or, “Oh my God! I have a friend crying here in my house with a book with your name on it! WTF?”

I appreciate every expression of gratitude, the big squeezy hugs from readers, the recommendations, yet, I still get nervous every time I press publish. And it’s taken me thirty-four years to realise it (Jaysus, I’m feckin 35 on Saturday). I have to tame the perfectionist in me and breathe. I also have to learn to make more noise about myself. No selling yourself short.

I’ve lived by this for several years now. This is especially so because I work primarily online, where truth be told, some people are not what they portray. There’s a lot of talking out of their bottoms. I don’t mind gossiping, but actually, I don’t do much of it. I don’t write things online that I can’t say to someone’s face, I don’t get involved in the bitchiness and ganging up, I don’t post my business up on Facebook or live on there, and I don’t get into slanging matches. I’m the same ‘in real life’, so it spares me a lot of drama. Be honest with respect, and take the chit-chat out from behind closed doors.

I’m on a low bullshit diet.

I‘m not good with fluff or lies. While I don’t need my life to be straight, no chaser, I also know that if I engage in denial, rationalising, minimising, assumptions that haven’t been sanity checked and excuse-making, I’ll be very unhappy. I just can’t pander to other people’s BS. Keep the BS low.

I can laugh about a lot of the things that, in the past, used to tear at my soul. It’s good to find the humour in life. I’m not ignoring any feelings or playing down anything. Rather, it’s that sometimes, when you see things for what they are without putting yourself in the centre of it, they can be hilarious. I don’t take myself too seriously, and if I’m not laughing, I know I need to chill out. If you’re not laughing, you’re not living enough.

Your thoughts? What are your personal commandments? If you don’t have any but would like to, based on your experiences and wanting to grow positively, what will yours be?

Guest Post: Holiday Survival for the Happy Single
Let the pain and the fallout be your turning point
Podcast Ep. 206: Let's Wait Awhile