Being Honest Isn’t An Automatic Precursor To Compliance 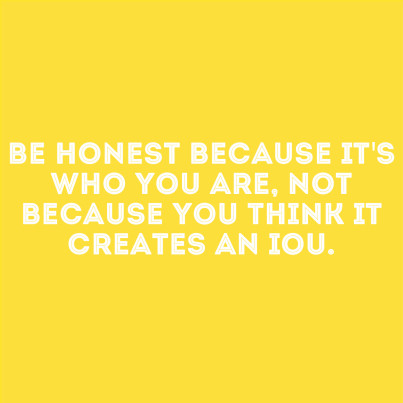 When I talk with some people, it becomes clear that sometimes it appears that honesty is ‘bad’. They have this negative association with what they view as honesty (in real terms it’s saying or showing the truth with respect) due to people not reacting in the way that they expected on occasions when they feel that they’ve been honest. Over time they’ve adopted a habit of not being honest by essentially saying what they think people want to hear and prioritising conflict avoidance… and then doing the opposite to what they’ve conveyed by doing what they truly intended – passive aggression.

Behaviour like this is driven by this belief that honesty about your intentions, needs etc., creates negative consequences and that if you don’t play your cards close to your chest then you’ll be penalised.

As I pointed out to one guy who felt dejected after the woman he’d been dating for a few months walked away when he admitted that he didn’t want a relationship, what is the alternative? Tricking someone into a relationship that you’re not actually in, to get what you want in the present knowing full well that there isn’t going to be a future? That’s disingenuous at best.

He still feels very rejected but this woman only turned down what was on offer. She liked him but she didn’t want to be in something that he had effectively written off no matter how he dressed it up. Sure she could have lied and said that she didn’t want a relationship either but it would only have compromised her in the worst way possible. She wasn’t saying or implying that she thought that they were ‘forever’ but what she was saying was that she knew her own limits in terms of hanging around someone who was so-so.

He is making the crucial mistake that many who struggle with honesty whether it’s the one or two-way variety do:

Having an expectation that honesty, even the type that communicates the inability to meet somebody’s expectations, needs, wishes or intentions that have previously been made known, should be met with compliance. This is unrealistic.

If you’re going to be honest, do so because it’s who you are not because you expect it to be an ‘Open sesame’ to getting everything you want. There shouldn’t be the expectation of brownie points for being honest and the reality is, you should want to be honest because it represents your values, not because you think it creates entitlement, because as soon as you do this it’s not honesty; it’s manipulation.

When you get mad at somebody because they meet your honesty with their own honesty, it’s because you would rather that they tell you what you want to hear, even if it’s not true.

It’s not that we get penalised for being honest; it’s that honesty is sometimes (but not always) met with honesty. The alternative (bullshitting and hoodwinking) is only an option for you if this is what sits well with your character but you can’t effectively expect to obtain goods under deception and come out smelling of roses.

And it’s not about being all or nothing or a ‘spoilsport’ either because the truth is, we can’t have it all ways. We can’t. Every time that we try to pretend that we’re not who we are or we make out like we’re more ready for a relationship than we know ourselves to be, we either eff ourselves or eff the other person up – neither one of these is a good thing.

When I talk to people who have a problem with being honest, it’s because they use so-called ‘honesty’ as their Get Out Of Jail Free Card as if “Everything I say after this admission means I take no responsibility” or they want to be patted on the back.

Being honest is saying or showing the truth with respect – you’re able to conduct yourself with integrity and make your position known, even if it rules out certain ‘convenient’ options when another party, in response to your honesty makes their own position known. You shouldn’t expect a bravery medal or a conflict free life but you’ll know where you stand and others will too. Life isn’t about being and doing what you think will get people to jump to your beat, because you end up being anything but authentic. Sometimes we need the truth to shake us off a path that we’ve stepped onto without due consideration, but if people tell us what we want to hear or we trick them, we don’t get that necessary feedback that we need to check in with ourselves or to adapt our behaviour and thinking where necessary.

Forget 'Mr. Good Enough', Mr Perfect & The Fairy Tale: Get Real So You Can Get Happy
My Guide to Being FWFs -Friends Who F*ck/Fumble aka F*ck Buddies
"There's no such thing as an honest cheat" and other thoughts on cheating