Being The Other Woman: The Lessons I Learned Part 3 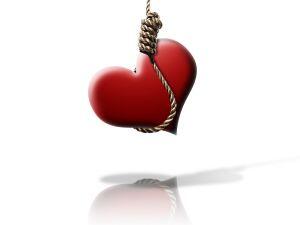 In part one, I talked about how you’re an escape from reality, that all the cheating guys are liars, that the situation is far from being unique, that these guys are manipulators, that they rarely leave their wives or girlfriends, and that as women we treat the dysfunctional relationship we have with these men like a competitive sport. In part 2, I explained how we’re responsible for our actions, how they remove our power, how we need to be in a dark place to be with them in the first place, that we have issues with commitment, that we do hurt even when we pretend we don’t, and much more. And now for the final part…

You have to make his wife or girlfriend real. Stop pretending that she doesn’t exist. Stop regarding her as the woman who is standing in the way of you being with the guy that is rightfully yours. Start regarding her as human. I used to refer to his girlfriend as ‘her’ and I noticed that on the rare occasions that I said her name, he’d wince. The more I got real is the more that I called her by her name and made her real for us both. I stopped regarding her as pathetic and weak and started seeing her as a woman, someone who is human and has faults and makes mistakes just like me. I realised that even if I put myself in her shoes and decided that she wasn’t an amazing person, who the hell was I to regard her so negatively when it was me who was sleeping with her man!

You also need to be real about what you’re doing. The damage that both parties do in this deceitful relationship is untold. I’m lucky that my guy didn’t have kids and hand on heart, I wouldn’t have touched him with a bargepole if he had! But plenty of women do and whether he has no kids, ten kids, a llama, or just a plain ‘ole wife or girlfriend, you are doing damage even if they don’t yet know about it. In order for me to be with him for our snatched times together, I had to deduct time from her, get him to lie repeatedly, and like all cheats, he was emotionally unavailable to both of us. Yes he did the ‘I love yous’ but like most men who are having their cake and eating it too, he talked a bloody good game but as soon as they walk out the door, it is out of sight, out of mind. They mean what they say as much as anyone who is being so dishonest in general can mean anything.

My mantra’s became ‘What’s in it for me?’ and ‘What have you done for me lately?’ and the more that I said this to myself, is the more that I realised that I had gone way off track. When you’re the Other Woman, you regard the smallest things as something big. If a guy who didn’t have a girlfriend or a wife did those things, you’d think he was having a laugh. That’s when I started looking at how we were when we were together and what he did and said, and it became clear that living the life of the Other Woman had nothing in it for me. If I wanted to cry on occasions like birthdays, Christmases, be quizzed about who I was out with, who I’d told about us, pretend that I was single, pretend that I wasn’t bothered about people feeling sorry for me being involved, pretending that it didn’t often feel like wham, bam, thank you mam as he kept his beady eye on the time, then clearly there was plenty in it for me. But in reality, the good stuff is tipped severely in his direction and he reaps all the benefits whilst your own life goes down the toilet, or at the very least remains in limbo. 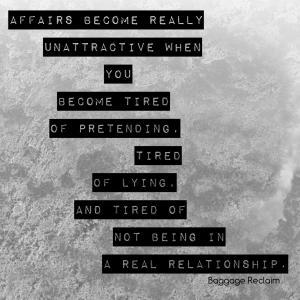 I realised that I didn’t want to be with a liar or a coward. It all just became a long, drawn out ordeal and it became clear that he was too scared to commit to being with just her and was equally too scared to commit to being with just me. A very typical commitment-phobe and not exactly a great candidate for happiness. That is the reality of the attached man that is in no danger of leaving his wife or girlfriend but tries to have the best of both worlds.

Men like to have something to go to and they don’t like to feel like bastards. They’re hoping that she does something sooooooooooo bad that it gives him the perfect excuse to walk away. They can’t ‘just finish it’; there has to be something really wrong. He can’t just have met someone else and fallen for them because in their minds, that’s a really bad thing to have to tell someone and easier just to screw someone behind their backs. They say women are illogical (so not true) but that’s nothing compared to the cheating man.

Good, decent men sort out their old relationship before they move on. There can be a slight overlap, but good decent men don’t try to have the best of both worlds by cheating on a partner for months or years at a time. There are plenty of men out there that will grow their nuts and go and sort out their stuff so that they can be with the woman that they’ve met. A decent guy will leave you be and come back when his house is in order.

And that’s really what is at the heart of this. Loving someone takes a leap of faith and a man that wants to find out what you both potentially have in store for each other will grow some nuts and take that leap. Anybody else who drags out the saga for months or even years on end is trying to figure out what he wants on BOTH of your time and if so much time has passed, you have to wonder how much they can really feel. My ex is still with his girlfriend and every single cheat that a friend has been involved with is either still with the wife or girlfriend, has been thrown out, or is with someone else. Yes, occasionally it works out, but for the great majority, it doesn’t.

Check out part two and part three of this post.

Advice: He's miserly with his time, money, and himself
Why Affairs Are Like Being Double-Crossed In A Heist
Advice: Help! Is it wrong to have expected my ex to set some boundaries with his interfering female ...