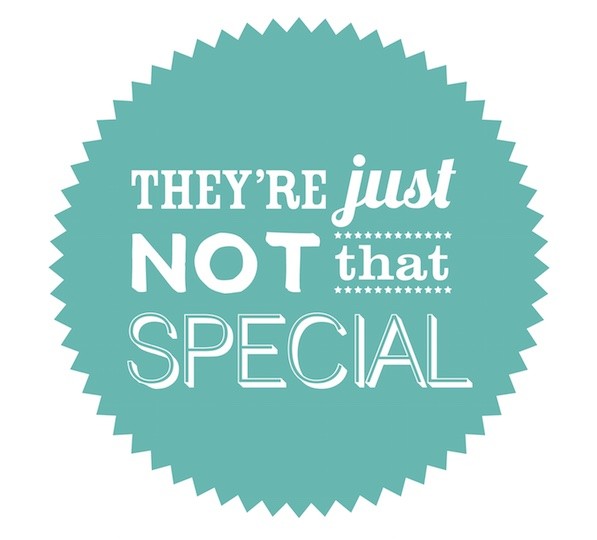 There is such a thing as exaggerating the hell out of somebody. When we don’t feel that great about ourselves and we also on some level recognise that we’re putting up with less than palatable carry-on, we pump people up. It’s like, I know that you’re not the actual centre of the universe but if I treat you as if you are, you will feel so good that you will love, validate and appreciate me. What possible reason would you have to leave me when I’m willing to make you look this good no matter how you behave?

When we truly love somebody, we don’t need to exaggerate them. If anything, we put people on pedestals and keep going on about how great they are when we’re trying very hard to hold on to an illusion, after all, if somebody is truly that great, why aren’t we living that greatness with them? It’s not because we’re “not good enough”; it’s because who we think they are isn’t real just as the magnitude of our so-called flaws isn’t real either. We protest too much.

We roll out descriptors like the Best Guy/Woman Ever or The Goddess or Best Male Friend or whatever, because if we didn’t refer to them as this, we’d have to admit that we’ve been putting up with some pretty bad treatment plus we’d also have to let go of our ideas about this person, admit who they truly were and are, get into the present, grieve and begin to rebuild our lives with a kinder, more compassionate view.

It’s why when we’re in a casual relationship – oxymoron alert – or we’re involved in an affair – exorcism alert because it will bring up every ugly feeling or thought we’ve ever pushed down – we claim that they’re our “best friend” or like I did, “Best Male Friend”. We forget that we weren’t ever really friends in the first place or that if we actually delved under the hood of the friendship and examined what it contained, we’d see that it’s very imbalanced with a passenger and a driver, where it’s effectively all on one person’s terms and reliant on us pumping them up by extension of our fawning over them and insisting on our love no matter how badly we’re treated.

This so-called friendship allows us to be kept on a string and we end up playing armchair therapist, ego stroker, chauffeur, nurse, bank, bed partner and more in an effort to show how dedicated we are.

We claim that we know this person really well, that we have an intimate relationship and that we know things about them that no one else knows, except for that they also don’t tell us stuff either and we’re often the last to know when it comes to information that would certainly cause us to question our allegiance to them. They neglect to mention that they’re sleeping with other people, or that they really are not interested in a relationship, or that they’re having a baby, or that their idea of friendship is very different to ours.

When this person is no longer in our life, we continue calling them The Best Guy/Woman Ever because all of our hopes and expectations are tied up in them so it’s as if our last chance saloon is gone, but what we’re really doing is delaying letting go so that we don’t have to face forward. We don’t want to look ourselves in the mirror. We don’t want to get to know us. We don’t want to know where the pain comes from (the past). We don’t want to admit that we think of this person in the way that we do because we saw them as a chance to become special at last. We’re afraid that if we admit the truth then it will mean that we’re really not good enough because we were only thinking of us as having worth when we were in the relationship.

One of the dangers of getting involved in these faux friendship situations (casual sex and mistreatment masquerading as legit friendship) is that each party makes a dangerous assumption:

It does hurt when we’re not appreciated, respected, cared for and loved by a person who we feel as if we’ve invested a great deal in and who let’s be real, our whole dream is banking on– and it is a dream because at some point we’ve stopped being real with us about who this person is (an ordinary human being) and what we’re putting up with. We have to examine our motivations because on some level we exaggerate people because we want them to do the same with us. We put up with poor treatment because we hope it will activate their conscience and cause them to do better which would also cause us to be made the exception to the rule. We feel cheated because in our mind, we would not treat someone who behaved like us in the same way. We also feel cheated because we feel as if we have met all of the conditions to be chosen or for this person to act differently and they haven’t. We then feel owed or we feel bad because it feels as if we’re “not good enough”.  We feel that in spite of doing all of this stuff, we just didn’t cut it.

The problem is how we see the problem. A friendship is a mutual relationship between friends. Sure, we can be friends with someone we love but once romantic inclinations are in the mix, it is not a friendship. It’s also not a friendship when one person sees the other as a means to an end, even if they won’t admit it. No friendship truly prospers from one person dining out on the fringe benefits of what the other party provides and a true friend is not comfortable with a friend mistreating his or herself in order to keep the friendship going.

Also, we have to start asking ourselves whether we see someone as being that special because relative to other experiences, it was like getting a cracker in the desert after not eating for several months. When we’re starved of affection and attention both from us and others, a crumb can seem like The Best Loaf Ever.

It’s incredibly unfair to judge us based on a perspective gained from exaggerating a person. When we put people on a pedestal, the only place to look at us is from above and the more we pump them up, the more we shrink ourselves. We have to ask ourselves why we can’t be great too. Why can’t we?

We’re looking for something out of this friendship that can’t be gotten – by invalidating us as well as showing lack of respect, appreciation, trust, care and love for us in our efforts to be a ‘friend’ to this person or to exaggerate them, we’re creating a much larger void. They are wrong to behave as they do but we have to draw a line and stop putting us in the front line of pain and hoping to get paid back with love. We must be a friend to us first and learn where to positively invest our good qualities. These situations we put ourselves in are not love never mind friendship.

If you have a Best Guy/Woman Ever in your life, they’re just not that special that you have no worth without them. Stop pumping them up!

Wanting romantic relationship status more than being a loving partner
Feeling Anxious About Family Obligations and Expectations During the Festive Season? Here are 3 Tips
It Doesn't Have To Be So Scary In a New Relationship
Share this...