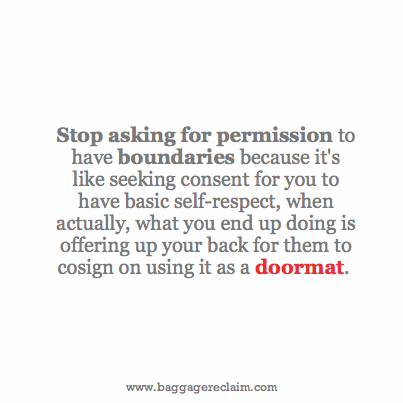 One of the biggest concerns that people who are ‘boundary averse’ have, is this fear of the potential for conflict to arise. They bust their own boundaries out of fear of scaring ‘everyone’ off and even feel that people who have boundaries and who for instance, say NO when up against unacceptable behaviour when dating must be very lonely people, neglecting to recognise that actually it’s a pretty lonely existence to be surrounded by people who essentially walk all over you and who you suppress who you really are so as not to jeopardise their approval. When these people attempt to make their line known it’s like they want permission.

“Is it OK for me to have this boundary?”

“I want to have this boundary but only if you’ll still like me”.

It’s understandable when you’re a child to seek authorisation from others and if you’re not brought up in an environment where healthy boundaries are communicated and your family actually want you to grow up with some autonomy and sense of self, you can end up growing up with a fine line between authorisation and approval. If it was a very unhealthy environment, you may have been taught to seek permission from people who have authority but who also abused their authority. They had all of the power.

As an adult, it’s really important to ensure that you don’t continue with a mode of behaviour that may have worked for you to keep the peace when you were a child but that is actually working against you as an adult and effectively keeping you like a child. You may be going out there relating to people with the same default habit of looking for combined permission and approval and this will also leave you in the precarious position of taking a more submissive role in your interpersonal relationships. Seeking permission automatically designates authority to others.

You do not need permission from others to have boundaries. Stop asking for it because it’s like seeking consent for you to have basic self-respect, when actually, what you end up doing is offering up your back for them to cosign on using it as a doormat.

Exactly how many people are asking you for permission on how to live their lives? You’ll note that the people who bust boundaries have their own boundaries. You just try and do things your way and see how they aggressively or passive aggressively make their line known.

Believe me, as someone who has really only known about and incorporated boundaries into her life over the last 7/8 years and who when I look at my family and the generations of issues that are rooted in serious boundary issues, I am all too familiar with the fear of ‘scary’ consequences but I’m more frightened of selling me short and being in some sort of emotional hell. One by one I’ve stood up to people in my life who at one point I would have been terrified of. I’m not a child anymore. Neither are you.

I hear from so many people who keep ‘friends’, lovers, exes, and family who they not only have unhealthy relationships with but who they’re unable / unwilling to have ‘active responses’ in their interactions with these people – i.e. they don’t represent their own values, needs, wishes etc by asserting their boundaries.

They might spend a lot of time talking and discussing and plea bargaining. They might say or do nothing. They may try to passive aggressively shift the people to their agenda but these are all passive responses that take the path of least resistance – avoiding asserting those ‘dreaded’ boundaries.

Problem: If someone is overstepping your boundaries and you’re more worried about losing them out of your life than you are about the issues that arise from not asserting your boundaries, they will continue to bust your boundaries because there’s no real consequences and you essentially seeking their permission/approval gives them power. So you’re still unhappy and you’re surrounded by people who suck the life out of you.

Seeking permission for your boundaries is not only approval seeking and ducking out on your own personal responsibilities, but it’s self-censorship. It’s like you override your inner voice, your true self, with this disapproving voice that chimes in with, “But don’t you need their approval?” or “Can you really afford to go around flushing people? Do you want to end up with cobwebs in your pants, lonely and being found dead in your apartment after three weeks being feasted on by cats?”

The only permission you need for your boundaries is yours.

When you cut the if’s, but’s, maybe’s and ‘should’s’ and stop fighting your right to have self-respect, boundaries become second nature. The truth is, I can think of a number of occasions where me having boundaries has been met with disapproval, but I can think of many times when they’ve been met with respect. The more you practice having boundaries, the easier it is to deal with an issue should it arise and ultimately if it does, it’s not because you having boundaries is ‘wrong’ but because there may be a misunderstanding or a conflict of values. Boundaries are like muscles – you don’t build up strength by not using them and they’re not going to magically appear without any intervention from you so give you permission to lift your self-respect.

People-pleasing and the fear of 'inconveniencing' others
Don't explain someone's disrespectful behaviour to them
What's your relationship deal breaker?