Ceasing To Engage Doesn’t Mean That You’re a ‘Loser’; It’s Another Way of Standing Up For Yourself 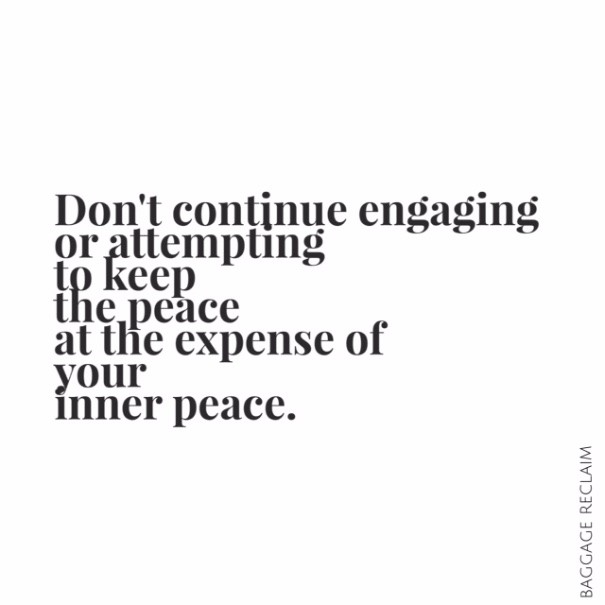 When you decide to stop engaging, it’s not about letting the other person have their way and him/her ‘winning’; it’s about remaining true to yourself. I hear from people who are in some pretty awkward and downright painful situations where they would step away but they block themselves from doing so because they don’t want to let the other person ‘win’. It’s vital to recognise though that the cost of continuing to engage can be too much plus, it’s not worth losing yourself or compromising on what you believe, just to prove a point.

If you don’t want to ‘lose’, don’t do things that cause you to lose yourself or to spend your time doing variations of the same thing and expecting different results. Don’t try to get a Ph.D in trying to figure out the person to the nth degree or take up a vocation in people pleasing with a slice of humiliation.

Whoever this person is that you’re continuing to engage with at the expense of your well-being, they’re really just not that special. They’re not king or queen of the universe, God, a higher power, or the definition of you. It’s not worth engaging or doing things in an attempt to pacify them and keep the peace, at the expense of your inner peace.

One of the things that I ask people who feel damn near tortured having to deal with a bullying and/or narcissistically inclined coworker with an over-inflated sense of their own importance is, Isn’t it sheer madness to spend a whole load of time, energy, emotions and money just on coping with being around this person? Sure, exactly how much frickin’ energy have we got left for ourselves, to do our actual job, for our other relationships, if the overwhelming majority of it is spent anticipating drama, dealing with the critic in our head, managing this person’s ego, and micromanaging our every move in an effort to protect ourselves or to minimise pain? That’s not living! What are we going to do when the mental and emotional stress of what we’re dealing with on a daily basis takes its toll on our mental, emotional and physical health?

Choosing to let people crack on with their drama (without you) or removing you out of a situation doesn’t mean that you’re a ‘loser’; you’ve got to know your values and priorities. Is your well-being really worth battling with someone who is really in an even bigger battle with themselves?

We think that we’re trying to show someone that they have misjudged us.

We think that we’re being empathetic and recognising the issues behind their bad behaviour.

We think that we’re battling through.

The problem is that in our efforts to show that they’ve misjudged us, we end up pandering to their ego and giving them the impression that we think that their opinion of us matters. They interpret it as a weakness.

Yes, we often are being empathetic although sometimes this can cross into over-empathy where we stop seeing them clearly because we insert too much ourselves or our moral outlook. The problem with not making our boundary clear and standing up for ourselves is that the person who repeatedly crosses boundaries, who relies on making others feel small in order to feel big, and who is too busy only seeing things from their rather distorted perspective where respect of others doesn’t really come into it, doesn’t know what the boundary is (because we keep making concessions) so actually thinks that their behaviour is OK.

And yes, we are battling through but at some point, we do have to decide what we truly want, need, and expect in life because if what we’re doing takes us out of alignment with our values, what’s the point?

This is the vital thing about criticism especially criticism from those who feel the need to keep letting you know their opinion: Criticism represents one person’s viewpoint.. It’s their perspective on how they would like us to do things.

How they want us to do things, how they judge us, is not how ‘everyone’ sees things and no person has the right to impose their opinion. We can take useful feedback but criticism from respectful sources is never tied to ruling a person. Somebody who shares respectful feedback in the form of criticism wants to see us do better but is not a stakeholder in it.

Don’t keep sticking at something just so that you can try to influence or even control their opinion of you.

The more that you try to convince others is the more unconvinced of you that you become.

I hear from people who are bullied at work or school or university or even by a friend or family member, as well as hearing from a hell of a lot of people who just keep swallowing down other people’s opinions or trying to defend their corner. They stay at the job, stay silent and pretend that they’re coping, or they keep trying to appeal to that person, because they worry that if they leave or stop engaging, that the person will think that they have one over him/her.

If this is you, don’t look at things from a position of being inferior or superior; compassion for you will help you see things for how they really are. No, this isn’t how you treat people and no you don’t deserve to be treated this way but ironically, their behaviour isn’t really about you. They often feel irrationally threatened and even jealous and because they’re coming from a place of defensiveness and even seeing people as a means to an end, if you don’t behave this way, you’re regarded with suspicion.

The thing that you have to do is to be careful of taking people at face value and judging the situation based on how you would do things because it can be pretty unfathomable to you that a person would think or act in a certain way but the world isn’t full of clones of you. We’re all coming from different levels of awareness impacted by our experiences, fears, motivations, beliefs, ideas and more.

Seeing the differences in people allows you to be boundaried rather than treating the person who busts your boundaries in the same way as the one that doesn’t. That’s how you remain open to BS and pain.

You also must be careful of engaging with this person because they remind you of someone significant from your past, e.g. parent, sibling, bully, because trying to meet unmet needs and right the wrongs of the past will cause you to live in the past and keep you small. If anything, this is an opportunity for you to stand up for your present and younger self, not to get the validation that you’ve always wanted from the original source of your pain.

Stop mistaking their behaviour for strength or power over you. Don’t offer them your back to put their foot in and don’t cower as if you have to pussyfoot physically, verbally, mentally and emotionally around this person. As someone once said to me, “Be the lioness (or the lion)!”. Don’t act as if you don’t have a right to be here and definitely don’t keep letting people think that they’re an authority over you in the sense of dictating your worth. You can be more boundaried and choose to keep a distance, or you are well within your right to opt out. It will not make you a ‘loser’; strength comes in many guises including having the courage to do what is right for you even in the face of adversity and the possibility of other people’s opinions. You are the only one who has to live in your skin and make your journey so don’t let anyone dictate where and how you spend your time or what you put up with. Stand up for yourself.

In episode 14 of The Baggage Reclaim Sessions podcast (due 4th December), I’ll share tips for dealing with bullying coworkers which apply really to anyone who imposes themselves upon you.

Also check out the 30-day projects, Embrace Healthy Boundaries and Tune In To Your Inner Voice (& Calm Your Inner Critic). Both are guidance on standing up for and showing up for you both internally and externally.

Getting To Grips With Sexual Values - Avoiding Sexual Insanity, Rewarding and Gratitude and more
Podcast Ep. 170: Conflict & The Five Stages of Relationships
When Mr Unavailables and Assclowns Drip-feed You Info Part Two