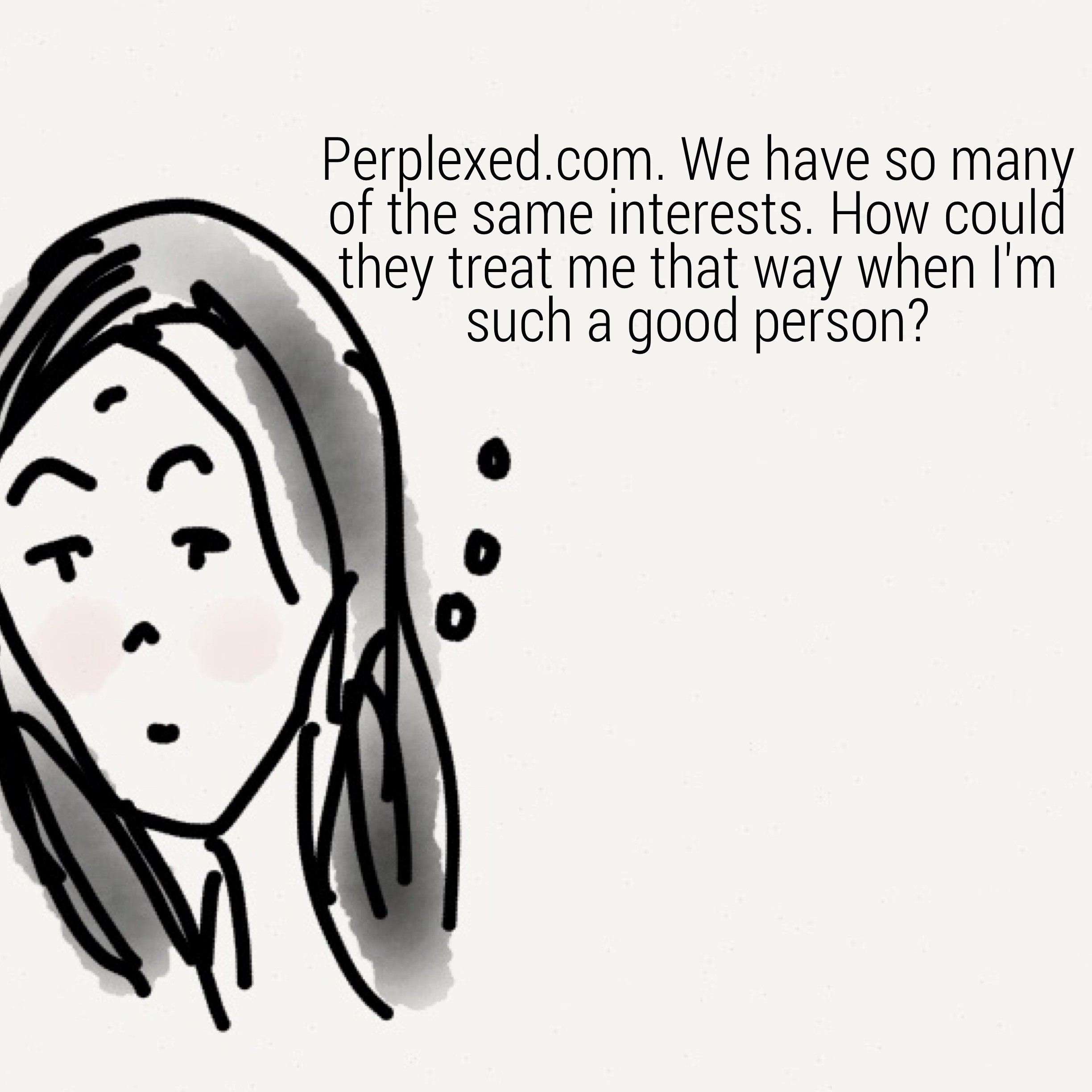 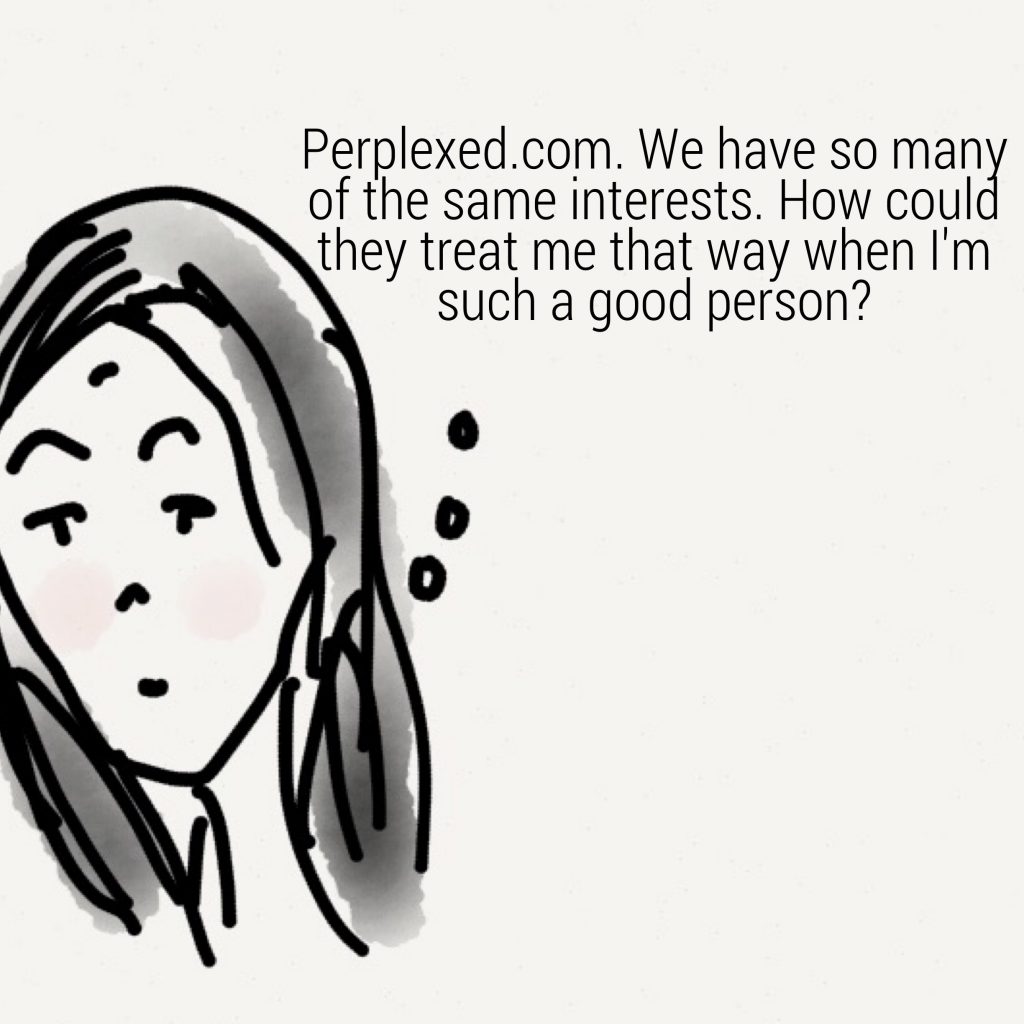 It might not feel like a big leap in thinking to assume that someone who shares similar interests to you also shares similar values. In practice, though, it’s an enormous one. It ignores the fact that someone can have a fundamentally different character and set of desires to you despite working in the same field, or enjoying the same shows, hobbies and interests.

It’s based on a underlying belief that you having these interests is linked to your values.

Let’s think about this for a moment…

Let’s imagine that you’re a wine buff that travels to as many vineyards as possible to fine-tune your palette. You’re also into growing your own food, 90s hip-hop, skiing in the winter. Maybe there’s windsurfing in the summer, salsa at night, and reading about globalisation. You then meet somebody who enjoys all or most of these things. Eureka!, you think.

On some level, in these situations, we tend to imagine that the combination of things that interest us is obscure enough that meeting someone who ticks all or most of those boxes makes them our soulmate. Surely they’re the same as us, right?

Going deeper now, you might be loyal, conscientious, caring, honest, loving, hardworking, ambitious and more. You at some point want to settle down and enjoy a long-term committed relationship. You’ve tried casual, but you value monogamy and are ready for more intimate relationships. Here’s the thing though: The fact that you have the above interests bears no correlation to your values and aspirations. You’re not, for instance, a wine buff who loves 90s hip-hop because you’re loyal, conscientious etc; you’re a wine buff who loves 90s hip-hop and is loyal, conscientious etc.

Those interests don’t speak for your character; they tell you what your interests are. Don’t conflate common interests with character or shared core values. 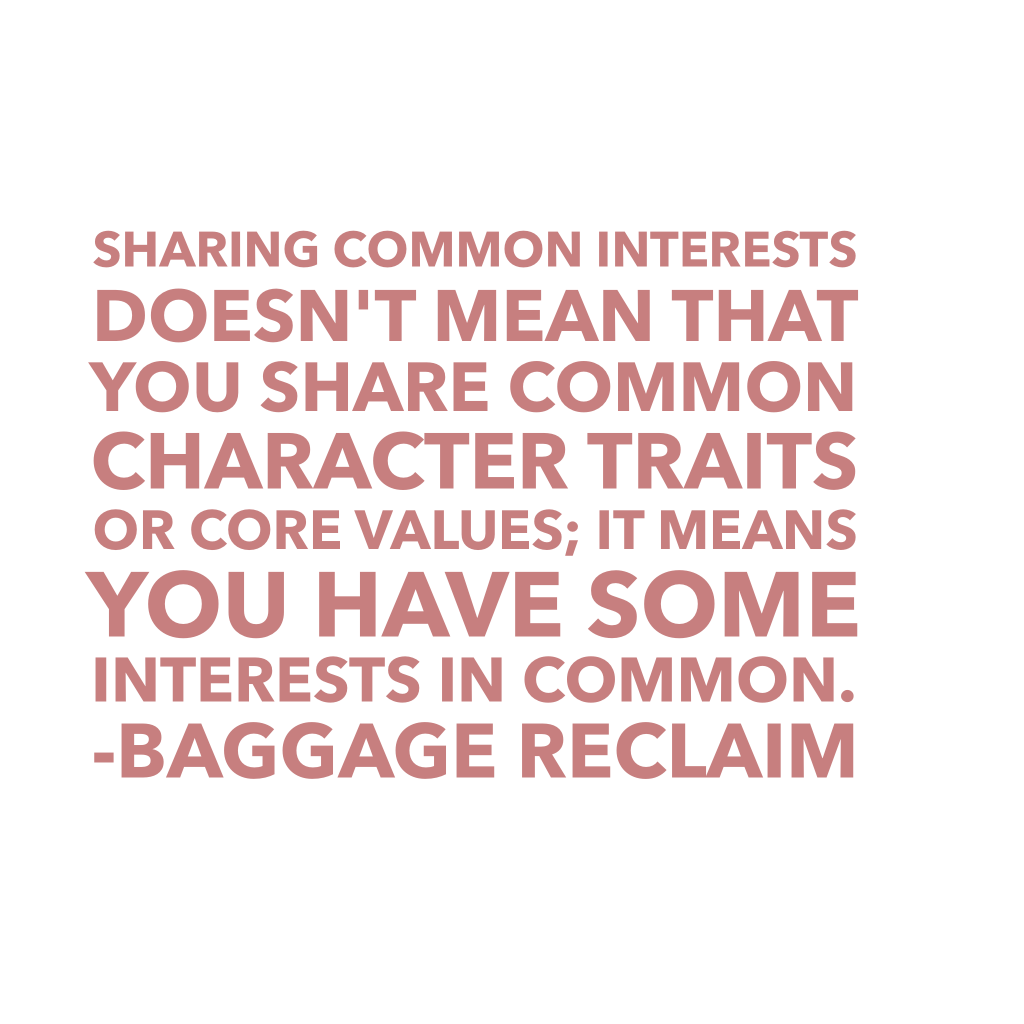 People of certain character, don’t have certain interests. They don’t. I’ve heard from so many vegans, vegetarians, environmental campaigners, charity workers, etc. They were all perplexed at being burned by their “own kind”.

Sometimes we think that we’re making a statement with our interests. It’s as if the idea of–oh I don’t know–having to stretch ourselves and step out of our bubbles and get to know somebody who isn’t our mirror or who has different interests, is terrifying. Why?

Because we make the mistake of believing on some level that if people don’t share our interests and even our values, then it calls the validity of ours into question.

It’s as if someone being different is a trigger for self-doubt. It’s the fear that somebody with different interests might cause people to reach unfavourable conclusions about us. We see this with people who are scared to go out with someone who doesn’t have the same IQ or intellectual interests. Same with when somebody doesn’t score the same or more on their beauty scale.

Someone could share all or most of your interests and still be the opposite of your core values.

Those interests will ensure that you have a good time together to a point. You’ll also have something to talk about. But, if their values are the opposite of those you embody or are working towards, your relationship will not work. You will run out of things to talk about that relate to adding depth and strength to your relationship. You’ll be with a wine buff, 90s hip-hop loving person who you cannot rely on. They won’t want to be and do the things that stack up to a mutually fulfilling relationship.

If they don’t share your core values, the ones that speak for your character and also the direction and depth of your life, you’re just play-acting at a relationship.

You’re effectively trying to make a pig’s ear into a silk purse. They might make a great ‘casual relationship’ (oxymoron alert) partner, friend or colleague, but to commit to a long term romantic relationship with? Um, no.

We trust people who share similar core values to us.

Not only will you undermine your own progress by pushing for something that they cannot give you or by trying to impose your values on them, your efforts will also undermine the love, care, trust, and respect.

I was adamant that I wouldn’t be involved with a guy who liked sports, especially cricket (negative associations with my father and one particular ex). I also didn’t want a sci-fi lover, IT geek or what I used to call a “p*ssy Pisces” (more negative associations). Who am I married to? A Piscean that works in IT who will pretty much watch any sport (currently nodding off watching the frickin football). During the cricket season, he tries to keep the telly on all night so that if he wakes up, he can see the score straight away. He’s recently been watching Stargate Atlantlis all over again (how many times can this man watch these feckin series?). Whatever sci-fi show there is, he’s watched it.

He wasn’t looking for a woman who was into these things (and he didn’t get one).

Incidentally, I rarely hear men saying that they can only be with a partner who shares all of their interests. It’s not as if I needed to be with a man who takes an interest in collecting vintage books and toys, crafting, sewing, a spot of pilates. He doesn’t need to enjoy thinking and talking about human behaviour and interpersonal relationships as well as creating stuff on the internet. We take an interest in each other’s interests, and we’ve gathered shared interests along the way, but what we ultimately share is love, care, trust, respect and core values. This leads to a shared life.

Don’t let interests blind you to someone’s character. Always take an interest in character, values, and having, as a bare basic, mutual care, trust, and respect.