Dating: He hasn’t made a move – What the..He’s gone back to his ex. Lessons on how to avoid being an emotional airbag 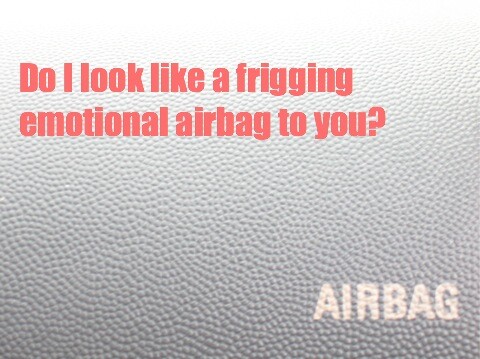 I was speaking with a friend of mine recently who was quite bright and breezy as she was dating a ‘nice guy’ that she was introduced to via a work colleague that had been itching to matchmake them for ages. They’d been on three dates, he was calling and texting a lot and initiating the arrangements. So far so good. Then she said that they hadn’t kissed, there had been no affectionate gestures beyond a quick peck on the cheek when saying goodbye but that he’s “obviously a gentleman and wants to take his time”. Cue me holding my breath and praying the she didn’t ask my opinion. She did.

So here’s what I said “My spidey senses tell me that something isn’t right here. I don’t know of many men, never mind 39 year old ones that would let a 3rd date go by and leave it ambiguous enough that you wouldn’t know if they were interested. Not so much as a snog? What is he? A monk?”

I’m not suggesting he needed to be all over her like a rash, but their dates were ambiguous enough that she wondered if they were just “friendly get togethers”. He couldn’t even get his arm up enough to hold her hand! My gut said there was someone else in the picture – literally or he was just out of a breakup. I kept it zipped. She insisted he was “shy” and “sweet” but did agree that she would suss out where his interest lay on date four. Unfortunately it never happened.

After being like clockwork with the texts and calls, there was zilch for a few days so she decided to take the initiative and texted him on the Thursday morning. On Friday morning she gets an email which basically thanks her for the time they spent together, tells her what a great girl she is and how she’ll make some lucky guy happy (yawn), and that he’s been talking to his ex and has decided to give it another try.

She felt very hurt and used and was actually caught out by just how upset she felt although I think it’s the confusion of being set up and then feeling like you’re part of a shady setup. I was curious as to why her colleague was going on about this guy so much and what had stopped them being introduced for so long – a girlfriend. She admitted that she ignored her gut instinct to steer clear when her colleague mentioned that this guy had finally broken up…from a long distance relationship in South America. They were introduced via email and it took weeks for him to get in touch. Unsurprisingly, that same colleague can’t meet her eye and is doing his best to avoid her. So what can you learn from this dating experience?

1. A recommendation and introduction is great but you still need to do due diligence. While there are some people who have a great mentality about setting people up, we don’t all come from the same place and live by the same standards, and some, quite frankly have a weird agenda. I say this as someone who was set up with a guy that a friend said she would marry if she wasn’t married already – he was a pot smoking, Freddy Kreuger finger nailed, leering, outrageous twit. This ‘colleague’ seemed to think that my friend would be the perfect replacement for whatever woman this guy was fixated on abroad. I told her to say “Thanks for recommending me as an emotional airbag”.

2. Steer clear of recent breakups. You won’t always find out until you’ve started talking or been on a few dates, but if the breakup is recent, do yourself a favour and step away from the light. Remember your last breakup? Remember how you or they called, one or both of you was flip flapping having second thoughts? Awkward emails/texts were being exchanged? There might have been ‘talks’ and ‘debriefs’. The breakup may have originated out of frustration. Whatever – unfinished business is what a recent breakup looks like.

Unless you want to turn yourself into an emotional airbag to cushion the exit out of a previous relationship or a cloth to soak up the excess from their breakup, step away.

There should be at least a month, ideally two to three between relationships, otherwise you will be the emotional airbag that provides the bridge…to another relationship without you. If they tell you they’re over someone who they broke up with a week or two before, remember that…when they get themselves over you that quickly. It’s either that or they stay in relationships long past their sell by date and get over them before leaving… If you still feel like you want to stay, go very slowly.

3. When someone is interested, you know about it. You can be shyly interested – that’s different to being so reserved you wonder if you’re embarking on a new friendship.

4. When someone says “I think you guys would be really great together”, it’s not a bad idea to ask why especially if they keep insisting on it and won’t leave it be. Don’t be afraid to ask what their current relationship status is when they’re waxing lyrical about them.

5. If it takes weeks for them to get in touch after an introduction, I’d question how interested they are. When the boyf got my number from my friend, he had to go to America a couple of days later and made sure that he communicated that before he left, so I knew that I’d hear from him when he got back ten days later.

6. It’s good to branch out from your ‘type’ especially if you have a type that’s yet to yield you a successful, healthy relationship or creates a lot of pain for you. However make sure you’re not playing The Opposite’s Game and you still need to be self-aware, listen to your instincts etc.

7. Don’t deny, minimise, and rationalise information you are getting via someone’s actions. You are not that desperate for a date or a relationship that you need to talk yourself out of what your gut, eyes, and ears are telling you. You’ll just end up on fake dates and if it gets that far, a fake relationship.

9. Someone who is fresh out of a breakup and already talking to their ex is probably going to be reluctant to ‘do’ anything that’s incriminating. Rather than Ross’s ‘We were on a break’ they can say Clinton’s ‘I did not have sexual relations’ or in this guy’s case I can imagine him saying ‘I didn’t even hold her hand or kiss her’. Nobody is that nice or that much of a saint so if they jump from your touch or won’t so much as show a drop of affection, something’s up.

10. You only find out the facts about someone via interacting. OK and listening and watching. You can have a great attraction, a hell of a lot of stuff in common, but ultimately there can be mitigating circumstances that get in the way of you moving forward into a relationship – think lurking ex, being emotionally unavailable, incompatible, not interested in a relationship etc. But that’s what dating is for – a discovery phase.

11. Don’t try to be the solution to anyone’s problems. It’s not good to peg yourself as someone to help others to get over their exes. You shouldn’t be looking to fill someone else’s shoes or competing. You are better than being an emotional airbag so just don’t go there.

Understanding Why Dating Several People at a Time is Messy & a Sign of Your Emotional Unavailability...
It Started Out So Great - Why Can't He Go Back To Being 'That' Guy?
How to end up being the Other Woman