Dismissing those childhood experiences is akin to dismissing you 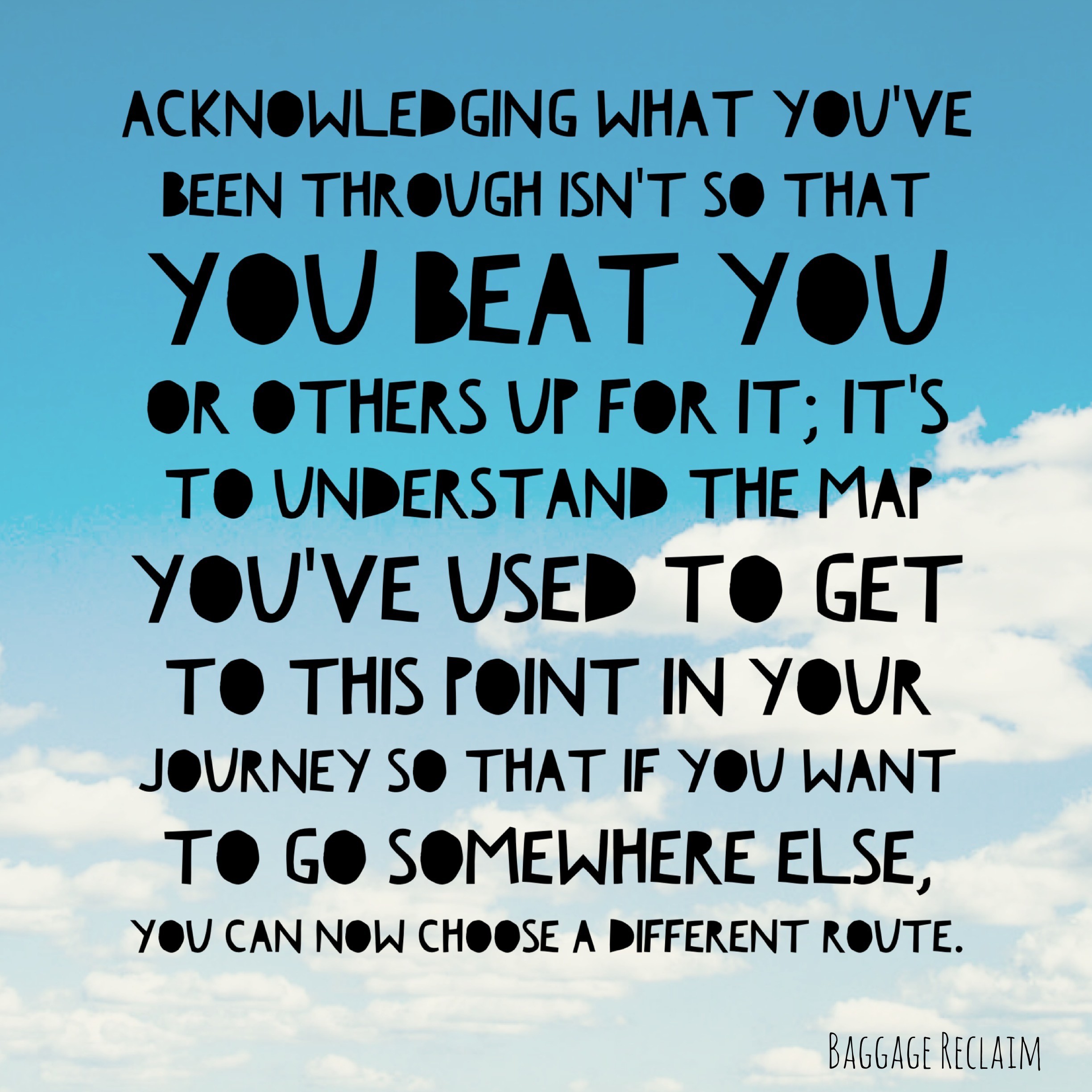 Many Baggage Reclaimers are dealing with people who have an attitude of, “Yeah, I beat you, cussed you down, ignored you, tormented you, abandoned you, abused your parent or siblings, breached your boundaries and all sorts of malarkey, but we’re family. Blood is thicker than water. Why aren’t you carrying on as if we’re best friends / giving me your money / licking my feet / telling everybody how great I am?” And here’s a good one, “Well your friend Bessy’s mother used to beat her and call her names and they’re very close. Why can’t you be like that?” What the what now?

I’m all for forgiveness and moving on but, come on now! It’s not about bearing grudges and holding stuff over people, and I think it’s safe to say that things were very, how shall we put this – “different” back in the day. I was brought up in Ireland plus I have the Afro/Caribbean culture and there was so much turning a blind eye and ‘rules’ about what so-called ‘elders’ (the grown-ups) were allowed to do that hell, everyone might as well have been blind! I’ve often wondered, Erm, when do I get to be a grown-up with rights? When you all kick the bucket? When I’m 99? I don’t feckin think so!

I really feel for the many people I hear from who spent most of their childhoods not having a voice and feeling scared, who are now adults who are still trying to figure out who they are and where they fit into this world. Some of them still don’t have a voice (or don’t believe that they’re allowed to) and are still scared.

These experiences that are dismissed as being part of being in a family deeply impacts people, affecting their interpersonal relationships, their self-image, their assertiveness skills, and their habits of thinking and behaviour. It can have lifelong impacts because the way in which we judge ourselves as children becomes our reasoning habit that we keep using into adulthood until we become more conscious, aware, and present.

The problem with being dismissive of childhood experiences that have left their mark on us, is that we can be left with the wrong associations and actually not be fully aware of how they’re weaving their way into our interactions. We may find ourselves unwittingly gravitating to partners/people who reflect old patterns from our childhood and feeling bewildered as to why we feel so triggered, so scared, so small, and wondering why we find it so hard to say, Um, hold up a frickin second here! Your treatment of me doesn’t feel right. I don’t like it. This is wrong.

Because we’re still mixing up those associations where we were told that certain things were happening because we were loved or that they wouldn’t have been done ‘If only…’. No wonder it’s so easy to blame ourselves or to feel confused in bound loyalty. To acknowledge that certain things that have been happening are wrong or certainly not right for us, causes us to feel in a bind, because to step away from those patterns is to cause us to feel disloyal to the original people connected to those patterns.

I hear from so many people who are in abusive relationships that mirror aspects of their own upbringing whether it was being abused or witnessing abuse. They feel conflicted about exiting from these relationships because they love their parents (and there’s nothing wrong with that incidentally) but to acknowledge that their current relationship is unhealthy is seen as being disloyal to their parents, especially because the whole family is often colluding in whitewashing or even flat out denying the past. They don’t want to acknowledge the pain of what they’ve experienced / witnessed because to do so, is to allow the long buried pain to surface and it means acknowledging the contribution of those experiences to the current perception of their self-worth and how relationships ‘work’. It means acknowledging that there may be aspects of them that are angry. The trouble with remaining loyal to a pattern that isn’t working though, is that it keeps us stuck and that can prove to be dangerous.

To acknowledge the road we’ve travelled in our journey is not about looking to blame our parents (or anyone else for that matter); it’s about recognising the things that influenced who we are and what we’re doing today.

It helps us to understand our motivations for what we’re doing because until we do, we’re doing things for reasons that we’re not aware of while believing that we’re doing them for different motivations, and this is why we end up feeling conflicted and in our own Groundhog Day. We not only try to right the wrongs of the past but we hinder our progression in the present because by lacking awareness and compassion for the original thinking behind these habits, we end up self-sabotaging while trying to spare us from what we think is a bigger future pain. We may be trying to fight one or both of our parents corners and not realising that we’re actually giving up our life in the process. It’s not our battle.

No, it’s not fair and it was a bitter flippin’ pill to swallow, but I’m really all the better for having done so because it’s stopped me from unwittingly having excessive expectations plus it’s also stopped me from putting me in a ‘child role’ while making authorities out of these people. I’ve stopped looking for validation and I’ve focused on healing instead, and a lot of that has happened because I stopped withholding self-compassion. I stopped pretending.  It’s forced me to grow up, to figure myself out, and to come up with my own boundaries based on the preferences for how I want to live.

The one thing I won’t tolerate is my experiences being dismissed by me, never mind anyone else. I’m not clutching these experiences like a security blanket, but you know what? These are my experiences and before anybody tells me that I ‘shouldn’t’ have been bothered by certain things that happened, it’s important to remember that if they are that concerned about my perception of them or their part in their story, they either could have acted better or could be endeavouring to evolve the relationship with me now. I spent a significant part of my life being The Good Girl Who Doesn’t Make People Feel Bad By Remembering. Guess where that got me? I lost me and I got badly hurt. There’s chunks of my life that are so hazy because of the deep stress of trying to forget the more painful parts.

Don’t allow anybody to attempt to do a memory wipe on you just because you remembering doesn’t suit their ego. The irony is is that we’d all find it a hell of a lot easier to move on from stuff if the people in question didn’t keep reminding us of the fact that they behaved in these ways by either repeating the same actions or by trying to make us feel guilty so that we will do what they want.

If you’re acting unconsciously and doing stuff that feels like ‘home’, the clues to why lie in your past. To leave it unexamined is to block you from invaluable insights and awareness.

Your goal in allowing you to remember and acknowledge what you’ve been through isn’t to beat you or others up with it; it’s to understand the map you’ve used to get to this point in your journey so that if you want to go somewhere else, you can now choose a different route by healing you with self-awareness, self-compassion and self-care. To dismiss experiences for which you still have an emotional charge is to dismiss parts of you that are crying out to be acknowledged and healed. You dismiss your soul. You are worthy of serious consideration. You matter.

Podcast Ep. 57: Why Did We Break Up?--Save You, Save Me
Myth: There Are No Good Men to Date (The one where we talk about the diminishing pool of older guys)...
Letting Go of a Relationship That Doesn't Exist
Share this...