Do You Have a One False Move (& It’s All Your Fault) Mentality? 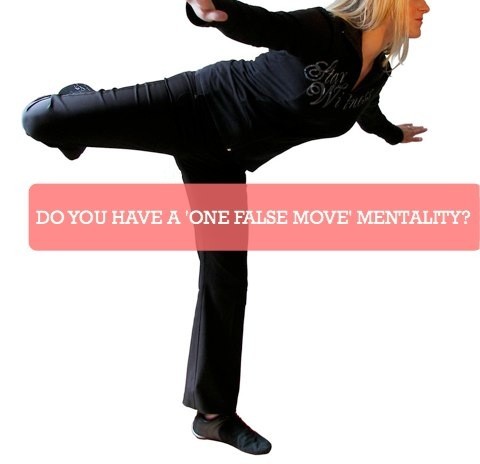 Like most children, when I got into trouble as a child or I thought that I’d ‘influenced’ something, I would take the blame. Sometimes this happened outwardly such as expressing remorse for jumping between two walls and falling between the two and then saying someone else knocked me off because I was scared of getting into trouble, and then a lot of the time it was inwardly, and so blaming myself for events that in retrospect have got nothing to do with me, such as my parents not being together, or my father flaking on us for visits, or my mother seeming angry all the time, or even for ‘everyone’ not being happy.

I think, OK I know, that I was supposed to mature out of this and get a better perspective about responsibility and where I fit into the picture of Other People’s Behaviour or external factors and situations, but the truth is, to some extent I kept up this line of thinking until I was 28 when it was pointed out to me that it was pretty outrageous for me to still be thinking, albeit unconsciously, that a three year old was responsible for her parents not being together. I had a One False Move & It’s All My Fault Mentality and every day I come across people who insist on taking the blame for Other People’s Behaviour and entire situations, when what they should be doing is a mix of being realistic and looking beyond their own perspective as well as where appropriate, taking responsibility for their own actions.

The One False Move Mentality is when you have an inclination to make things that aren’t about you about you and you work off this idea that if you hadn’t done this or you hadn’t been that, or you’d said this or that, or you’d just been a ‘worthy’ ‘enough’ person then X wouldn’t have happened – X is the other person’s behaviour or a situation.

That’s why I’ve actually heard from people who genuinely believe that if they’d answered the phone on three rings instead of seven, or they’d text back quicker, or they’d been more patient and understanding of the fact that the person they’re with was attached/married, or they hadn’t got upset, or they hadn’t been honest, or they had bigger breasts, a smaller nose, were less black, the ‘right’ religion, were better at sex, were always happy, never argued, never had needs, never expressed concerns, kept still while they were having the crap kicked out of them, gave a 50th chance, or had ‘qualities’ that stop someone who is already addicted to drugs/sex/alcohol/gambling to stop being addicted, that they would have a experienced a different outcome.

The question you have to ask when you are blame inclined is, Exactly how powerful do you think you are?

I can say it now that I have the benefit of the 20:20 vision of hindsight but this whole blaming myself for everything is the inverted ego issues I spoke about last year.

Some people have delusions of grandeur and those of us who have low self-esteem have delusions of being grandiosely responsible for Other People’s Behaviour and even for situations that have jack all to do with us.

We see life through a low self-esteem lens and it’s like its mocking us and sending us messages that we’re not good enough and that we shouldn’t bother trying, when really as self-esteem is about the self it’s actually about how we see ourselves.

Life keeps throwing you the same lessons until you heed them. Trust me, if the lesson was supposed to be that you’re at fault for everything and that you’re not good enough, the lessons wouldn’t keep coming.

We also don’t realise that when we run around taking the blame for everything, it’s actually victimising ourselves, agreeing with other people’s dodgy behaviour, opinions or judgements, and giving ourselves the opportunity to make further judgements about ourselves that can have far reaching consequences.

When you want to find a reason to blame yourself, you’ll find a reason no matter how ridiculous it might be in the cold light of day.

Blame is very much about taking other people’s inadequacies and then equating this to you being inadequate as if you’re provoking it. The whole One False Move Mentality gives you this almighty power born of your ‘worth’ that causes a chain reaction of catastrophic events. Then you say “I’m not good enough. This all happened because of me.” Really?

In the Showtime series Homeland, which if you haven’t watched it, is about a CIA agent (Claire Danes) who doesn’t believe a prisoner of war’s story after he returns to America. She in fact believes that he’s been turned by Al Qaeda and she also blames herself for 9/11. Driven by the desire to avoid another terrorist attack, she genuinely believes that if she hadn’t “missed something” that she could have prevented it. Her boss tells her “Everyone missed something that day.”

And this is where you can learn something else about blame and this whole One False Move Mentality – blame is about thinking about, in fact often ruminating over what you feel that you could have prevented if you had acted differently, been different, or said something else. It’s clutching at straws.

The prevention comes when you take responsibility for the thing you can control (you) and you use the insights gained to apply them into your subsequent actions and mentality. Positively.

Living in the past and reliving hurts and rejections because you’re hanging yourself on one false move serves you no purpose, not least because you fail to see the wood for the trees. Yeah, maybe you could have said/done something different, but that would only affect you and in a relationship that wasn’t working for you anyway, it might have meant you wouldn’t have been it in the first place.  People work off their own motivations and agendas and so whatever and whoever they are is based on what they’re already inclined to do.

Blame is like a magic eraser that removes all other parties and absolves them of the blame while you’re at it, taking you out of reality. Responsibility and reality not only paints them back into the picture and let’s you own your own stuff without seeing yourself as being intrinsically linked to them, but it lets you move on instead of remaining stuck on the one thing that really wasn’t the one thing.

Forgive you for where you have erred (you’re only human after all) but also for the things you cannot control and let go of this idea that ‘everything’ rests on you doing the right moves and stop persecuting yourself.

Thoughts?
The Dreamer and the Fantasy Relationship is now available from my bookshop along with with Mr Unavailable and the Fallback Girl. You can also check out my ecourses.

Being Afraid To Feel Angry In Relationships or Post Breakup
Give Yourself The Gift of Self-Compassion: Stop Judging You & The Rejection Will Subside
My Epiphany Moment in Drama Seeking