Don’t build your self-esteem ‘house’ from straw or sticks 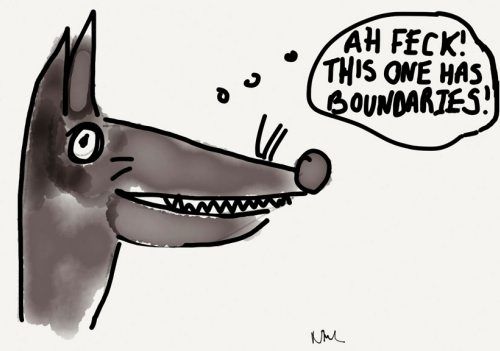 We were reading one of the kids favourite fairy tales a couple of nights ago, The Three Little Pigs, and it occurred to me that the way that the three pigs built their houses – having straw and stick ones blown down first before wising up to bricks – is the way that some of us are with boundaries and our self-esteem.

We might start out doing just enough to eek by (and possibly cutting corners by trying to take shortcuts) and then as we become increasingly aware of our need to treat ourselves with more love, care, trust and respect (probably due to one too many soul sucking experiences), we step it up but might try to hold onto some old habits out of fear of not people pleasing and the perennial fear that, “Hmm, maybe I’m being a bit too tough by having boundaries or not doing what the other person wants, even if it really doesn’t feel good to me?”

It also feels quite difficult initially because as is the case with any change of habits, due to having spent a lot of time on the old habit, it’s a tad unrealistic to expect instant results and so we have to consistently work at the new habit and respond differently to old cues and triggers, and that requires a lot of willpower initially until it becomes more natural.

We secretly question whether ‘all this’ is necessary and still have a secret hope that our happiness lies in someone having to make us the exception to their rule of behaviour, even if that rule is pretty shady or just incompatible with our own core values. We’re afraid of being ourselves because even though it would mean that we’d be living our lives authentically, we still worry that little (or lot) too much about what ‘everyone’ thinks and even compare ourselves unfairly.

But hopefully if we listen to ourselves and learn from the insights that we gain from each experience which are full of positive lessons that can help us to grow, we realise that it’s time to build some self-esteem of more solid stuff (empathy, self-compassion, boundaries, trust, living by your values, healthy beliefs etc), because it helps with our resilience to life’s inevitable bumps plus it actually helps us to feel more secure, confident and able to get on with the business of living our lives authentically by not being ashamed of who we are.

Sometimes when our inner critic is piping up, we can get the impression that maybe we need to go from ‘bricks’ to ‘sticks’ or ‘sticks’ to ‘straw’ because we draw the wrong conclusion that because certain things have happened that it’s about our quality as a person and us being ‘wrong’, when actually, the path to happiness is about increasing our personal security not exacerbating insecurity by stripping down to a barely there existence that leaves us exposed to the elements.

And you know, we’ve gotta be careful of ensuring that our actions match our words because we can make like we’re made of solid stuff when really we’re hiding a wobblier self (like a mock show home without the foundations and proper pipes etc like in the show Arrested Development) which gets revealed as soon as we don’t assert ourselves when our boundaries are crossed or we become driven by the fear of being abandoned.

The great thing about building up your self-esteem is that aside from increasing your happiness, changing your perspective and changing your experiences, if someone decides that they want to have a crack at huffing and puffing at your proverbial house, they’ll get the message that they’re better off jogging on somewhere else and that they can try, but they’ll likely exhaust themselves. They might see you as a challenge and try harder but you’ll be secure enough to think it’s strange, not flattering, that someone’s trying to break you down.

You’ll also find that some people who used to think you were made of ‘straw’ or ‘sticks’ will discover after you’ve possibly used the time away to focus on you, that when they try to engage you, you’re not that person anymore.

Keep building. Remember that there is no destination and life is a journey, so just keep building along the way. Also, you’re worth investing in and ultimately if you treat and regard you with the love, care, trust and respect you deserve, a solid you will be around and with people who want to be solid with you.

Be careful of going on a Regret Binge as it leads to a Regret Hangover
Podcast Ep. 162: Keeping Up With Comparison Part One
Let Your Anxious Younger Self Know That You Have Their Back