Drama Seekers: It’s time to get off the relationship crack 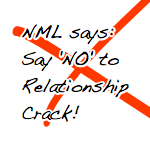 Today is the very first day in the 30 Days of Drama Reduction series.

Lot’s of women believe that drama is part and parcel of relationships. Some are purposeful Drama Seekers, actively pursuing men that cater to the high adrenaline factor, but there are a hell of a lot of women out there that are ‘Accidental’ Drama Seekers.

You just seem to have a lot of drama going on in your relationships.

The average woman that I come across through this blog has a hell of a lot of stuff going on. They’re with married or attached men, they’re cheating on someone, they’re with an alcoholic, an emotional or physical abuser, they keep finding themselves in one night stands, they’re trying to get their Mr Unavailable to stop blowing hot and cold and commit, they’re catching someone out with his lies, and the list is endless. For some readers, all of the issues that I have listed above could be ALL of their problems! That is shocking!

The problem is that many women no longer recognise the many problems that they encounter as drama. Instead it translates to excitement, adrenaline, a signal to pursue and stay emotionally invested, and they make the mistake of believing that they love the man when in fact they love feeling created by him bringing drama to the table.

Drama is now the ONLY thing that many women recognise as a consistent feeling in their relationship, which in turn translates to them as love. As a result, even when you find yourselves with men that aren’t offering drama, you’ll create it.

So what is all of this drama seeking about?

Drama is about seeking and creating negativity even though you may not recognise it as ‘negative’.

You will tend to seek out and create drama in relationships that you’re not convinced that you deserve or can hold onto.

A lot of drama is about getting the other person to change to your ideal – the very common syndrome of Betting on Potential.

Drama is about attention. In many respects, you’re at a point where regardless of whether it is positive or negative attention, attention is attention. You will probably feel like you get far more ‘out’ of him when there is lots of drama going on.

Attention in itself indicates validation. If you only seem to get the most attention from him when the chips are down and the drama meter is up on high, you will create drama to get the attention, hence you both end up learning this as your relationship style.

Many women don’t know how to bring out positive attention hence they ‘act up’. This could have been learnt in childhood where the only time you may have felt like you were taking centre stage is when you had your parent(s) mad at you. Or you may have lived in a high drama household and repeated the pattern.

Drama can often have women believing that they are ‘helpless’ to avoid it, as if it is something that has nothing to do with them. It is often left in the hands of the other party to be the one to bring about change or walk away, hence you often hear women saying “I’ve told him that I don’t want to do this anymore but he just won’t leave me alone”

If drama is not in the offing, many women can talk themselves into it because they LOVE talking. Discussing implies that we are working on our relationship hence we believe that we are the harder working party. However, often, it’s talking for talking’s sake, verbal diarrhoea, or as I prefer to refer to it Women Who Talk Too Much syndrome.

Guys who have a habit of going out with women full of drama tend to like these relationships because they think that there is something wrong with you, which as a result gives them the impression that they have something valuable to add to the relationship. This is particularly interesting as a lot of women look for men to complete them and base their lives around him, hence these types of men actually perpetuate the insecurity.

Even though you may believe that this drama is about him, sometimes you have to admit that if you can’t find drama you’ll make it, because you are insecure and distrusting of when it feels good.

All of this negativity fuels the insecurity that is the mainstay of your relationships and your self-esteem.

Drama works for you. You could say you love Relationship Crack – getting high on the bad stuff and driving yourself crazy…and then going back for more, because even though you know it’s no good for you, you felt more comfortable, loved, showered with attention, and in control of things, when you were on your high.

But remember that like any crack, it takes it toll pretty damn quickly and you will end up being an emotional wreck – not just for this relationship, but for any relationship you walk into because you’ll continue to create the pattern, over and over again, to get the feeling.

So I leave you with today’s ‘thought’.

If you think of your current relationship, or most recent, think of all of the drama and negativity and deduct this from your relationship and ask yourself what you are left with. If there is very little positivity, ask yourself: Why am I here? What has he done for me lately? Are you in negative equity?

Do you have a post or tip to submit for the series? Get in touch! Read other posts from the series.

Slow Your Roll: Why Being Asked For Your Number is an Expression of Interest, Not a Guarantee
Are You Dealing With A 'Chopper'? When Somebody Keeps Trying To Cut You Down
Coping With and Moving On After a Breakup Commandment 2: Thou Shalt Not Obsess