Everybody ‘bounces back’ at different rates 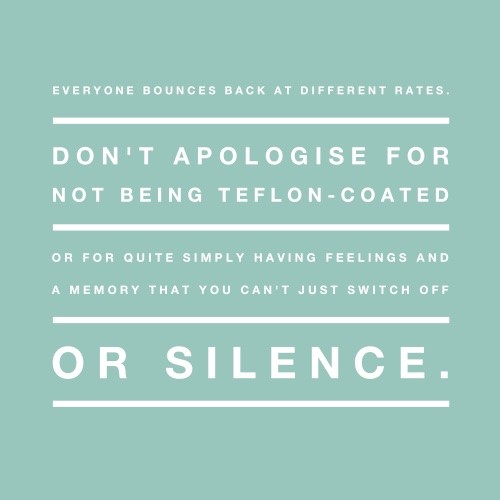 It can feel very bewildering and even pressured when we are wounded by something that has happened but somebody is questioning why we haven’t moved on from it yet, or they’re struggling to fathom our response to whatever happened.

It might be one of those situations where they’ve, for instance, apologised but what they really want is for us to hurry the hell up and move on so that they can delete the issue from their memory bank. In situations like this, especially if you’re inclined to be a pleaser or certainly inclined to invalidate your own feelings and perspective, you may put you under pressure to move on and forget. You may feel that you’re being ‘too slow’.

In reality, we don’t all ‘bounce back’ from conflict, criticism, rejection, loss and disappointment at the same rate. Hell, some of us don’t ‘bounce’ at all and it can be a painful process to navigate the myriad of emotions and thoughts that we may be contending with in the aftermath of something happening.

Each person’s pace is their own.

We are all unique and no matter what we believe that we may share in common with a person, there are very specific individual and personal reasons that influence our recovery.

Ten people could all be in a room when they all experience something traumatic but they will all respond – so they will think, feel, act and ultimately recover – differently.

Our ‘bounceback rate’ as such is influenced by factors including:

Whether we tend to bury, run from, hoard or deal with our feelings. Are we living in the past, on the run, bashing ourselves with the feelings and reliving the pain over and over again, or allowing ourselves to feel and move on from a feeling without judging or censoring it?

The depth of how much we feel. The more we suppress and repress is actually the more we manifest the pain in other ways. It leaks out and shows up somewhere in our day to day experiences. Yes we’ll feel it intensely when we allow ourselves to feel all of our feelings but that helps in the grieving process. It’s important to note though that people who avoid their feelings or who anaesthetise them with people, things or even substances, can appear to ‘bounce back’ but are delaying and in effect stockpiling their pain. That’s why we shouldn’t feel so envious when a person for example, flits from relationship to relationship with their feet barely touching the ground as they exit one bed to another.

Our past experiences. If we’ve experienced similar before then we’re either going to be better equipped to handle whatever has happened or we’re going to feel as if whatever has happened has compounded the previous experiences. Part of what can affect our recovery is whether an experience activates old wounds – we may be transported back to being a certain age. It might open the floodgates for a loss that we either thought we’d dealt with or thought we’d manage to bury.

Prior experiences with the person in question. This might be the straw that broke the donkey’s back or it may feel as if we’ve been blindsided. Or we may feel that we can trust them and move past it together.

Our reasoning habits. Taking into account our previous experiences, whatever our typical belief response has been when we’ve experienced conflict, criticism, loss etc, has a great deal of influence over how we respond.

How invested we were in a predicted outcome. If we had it all mapped out in our mind, we’re likely to experience an imagination hangover as all of that plotting didn’t leave much room for the eventuality of uncontrollable factors. We may have got too caught up in the picture we painted in our mind.

Whether we’re stuck on entitlement. Sometimes we inadvertently get stuck on where we feel robbed over a predicted outcome because we feel that we met all of the conditions that we thought would yield a certain outcome and yet it wasn’t so. Sometimes part of the reason why it’s hard to regain our mojo as such is that if we’ve not typically felt that happy with ourselves and we’ve spent a lot of energy trying to please others and be “enough” or “perfect”, it can feel like a real kick in the teeth when it feels as if we’ve practically broken our backs and spontaneously combusted into a doormat willing to meet every need and desire and yet despite us ‘meeting the conditions’, we’re still not happy or it hasn’t worked out.

How much self-compassion, if any, we have. Quite simply, the kinder we are to ourselves, the better our recovery. We have to be consciously kind though and that means interrupting negative self-talk and intervening when we engage in destructive or at the very least unhelpful behaviour and thinking.

Whether perspective is involved. If we experience something on day 0 and on day 365, we have exactly the same perspective or even worse on it, it’s safe to say that our recovery will be slow and eventually regret will kick in. Day 0’s outlook represents our understanding at that time and growth comes with perspective. We have to be willing to change the narrative especially if it’s very harsh on us and keeping us stuck in a cycle of blame, shame, guilt and fear. Perspective is also influenced by whether we discuss what happened with someone we trust and/or professionals, whether we judge whatever has happened as a permanent statement of our future, and in fact, how many judgements we make about us and life.

As a rule of thumb, it’s safe to say that if someone does you wrong, they don’t get to dictate the speed at which you recover from it. If anything, riding your arse like Zorro to harangue you into moving on, is only compounding whatever has caused the hurt in the first place.

It’s not about bearing grudges – quite the opposite. You have a right to give you a chance to feel your feelings and to air your thoughts on something. It’s like, “Can I have a frickin moment to just be?” It’s not about wanting to hold onto something; it’s about recognising your uniqueness including your vulnerabilities. It’s about giving you a chance to understand why you have responded as you have including why something has hurt in the way that it has, so that you can grow your awareness, take care of you and learn from the insights gained.

That’s not about taking ownership of their behaviour but it is about recognising that recovering and yes, ‘bouncing back’ from something does have a great deal to do with your relationship with you.

It’s all very well kissing and making up with somebody but then if you privately feel contempt for you for having made up or you feel as if you’re slowly dying inside because you’re denying your hurt ‘yet again’, that’s further damaging your relationship with you.

As humans many of us are inclined to want to bounce back and move on as quickly as possible. We want to speed through the ‘bad parts’, the ‘bad feelings’ but we need to respect the process because we learn a great deal from these and we get stronger too.

Everyone bounces back at different rates. Don’t apologise for not being Teflon-coated or for not having the tenacity of a cockroach after a nuclear bomb. The more you keep prodding at you about when you think you ‘should’ be over something is actually the harder it is.
I’m not suggesting that we all dine out on feeling bad and string it out for as long as possible but it’s about time more of us acknowledged that there are very specific experiences that have contributed to who we are today and why we respond to certain things as we do. When we bring awareness into the equation, we can actually have a far greater hand in helping ourselves to feel better and the knock on effect is that we will recover better each time from life’s inevitable knocks.

Be kind to you.

Podcast Ep. 248: Keeping It Real About Self-Esteem
Self-esteem in a nutshell - When you believe you're not good enough to drive your own life
Knowing the line between putting you first and being "selfish"