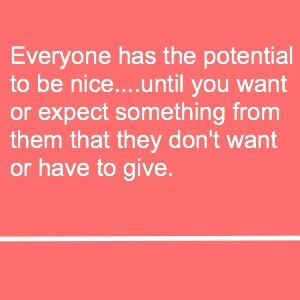 Many BR readers are venturing back out there and dating again, and of course, if you’ve had your hands burnt in an unavailable relationship or have even encountered behaviour and situations which left you shaken or questioning whether you can trust yourself, you’ll be ‘on guard’ for anything shady while at the same time latching onto ‘nice’ signals. One of the things that readers remark about is how someone that they’ve just met/reconnected with, or been on a few dates with, is ‘potentially’ a nice person. If they go on to do something that doesn’t fit with your vision of nice, it can send some of you into a tailspin or have you questioning your judgement.

Most people put on their best drawers, are charming, funny, accommodating, and may even seem like you have a lot in common. In essence, we showboat our best Let Me Impress You Selves because we want to be liked. OK that and we may hope to get another date and on the shadier side of things, we may have our eye on getting a shag, an ego stroke, and a shoulder to lean on. These things are difficult to come by without behaving halfway decent *initially*…unless the other person ignores unhealthy behaviour.

It’s only the most deluded who don’t actually recognise that certain types of behaviour and characteristics are not actually attractive or healthy, or the ones that are shady and looking for a quick hit, that will show you their arse (figuratively, OK and possibly literally) very quickly.

If you’ve ever interviewed someone for a job, unless you’re letting people walk in off the street, you have a pre-screening process where you work off first impressions based on certain information gathered through a telephone interview, a CV/resume, application form, or letter. It could end up being that none of the people you select to go forward are ultimately right for the ‘role’ but what you do is based on what is presented, candidates where it’s immediately obvious that they’re not the right fit are removed.

Now there’s every possibility that a portion of these ‘candidates’ were misguidedly overlooked but bearing in mind that you can only work off the initial information that was given by them and your own judgement, you have to let this be. You can’t miss what you never had. Obviously you could decide to call them back up or ‘give them a chance’ but that may not change what you originally gauged.

If you recognise that most people are ‘potentially’ nice, you can relax, go through the discovery phase of dating, and let the situation unfold.

If an employer had one job and tried to hire all the applicants irrespective of their aptitude for the role, that would be pretty effed up.

Stop latching onto a few arbitrary things displayed or conveyed in early conversations or dates, thinking ‘Bingo! They’re a nice person’ (whatever nice means) and immediately assuming all sorts of things about them and then feeling like you judged them wrong if they stray from your vision.

Let’s be real – Even if you have really great judgement, you cannot immediately know what someone will or will not be, hence why saying you’ve fallen in love at first sight, is like saying you fell in love with an illusion and air. It’s giving yourself too much credit for your powers of judgement. Yeah you can often smell a rat from a mile off, but some people are actually pretty decent folk with relationship habits that rule them out of a relationship with you.

I assume most people are decent until shown otherwise and then adjust accordingly. I don’t feel disappointed if they turn out not to be ‘nice’, because instead of starting out by building them into something off a few ‘nice signals’ which is basically Betting On Potential and blowing smoke up a strangers bum, I start from scratch and let the person ‘build up’ through the discovery phase – this is when you’re getting to know someone.

If you don’t like what you know, you bounce. Case closed.

Many people are going out there with a pre-constructed vision of ‘nice’ and then based on what appear to be subsequent ‘nice signals’, inflating the vision further, and then feeling disappointed. The danger is that if you’re the type to latch onto things and make a big deal out of them and then assume the person is automatically in possession of *other* qualities and characteristics that you deem attractive (people constantly do this with common interests, appearance, intelligence, sex, chemistry etc), you’re not in reality about who you get involved with.

Dating is a discovery phase. As you get to know them, if you’re in reality, you gradually build up a picture of who they are instead of leaping ahead and assuming who they are and having to reorganise your vision.

In this way, any picture that you have of someone is consistent with what you actually know and in context. This means, yes you may have thought they were great from day 1-20 but if on day 21 they do something that completely contradicts what you felt you knew and/or it’s code amber or red territory, you can say “It’s a shame as I’d thought they were whatever and whatever but hey, we’ve only known each other for 3 weeks/been on a few dates. It’s good that I see this now” – remember you can judge a situation without having to judge them.

When you spend time around someone over a consistent period of time in a range of situations, then you discover. I remember a reader being shocked at how disrespectful her partner was when they were out. I was like “You only discovered this after seven months?” She said “We spent most of the time in bed or in our apartment for the first six months…”

I’m not saying that they’re not nice, but going on a date or two or even seven isn’t all there is to discover about a person. Hell you’re always discovering (just at a slower pace as the relationship progresses) but there comes a point where you can rely on what you’ve discovered to be a predictor of what is to come – this is only something that comes with time…and of course reality. You can’t hurry this.

Forget About Being Unlucky In Love - You Can Make Your Own Luck
Myth: There Are No Good Men to Date (The one where we talk about the diminishing pool of older guys)...
Lovenomics: Managing Your Desire to Be the Exception in Relationships Part Two