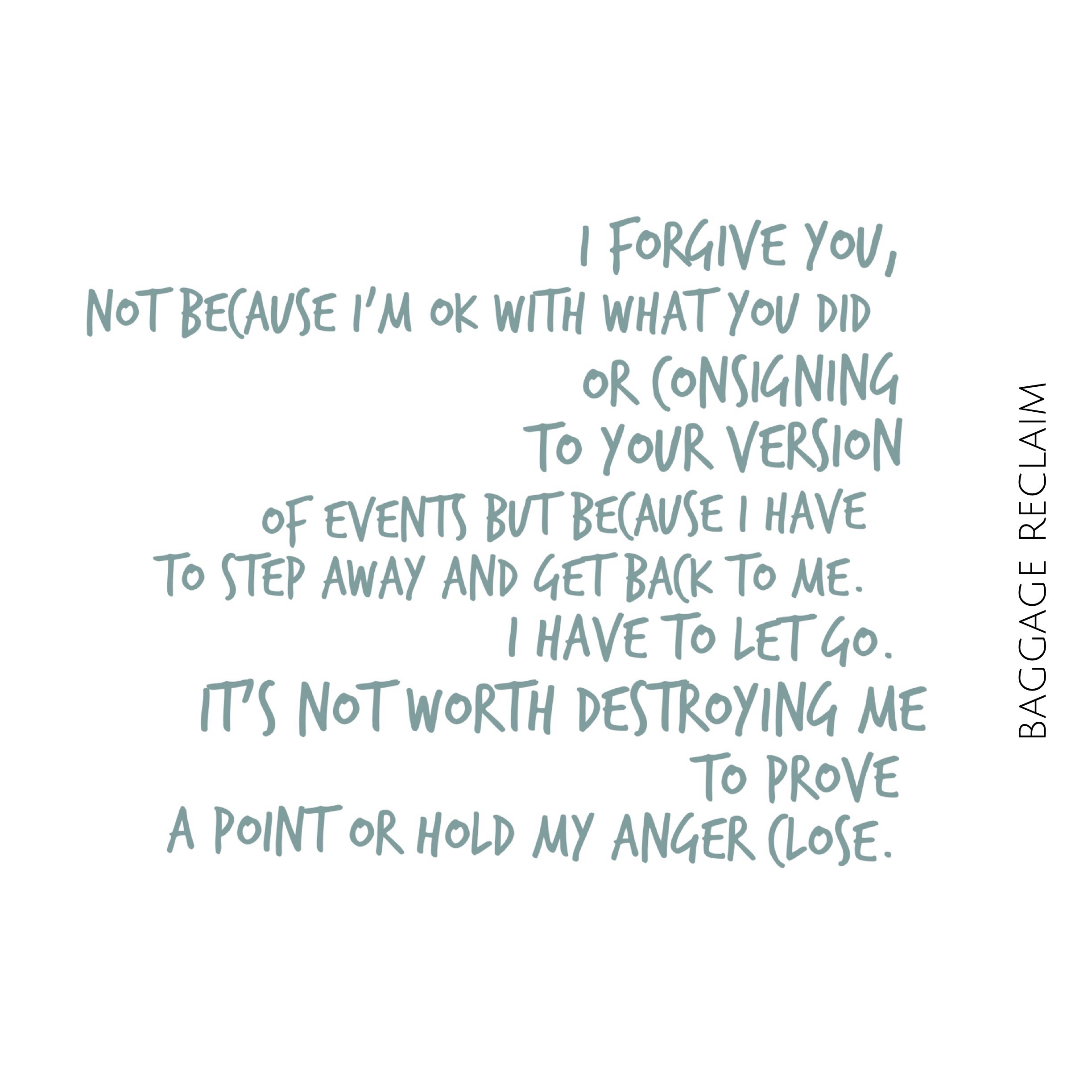 As I continue making peace with my past and recognising younger parts of me that still hurt and remember, I am committed to being self-compassionate and learning from when I’m not. I’m also committed to not letting my past and those in it, rob me of my present and my peace. I’m in command of me now, and I can’t give away my chance at life and my journey because it didn’t start out as I would have liked and the pain. In the end, much as I could hold certain things front and centre in my heart and mind, and even try to make, for instance, my parents ‘make up’ for everything, it’s me who will feel my commitment to the past and the pain the most.

Forgiveness doesn’t mean that you’re saying that the other person is “right” or that what they did is/was “OK”. Forgiveness is about choosing (and re-choosing) to let go so that you don’t get stuck living in the past.

You forgive, not to anoint the other party with something but to release you to move on and evolve beyond it.

Big blocks around forgiveness are fear of condoning, that we’re giving them or the universe the blueprints to screw us over, or that we look “weak”. We also fear being vulnerable by putting ourselves out there again and putting ourselves back together. It’s like, What if I forgive and then I try again at life and get screwed over? What if they think that they’ve gotten away with it?

It’s about getting into the present because when you’re actively or passively holding on, you’re not letting go. You might be trying to right the wrongs of the past in some way. Or, maybe you’re ‘dining’ what may be every single day on the anger and other emotions. You may keep rubbing your face in where you feel that you’ve erred. Or you might rub your face in the other person’s behaviour while blaming you for it too.

It’s about deciding to be done.

Part of our reluctance to let go and forgive is about our relationship with ourselves. Not the outer one that we project but the inner one driven by our thought and feelings ‘conversations’. It’s what goes on behind closed doors.

Many of us are attached to the narrative, to the ‘reasoning habits’ (beliefs). It often feels easier to keep telling the stories while berating us in the process. Or to almost feel righteous about how wrong the other person is. We forget that we’re not fully occupying our actual lives. The story of our lives continue but are, until we decide to let go, becoming a story about us telling a story.

If you’ve struggled with deciding to be done, where are you judging you in some way?

Are you reluctant to let go of the security blanket of the story and your position? You might feel righteous or consumed by the injustice of it all.

Where are you reluctant to trust you and move on?

Where are you holding onto a ‘child role’ and avoiding responsibility?

Something really pissed me off a few weeks back — bloody family smoking too much It’s December Crack. It brought up some old stuff for me that caught me off guard. Note: we can fall into the trap of not acknowledging the usefulness of discovering that we can be triggered by something. They’re opportunities to take the sting out of past (and present) events so that we can reframe the story and move forward.

Anyway, I saw my kinesiologist the following day. She was so empathetic and supportive but also said, “Take responsibility”. I knew immediately what she meant: not taking responsibility for other people’s behaviour or even their feelings but taking responsibility for how I was feeling and what part I was playing in that. In my anger, which I had every right to feel, my inner critic and ego took over, and without realising it, I was giving me a hard time for being “too nice”. In my criticism of the person and raking over events in my mind, I’d fallen into self-criticism.

Remember, we don’t deserve to, for instance, be mistreated or for something that we dislike to happen. However, just because we’ve been mistreated or something unwanted happened, we don’t need to search out a reason for us to deserve it. It happened. We are not Jedis or master puppeteers!

If you don’t, not just let go, but also acknowledge where that experience has influenced your thinking and attitude towards you, life and any parties involved, you will not be self-aware about any reasoning and subsequent judgements.

You won’t recognise where you’re trying to essentially prove and re-prove negative ‘teachings’ from the experience. There will be a hardening-up, and you won’t notice where you lack self-compassion.

The ‘cost’ of forgiving, as in choosing to let go and stepping away from making it the main storyline or the underlying theme in your life, is far less than not doing so.When we choose and keep re-choosing to let go, we release ourselves from self-persecution.

We release ourselves from regret that we can’t turn back time that is already moving on. There’s no more trying to right the wrongs of the past with the person involved or similar. We’re liberated from the need to know that they have suffered sufficiently under our watch (or via confirmation from others). There’s no more waiting for the perfect conditions to give ourselves permission to move on and stop obsessing. Bye-bye to trying to influence and control the other person’s thinking and behaviour with our pleasing/lack of forgiveness.

Not letting go has a very high emotional cost which can and will affect the emotional, mental, spiritual, social and even financial areas of our life.

Forgiveness, so deciding to let go, is a commitment. You make it without knowing exactly what’s going to happen in the future but choose to do it anyway. It’s consciously deciding where you are going to invest your energies. You don’t need to, for instance, know that the person will come slinking back or that they will experience karma. Nor do you need to know that your life will be without a hitch or a glitch. You just need to know that you’re ready to be done and to step into your future.

Do you have a Replacement Mentality?
After The Breakup: Hold Tight To Your Self-Respect and Stop Trying To Be Friends With The Ex That Mi...
Advice: How do I say goodbye without the anger and pressure in my interracial relationship?
Share this...