Getting Closure On Closure: We Cannot Always Get ALL Of The Answers 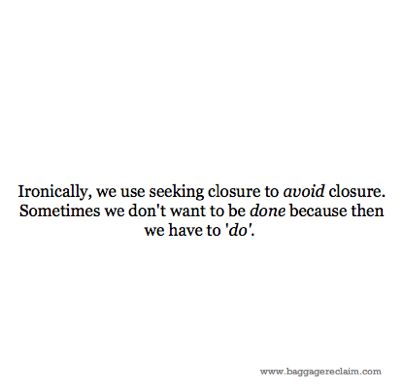 The trouble is, that if you imagine the day you broke up as the end of the relationship and then you don’t go through the grieving process and work through your feelings and process what happened, and instead you choose to keep engaging with them, breaking up and getting back together, trying to get their attention and validation, doing things to stem the perceived rejection that you later come to view as at best embarrassing, and other such things, it’s like you’ve got the meter running. At some point you’ve got to know when to exit from this closure quest and turn the meter off before you overinvest in it.

Closure becomes increasingly hard the more stuff you pile onto it to leave you feeling like there are so many unanswered questions.

The chief source of closure issues is blame, most likely to be of the self-blame variety that stems from having an ‘overactive blame thyroid’. If you keep making everything about you and essentially holding you responsible for Other People’s Behaviour, then yeah, you’re going to have closure issues because by not only taking away their responsibility and effectively erasing them out of the picture by making what happened all about you and your ‘flaws’ or ‘eff ups’, how can you reach a resolution? You’ll think, “Oh if only I hadn’t been X or I hadn’t done Y, then they would have done Z or A wouldn’t have happened”.

Who moves on when they’re stuck in their own self-imposed prison living out a sentence they’ve determined from a distorted perspective?

And here’s the interesting thing that I pointed out to someone yesterday: We can’t have it both ways. We can’t be a relationship hogger blaming ourselves as if it all went tits up based on our ‘one false move’ and then in the same breath after putting it all on us, claim that we need the other person for closure. So let me get this right: You don’t need them to be accountable and responsible in the relationship and own their own? You don’t need, even if it’s purely a mental thing, for you to separate the two of you out and see things in reality and recognise their own contribution, but you do need them to step up and give you closure for something that you won’t even give them their own stake in?

That just doesn’t even make sense.

What we don’t realise is that many of us use this idea of seeking closure as a means of avoiding using our own judgement and engaging in decision-making, and to avoid this perennial fear of ‘making a mistake’.

Closure then becomes looking to be at least 100% certain that it wasn’t your fault, or that you did everything that you could do (which may include taking the blame and the responsibility for the other person’s contribution) and that the relationship is unworkable and that they’re not going to change into a better person in a better relationship as soon as your back is turned. Of course if you actually want to move on, you’ll do so before ‘100%’ especially as it’s subjective. You’ve got to know when to close the investigation. I know people who walk away and move on after being treated in a less-than manner and I know people who walk away and thenblame themselves and get a Ph.D in ruminating on another person and blame absorbing. The difference? The former doesn’t see themselves as a manifestation of other people’s behaviour. They own their own and let others own theirs for the sake of their emotional peace.

Ironically, we also use seeking closure to avoid closure.

We don’t want it to be resolved because then we have to let it go and work through the grief and move on. We have to take action, address any of our own issues and basically, we have to let go of a security blanket that may have become our purpose.

We cannot always get all of the answers especially when those answers are being sought from people who don’t want to give them, who talk out of their bums and are avoiding as much honesty in their own lives as possible, or who aren’t around anymore.
We cannot always get all of the answers. It’s unrealistic. I’ve seen very bad things happen to very lovely people. They were devastated and no of course it all didn’t make sense but gradually between grief, and looking inwardly (if needed) along with supporting themselves and sometimes professional support, life and who they were started to make sense again in a positive way, even if this person or this event didn’t make sense in the fullest sense. Hell I’ve seen people go through a whole court case and come out with more questions than they had when they started.
You were not the only person in this relationship. Yes it would be handy if they’d come back and be debriefed for 24 hours in a holding cell but that’s not going to happen and how about you debrief you?
Experiencing a loss (and yes that includes breakups because it’s the loss of your hopes and expectations that were tied up in the relationship), a betrayal or just something that’s very painful, takes time to work through but feeling all of your feelings and processing what happened is actually an opportunity to get to know you further and gain self-awareness in a positive way. Knowing you better helps you to make better decisions and to also live your life more authentically and in turn, pain can turn into growth because you are able to find that sense of resolution within you.
Your thoughts?

Shedding Tears for an Assclown
What’s Your Hook? Understanding What Will Stop You From Letting Go Of a Relationship…Or Draw You To ...
Stop letting fear of uncertainty hijack your happiness