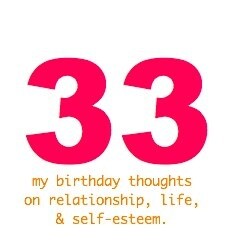 I’m taking a brief break from my current series on dating reflections of our parents and as it’s my 33rd birthday today, I’ve put together 33 thoughts on relationships, self-esteem and life. Enjoy!

1. Live with self-esteem at the heart of your interactions because if you don’t like and love you, you’ll act without love, care, trust, and respect towards yourself and engage with people and in situations that detract from you.

2. While it’s very ‘flattering’ when someone says that you’re ‘the one’ or they want to have babies or get married when you’ve just met or been on a few dates, you just don’t know each other enough for this to be sincere. Assclowns in particular are like dodgy estate agents – they rush you through the ‘relationship house’ at a whirlwind pace because they don’t want you to look too closely and are bamboozling you – they know if you were paying attention instead of being whisked along that you’d smell a rat.

3. Relationships are not a 50/50 partnership – they’re 100/100 because if you do anything less, not only will you not be authentic but you’ll be thinking about things in terms of your ‘share’ and your cut and anything less than full effort is subjective.

4. People who have an ounce of respect for you won’t keep trying to bust your boundaries or find ways to sneak under your personal electric fence.

5. There are lots of good people to date but if your frequency is set to emotionally unavailable people or assclowns and you haven’t learned to recognise and filter out inappropriate behaviour, these are the type of people you will see and vibrate with.

6. It’s great that you’re intelligent and smart but it’s not the same as being relationship smart nor does it afford you special treatment.

7. Don’t give your libido, perceived chemistry, attraction and common interests too much credit by correlating them to the rest of a person and assuming that they possess the same values as you – they might not.

8. Dating is a discovery phase – You need to go into dating with a reasonable level of trust and by paying attention to actions and words, you can roll back or increase your trust accordingly. Don’t be gaga and run around loving and trusting blindly because you will be ignoring evidence that indicates that you need to slow down or abort the mission.

9. People show you and tell you who they are and you need to be listening and watching, not deciding that you know better.

10. Avoid playing games in relationships because not only will you become uncertain as to what is genuine and what has been manipulated by the games, but you will lose all credibility with the other person if they become aware of it, plus if they’re dodgy they’ll take advantage of it.

11. If you imagine that hanging on to people and relationships that are unhealthy is like taking a big gamble or investing in a dodgy investment fund, at some point you need to know when to cut your losses before you end up in ‘financial’ ruin.

12. Be empathetic and understand someone else’s position but don’t be so sympathetic that you pity them, take on their problems, and attempt to fix/heal/help them inadvertently removing their power and responsibility and getting yourself lost along the way.

13. When someone is happy as they are but you try to get them to change to make you happier, you’re disrespecting them as a person instead of accepting them as they are and deciding if you can work with the ‘real’ them.

14. Staying and complaining doesn’t remove your accountability or do anything to improve the situation.

15. Change is scary for most of us to do but that doesn’t mean we shouldn’t do it and we often find that it’s not as scary as we thought but more rewarding.

16. If you don’t believe that it gets better than this, it will reflect in your actions and it is important to understand what it is that you believe so that you can recognise where you may be limiting yourself and undermining your own chances of relationship success.

17. Stay away from people that rely on creating their own little space time continuum giving themselves the liberty of a fresh start and a selective memory with The Reset Button.

18. Be careful of Relationship Amnesia and Relationship Stockholm Syndrome because this is how you keep finding yourself back with someone who is no good for you.

19. Resisting the reality of something takes a lot more energy than accepting it – don’t give room to denial in your life.

20. Don’t just focus on the ‘good points’, the ‘good parts’ or the ‘good times’ – make sure you see the person or the relationship as a whole which will keep you in reality.

21. If you have to sell someone the concept of being interested in you never mind being in a relationship with you and effectively have to drag the horse to water and force it to drink, don’t go there as you will devalue yourself and quite frankly, you deserve better.

23. It doesn’t matter if you have twenty shared interests because if you don’t have shared primary values, your relationship will not work. Values are pivotal to being personally happy and being happy in relationships.

24. Often when we think people have power over us, it’s power that we’re giving away so stop giving away your power.

25. There are ‘normal’ ‘traditional’ breakups where the person respects your wishes, doesn’t bust up your boundaries and try to shag you, get an ego stroke, take your money etc but the No Contact Rule is for the ‘other people’ where normal rules don’t apply because they do things on their terms.

26. Desperation in any form mixed with dating and relationships makes a dangerous cocktail that can be smelt by assclown sharks a mile away.

27. People who are genuinely interested in you not only show their interest but they don’t resist you and they don’t make their intentions or interactions ambiguous, plus you know they’re interested without second guessing.

28. Any relationship where one person seems to think it can only be on their terms is a relationship to run in the opposite direction from.

29. Seriously there’s nothing wrong with your phone or internet connection, he’s ,not lying on the side of the road injured, an emergency hasn’t come up or any of the other excuses you’re dreaming up to make contact.

30. From the moment someone is saying that they want out or they’re not interested, this is a red flag signal that you need to be stepping back and losing your own interest.

31. When you feel rejected by someone it’s important to work your way through it otherwise you will get trapped in your feelings and seek attention from the source of your pain as it’s a temporary fix that will set you back.

32. If you’re with a person that requires if’s, but’s, maybes, except’s and closing your eyes and imagining them as you thought they were or how you’d like them to be, it’s a sign that in reality, your relationship isn’t up to much and you need to get into reality.

33. We don’t live in an ideal, fairy tale world so while its great that you know what you would think, feel, and do under various circumstances, don’t project this on to other people and assume they are the same unless you have evidence that demonstrates this.

He broke up with me: Is he an assclown?
Dating Doesn't Equal Relationship! It's a Discovery Phase Not a Relationship Guarantee
Sometimes we forgive prematurely and then feel bad that we're not able to let go of the situation