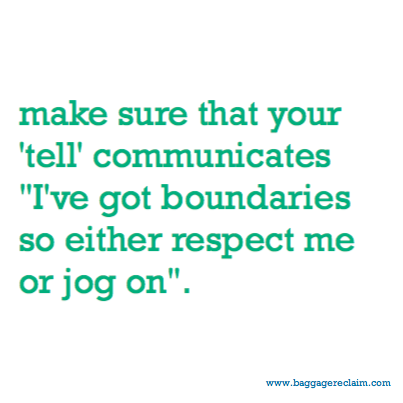 When we have low self-esteem and/or we are not being ourselves and even going so far as to misrepresent ourselves, we actually have ‘tells’, unconscious actions that are perceived to ‘betray’ an attempted deception or what we’re trying to put across about ourselves. We can find ourselves saying, doing and agreeing to things because we think “I can handle it!” or “I want to give the impression that I’m ________” or we don’t want to give off any vibes that may scare them off or bugger up the ‘relationship deal’. We overestimate our capacity for a relationship, we overestimate our interest and yes, sometimes we overestimate our readiness to date and how over our ex we are and yes, sometimes we exaggerate. Let’s be real – some people just talk out of their bottoms.

Like Chris Rock said, when we first start dating someone, it’s not the real us that we’re sending out but our “representatives”. I’ve said this many times and I’ll say it again; people unfold. Unless you’re dealing with a skilled con artist, most people including the personality disordered have “tells” that if you’ll heed the feedback, you’ll be able to get a more realistic picture of who and what you’re dealing with.

I’ve had so many readers left perplexed by the question of why somebody felt that they could be or do something around them. The question of what was it about you that gave the impression that you’d tolerate something can keep you awake at night. “Why me?” or “Why him/her and not me?”

An ex colleague actually told me that he didn’t talk to me about career opportunities (that didn’t exist anyway and were a ruse to get ‘dates’) because I wasn’t “agreeable” enough. That was my ‘tell’ which prevented him from chatting all the BS to me that he had to so many other women in our office.

If you’re wondering why someone did something when you feel that at that point they wouldn’t have had the security of knowing how you’d respond, it’s highly likely to be because they were chancing their arm which means that they take the risk, not because they’ve assessed the situation and got a cue from you but more because they’re taking a chance and if they get the desired result, happy days and if they don’t, they’ll go to plan B. Or split. It’s like asking you for £100 when you hardly know them. Hopefully you say NO, but you might give it to them, or say “Yes, but I can only manage £50”. The risk has paid off but by giving them the money, however much it is, irregardless of how you think that you should be perceived, they may decide that you’re an easy mark for taking advantage. It’s the same when people reply those 419 scams or reply to claim their lottery win for the lottery that they never entered. Apparently some people have been scammed by these several times because the criminals figured their first responses made them good ‘marks’.

Your ‘tell’ can be determined by your response or lack of it.

These actions all unconsciously communicate messages about you that betray any perception of you that you’ve tried to put across. These ‘tells’ communicate your vulnerabilities and / or areas of contradiction.

But don’t forget that it cuts both ways and that anything that falls into code amber and red behaviour is a “tell” particularly:

Anybody who is doing any of this stuff is not giving you their poker face; they’re showing you who they are.

Aside from making sure that you conduct yourself in an authentic manner by living by your own values, having boundaries, and essentially being you, plus handling anything that has been a “tell” in the past, it’s important to realise that particularly in the discovery phase of getting to know someone, you have to process all of the information and begin to recognise cues that indicate a conflict in values and trouble ahead. Only someone who suffers with Those Who Doth Protest Too Much is going to try to tell you who they are but everybody shows you who they are. The key is to take in all the feedback from the communicated messages (including unsaid and undone) instead of being ‘selective’ and only focusing on ‘good points’ or overvaluing something that in the grander scheme of things doesn’t mean much if your relationship cannot get off the ground.

It’s also important to remember that you can have a good “tell” in the form of your boundaries and also in being assertive by stepping up for you when you need to. These can only communicategood information about you. Having boundaries and being assertive aregood acts of self-care that will keep at bay or keep out those who don’t add good to your lifeanyway.

10 Things That Make Online Dating Tricky If You Don't Have Healthy Love Habits - Part Two
So...What is he thinking when he keeps making contact or tries to get back together?
Telling people what we think they want to hear leads to resentment on all sides