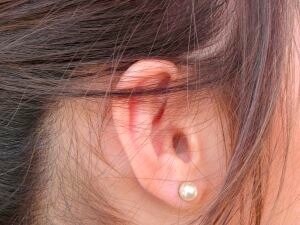 Last night, I woke up briefly and heard the familiar rush of ticking in my ear. I vaguely remember muttering “Listen to yourself”, being awake for a few moments to hear the noise stop immediately and then I went back to sleep.

Some of you may know that for nearly two years I struggled with tinnitus and vertigo in and on again/off again saga that at times was pretty debilitating. Giving up wheat a year ago seemed to kick it into touch but it returned again a couple of times. On some level, I knew that it had to do with stress, but as I was too busy spreading myself thinly between work, kids, etc, I didn’t really do anything with that niggling knowledge.

One day in the car, I was really peeved over a family matter and was venting my annoyance with the boyf. The annoying ticking started up again out of the blue. I’d stop talking and it would stop. I pointed this out to him and for a few moments I thought it was something to do with speaking or my jaw, but then the ticking went nuts again. We continued talking and my ear was rattling so loudly that I had to shut myself up and change the subject.

The niggling knowledge was there but it was like I just couldn’t (OK more like wouldn’t) see it.

In August, those niggles kept getting louder and louder and suddenly I remembered a book that one of my friends had told me about nearly a decade ago. I’d purchased it at the time, skimmed through, noted a chart of various physical ailments and what they meant and then seemed to stuff it to the back of my mind. Even when I was diagnosed with sarcoidosis and went on to eventually do kinesiology and acupuncture, I didn’t think to pick it back up. However I suddenly couldn’t stop thinking about the book and picked up a copy of You Can Heal Your Life by Louise L. Hay. Before I’d even left the bookstore, I flicked straight to the back and looked up tinnitus, vertigo and TMJ with my heart thumping.

In some respects it’s like I’ve come full circle and been reminded of a lesson I learned early on in my journey of learning to love myself and improve my life – that my body, basically me, is capable of telling me everything I need to know about me…if I’m willing to listen and pay attention. I did this very well for about four years and then I got sidetracked.

When I’d get together with my ex, the guy who had the girlfriend, I used to have terrible migraines. They’d often start round about the time when he was trying to get my clothes off… The migraines stopped when I started No Contact.

The morning after the first time we got together, I woke up unable to see properly out of one eye and had light sensitivity. In the months that followed, right up until the night before I wound up in eye emergency, each time we had a trist, my eye flared up.

There was the awful panic attack when he was haranguing me in the street because of his jealousy and possessiveness.

With another ex, I developed a terrible rash right around the time when I definitely should have taken a parachute and jumped.

I suddenly developed asthma at 21 with another ex (the one who said all the race things, tapped my mates up for threesomes etc), which stopped after we broke up although returned for a brief stint when I went out with the ex with the drink, anger, and secret drug problem.

And of course my health dramatically improved and I dodged being put on steroids for life when I dealt with 28 years of hurt, frustration, anger, and resentment two years into my struggle with sarcoidosis.

When I tell you all this, it’s not because I’m all new age or an evangelist for alternative medicine (I’m not) but what I do want to emphasise is that what is important is to pay attention to you and what your body may be telling you in the context of the type of life that you lead.

Just over two years ago, my youngest daughter was only a few months old and it was quite an adjustment dealing with a toddler and a newborn. And then my mother and I clashed again at the end of the summer plus my father was doing his Mr Unavailable thing and flaking out on me. Initially I was so rightfully p*ssed off that I felt validated, but then the whole thing seemed to resurrect a lot of old stuff in my subconscious. I’m talking dreams, suddenly remembering stuff that I hadn’t even remembered when I’d gone through the major period of working through my issues, suddenly hearing old conversations, and even arguing in my head. One day I had to acknowledge just how angry I was – a renewed, fresh anger that had been triggered by the fallout.

Once I started acknowledging, venting, and processing my frustration, primarily to the boyf and my brother, the dreaming, memories, and sudden mental conversations ceased. Even though I didn’t make the connection between the whole ‘ear thing’ and the anger etc, because I learned from having sarcoidosis that unprocessed anger, hurt etc has negative repercussions, I made a conscious effort to deal with it.

Sometimes you need a boot up the bum to connect the dots. Ever since I read what I actually already knew but didn’t listen to, the vertigo has stopped and the ticking has only appeared to give me a jolt. As soon as I hear it, I stop in my tracks and listen to myself.

Thinking about what I’m doing at that moment and whether it’s working for me.

Listening more closely to what I was just thinking moments before. It may be something brief that passed through that is important, or annoying, or both, or whatever.

Who am I around and what are they doing?

Is there something that has been on my mind all day?

Am I ignoring something? Denying something (I’m on the BS Diet so I do my utmost to avoid this)? Not acknowledging a feeling or the importance?

Am I remembering something even if it’s from the past that I need to work through even if it’s just to think about some more or put pen to paper? Reading comments on my last post triggered some ticking!

Am I doing something that invalidates my own feelings, worth? Are they crossing boundaries?

Am I in a familiar situation? Or what is the situation? What am I feeling? What do these feelings remind me of? You’ll find there are certain situations that subconsciously get your back up.

Am I eating something I shouldn’t be? Listening to my body for six years has taught me that I don’t seem to be able to handle an excess of anything.

Am I procrastinating about something?

Am I afraid or nervous without fully realising?

Am I trying to do too much? Am I overpromising myself? Am I overwhelmed? I actually, like a lot of people, get email paralysis!

Is there an assclown in the vicinity? Joke…sort of.

Is someone expecting too much of me?

Write it down, record yourself on your phone or even do a video, keep a Feelings Diary, have a nightly run down of the day with yourself so that you can go off to sleep and let your mind relax and process the day. Sit down for five minutes. Keep an ongoing list. Have the awkward conversations. Make decisions.

One of the things that had caused the spate of vertigo, tinnitus etc was frustration at rewriting Mr Unavailable and the Fallback Girl. Two weeks after I started listening to me, it was done. I have learned that while I have infinitely much more self-esteem and take no prisoners, that I hate not doing things, I do get very impatient and frustrated with myself, and I probably (OK do), still have to ensure that I stay on top of that fear of failure, fear of success thing that can put you in No Man’s Land (another post idea there!).

In short, listen to yourself. What are you trying to tell you?

Slow Your Roll: Why Being Asked For Your Number is an Expression of Interest, Not a Guarantee
What if your only resolution this year was loving yourself more?
If You Neglect Your Own Needs You'll End Up Hungry In Your Relationships