“I can’t believe they’ve changed – What’s wrong with me?” 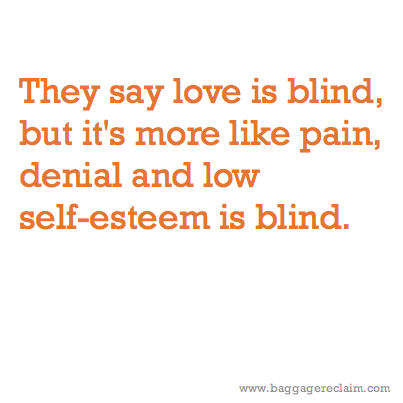 A few years back, a longtime couple finally got married after a gazillion years together (OK a couple of decades or so), kids, abuse, affairs, outside kids, and a steady, unrelenting devotion by her that would make your eyes water in disbelief – they say love is blind, but it’s more like pain, denial and low self-esteem is blind. His harem members (and there were many) were shocked and there was plenty of speculation, gossip and a helluva lot of mourning and feeling rejected going on.

I see this going on in the comments and stories readers share with me:

They can’t believe that their ex has ‘changed’ and practically want to run a sting operation to prove it. It’s either that or they want to take ‘revenge’ for them treating them badly under ‘false pretences’ and for (in their relationship) being a violation of the Trade Description Act because it ‘turns out’ they were wonderful and they got a bad deal. Then they wonder What’s wrong with me?

They’re convinced that their ex has spontaneously combusted into The Best Person That Ever Walked The Earth Who Has Also Practically Walked On Water ™.

They feel crippled by this idea that somebody who they termed as being a ‘narcissist’ and ‘abuser’ (or assclown) has ‘changed’. “Damnit! I’ve spent most of my adult life trying to give salvation to someone who has walked on me like a doormat and who is totally unworthy of my time because I felt like I would be good enough and now they’ve been able to save/fix/heal/help them! I’m worthless!”

Incidentally my inbox is full of emails from women and men essentially asking me why they’re not getting empathy from someone they call a narcissist or an assclown. Er, isn’t ‘empathetic narcissist’ (or assclown) an oxymoron? It’s like specifically buying a Fiat Punto and going “But I want it to be a BMW.” If you want empathy and a relationship, you’re barking up the wrong tree with a narcissist. Ironically, I don’t think we realise that when we expect to be made the exception to the rule and a psychological rule at that…it’s delusions of grandeur.

So this woman who ‘finally got her man’ and her ‘happy ending’ (nausea alert), what is her relationship now? She’s married to someone who continues to do a number of the things that he did when they weren’t married and she’s now a married woman with a harem in the background. Really, is that ‘winning’?

I’ve heard and seen this story thousands of times and it’s sad that outsiders looking in persecute themselves as if someone who is ‘mighty special’ has gotten away. I think we fail to realise that by being involved with someone who would treat us without love, care, trust, and respect and even get their way by force, we’re pumping them up and when we knowingly participate in a harem, we boost them into the stars.

When you’re beating yourself up for not changing someone who treated you in a less-than manner and envying the person who has ‘settled down’ with them, you’re guilty of wanting validation, to be chosen, to be given a title without really giving due consideration to where this all really fits into the bigger picture.

You also want to ‘go back in time’ and ‘undo what’s been done’ by having another shot or even practicing so-called ‘new habits’ on the old relationship. “Oh if we were together again, I’d do this and this and that.” If you’re still hankering to road test a new you on a previously code red relationship, it’s safe to say that you have some more road to travel.

What’s the point in ‘going back’ just to try and be ‘right’ and make you feel better about previously dubious choices? You’d get over any previous experiences if you left the harem and worked on the bigger issue at hand – Why, even in the face of being treated in a certain way by somebody and even knowing that they have fundamental issues that are a barrier to a relationship, are you still there trying to go back and obsessing about them, when you could be addressing why you were with them in the first place and mending that?

The reason why you want to be believe that they’ve changed is because it fits into your tendency to blame you. Why else would you do it? It’s like forgetting that their character was self-evident in the relationship with you. In fact, it seems like you’ve forgotten that they have a separate identity because you’re going “I can’t believe they’ve changed – what’s wrong with me?” when the first half of the sentence was talking about a person who is entirely separate to you.

What’s ‘wrong’ with you if you really want to get it down to a ‘wrong’ thing is actually that you’re not changing. Your perspective, your habits haven’t shifted ‘since them’, but they can do. Take the focus off them and bring it (positively) back to you. You don’t own a person whether they change or not. You don’t have ‘copyright’ over their assholery.