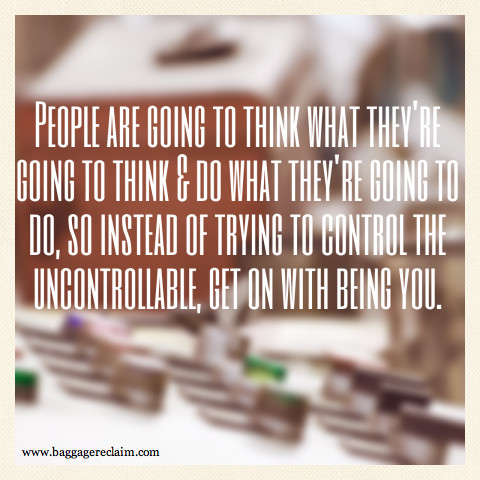 Everybody wants to be liked. We can’t help it and it’s normal. We all want acceptance and fear rejection. How much we want and fear these things however, has a great deal to do with our happiness and the general quality of our lives.

When our journey involves banking too much of our self-esteem (including our perceived worth) on how much we’re liked, it predisposes us to having a greater sensitivity to rejection. When the route we take is determined by our fear of rejection and we have a lengthy index of things that we equate to meaning rejection (e.g. experiencing disappointment, hearing / receiving no, people not wanting to change, experiencing conflict, people we like not agreeing with us all the time, people not living up to our assumptions etc.,) our actions become very geared towards protection. We take routes that end up limiting us because what we do is driven by what we think and unless we’re thinking “I’m afraid of ______ but I’m going to go ahead and do _____”, what we’re thinking is “I’m afraid of _____ so I need to protect myself  by doing ________ which I think will help me to avoid/minimise it or by doing ______ which I think could let me try and get what I want without risking myself” and it invariably ends in tears. Like when we’re afraid of putting ourselves out there so we opt into a casual relationship.

Everyone wants to be liked but we can spend a lot of our time here repeating the module of lessons that when we’re ready to heed them, teach us that what we’ve been seeking is something that we’ve had the power to give to ourselves. We’re at our happiest when we practice self-acceptance instead of our perception and treatment of us being conditional. We think we’ll be happiest when ‘everybody’ likes us which is like trying to cup the ocean in our hands, and even if it’s not ‘everybody’, we can still end up seeking an ever shifting ‘critical mass’ – we convince ourselves that there’s a tipping point of the adoption of Product Us. We think our lives will be so much better when we feel confident that people who we think matter oh-so-much are seeing us in exactly the way that we want to be seen.

Do I want to be liked? Yeah sure, but I want to like me more than I want others to like me because when it was the other way around, I quite literally hated myself and what I’d come to represent.

There’s a fine line between wanting to be liked and needing to be liked, where your life becomes about seeking popularity with certain designated folk, being admired, and having people pat you on the back and validate that you’re doing a ‘good job’ at being you. When I see the torture that people of all ages put themselves through these days, it’s like we’re trying to run our own fan clubs.

We want to be liked but we can be guilty of crossing into collecting attention. We go from having self-esteem to believing that self-esteem is the level of external attention and validation received. It’s like we’re trying to live in a ‘live Facebook’ full of ‘likes’ and comments.

I want to be liked but I don’t want to be liked that much, “that” being that point where it’s actually need and I’m prepared to bust my own boundaries, standards, values, beliefs, happiness, and basically my identity and my life.

I’ve learned the hard way that if I don’t like me, it really doesn’t matter who likes me whether they’re being genuine or not. I used to question what these people saw in me or expect them to be disappointed in a matter of time due to my ‘flaws’.

You have to walk around in your body, you have to look you in the eye, and you have to carry around your head full of thoughts and go to sleep at night after spending your waking hours tapdancing for your fan club and then doing the splits into the doormat move. You’re the one who will have to live with the bullshit.

You cannot be liked by everyone, but you know what? The sky isn’t going to fall down, you’ll live to fight another day, and you don’t like everyone either. Even saints didn’t like everyone so don’t kid yourself that you’re the Patron Saint of Liking.

Convincing is a drag and a suspicion inducer. The harder you try to be liked, is the harder the person who you’re breaking your spirit over will find it to like you, not least because trying to be liked is different to living your life and being you and being liked as a byproduct of healthy interactions.

You’re just not that desperate.

Get on with the business of living. Are you being you? Are you on a low BS diet and being honest with respect? Do you like who you are? Are you willing to get uncomfortable, assert yourself and face conflicts instead of being a people pleaser? Are you being and doing as you expect from others? Are you living your life according to your values? Is it a definite no-no for selling you down the river? That’s the stuff that matters, not being liked by everyone.

The funny thing is that yeah, some people aren’t going to like you because they don’t like something about you, but actually, it is far from always being about something you’ve ‘done’ and often it’s about them and how they feel about an aspect of themselves. Not everyone is going to like you but they’re not people who you need to be giving your energy to.

Podcast Ep. 242: But Will You Actually Get Into Trouble?
Podcast Ep. 2: Triggered? What's the Baggage Behind It?, "You complete me", What To Do When You Bump...
Myth: There Are No Good Men to Date (Especially when online dating) Part 2