“If It Were Me, I’d….” When You’re Perplexed By People Not Acting As You Would 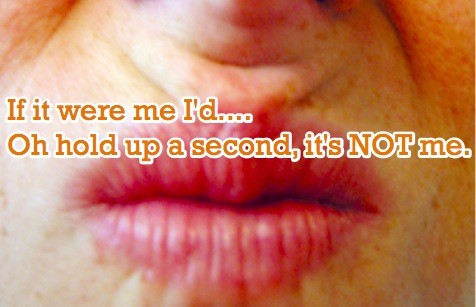 As soon as I hear the words “If it were me…” or “I’m the type of person that…” and they are explaining their frustration with a person, or even their rationale for making excuses for them, I internally say “UH OH.” It immediately indicates that they are very likely blinkered in their view of things and over-empathising.

We all have our take on things which represents how we think we’d act in a situation, what we think might cause us to react in a certain way, our perception of what is behind our intentions and those around us, how we think others who represent our values and ideals might or ‘should’ act, and in essence, we all have our expectations. When a situation or person doesn’t meet those and our hopes, we are disappointed, which is natural.

The trouble with focusing on what you would do or highlighting what type of person you are, is that it makes it very ‘I’ focused – you can’t see the wood for the trees. You’re just one person and the only people who share a similar view to you are those who share your values. The fact that you are interested in someone, or they’re your friend, or you’ve slept together, are in relationship, are madly in love with them, or they’re even related to you, doesn’t mean that they will see or do things in the same way as you.

Even if someone does something similar to you or is doing the same thing at the same time as you or with you, it doesn’t mean that you share the same intentions or are even governed by the same mentality. Classic example, two people sleeping together, one intending for it to be more and feeling like it’s very special and they’re ‘making love’ and the other person is just having sex.

You might be or do something for certain reasons or under certain circumstances, but someone else might not.

When you over-empathise, you think you’re putting yourself in their shoes, but you’re actually putting yourself in your own shoes, imagining what you would do and feel in the same situation and what you imagine your intentions might be, and then you’re running with the assumption and projecting it onto them. It’s like half empathy or ’emp’ – you forgot to include the reality of who they are.

You, for instance, may believe that you would only be driven to crime because you were desperate and/or you were going through a terrible time, and that you’d be wanting a better opportunity to come along / to be rescued by someone who cared about you, but someone else may commit crimes for entirely different reasons and actually have no desire to stop.

Equally, you may assume that because of your own experiences and background that someone else who has their own experiences and background where you may feel some ‘synergy’, that they’re operating under the same constraints , mentality, and habits as you. It makes you ask, “Who am I to judge?” and you go “Ooh, I have big problems and have made a few mistakes in my time and need someone to give me a chance” so ipso facto you think that they need you to give them a chance.

Depending on what the disparity is between what you would do and what they would, and in turn what this ‘gap’ represents about their character, values, and your future interactions with them, the fact that they are doing things very differently to what you would may indicate incompatibility.

What you don’t do is make it all about you in a “I think that people should think and act like I do. Why isn’t he/she doing that? Is it because I’m not good enough?” You’ll go into situations with a blinkered view and assume that people are singing from the same hymn sheet.

You’re not interacting with clones of yourself. The only person who truly thinks and acts like you is you. You don’t really need the person if all you’re going to do is project onto them who you think they should be. You have to take the time to get to know people as they are and see them for who they are, not as extensions of you. If you don’t, you’ll become complacent and you’ll make dangerous assumptions.

The fact that someone acts different to you doesn’t make your actions, mentality, and choices wrong or invalidate them – they’re yours. It may not even mean they’re ‘wrong’ but what it may mean is that you’re incompatible.

Knowing what you’d do under certain circumstances and knowing how you act and what you think, is you acknowledging your values, and when there is a disconnect that causes you to be all “What the what now?”, you can look at the results and how you feel and see what someone’s perspective is.

I’ve had many a reader tell me for instance, that if they kept going back to an ex who they knew was crazy about them, it’s because they’d want to get back together. All of these people have felt the pain of discovering that this wasn’t the case for their ‘boomeranging’ exes. They could spend more time being perplexed by the fact that they weren’t back together and hoping that ‘next time’ their ex will ‘do the right thing’, or they could recognise that it might be how they roll, but their exes are rolling them out like a doormat.

You can think about “If it were you” but you can equally ask “It is them – what are they doing?” You can be perplexed, or you can be… in reality.

If you want to ‘un-perplex’ yourself, check out my books The Dreamer and the Fantasy Relationship and Mr Unavailable and the Fallback Girl which are available from my bookshop.

Playing Games in Relationships
It's Not Your Intuition That Misleads You - Evaluate The Reasoning and Knowledge Applied
If You Neglect Your Own Needs You'll End Up Hungry In Your Relationships
Share this...