If you feel bad after you ‘help’, it probably wasn’t ‘helping’ (Why it’s good to stay out of Other People’s Business) 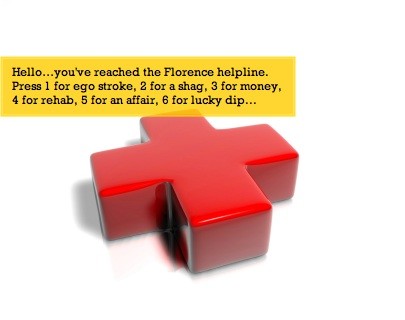 In life I’ve learned through the pain of people pleasing experiences not to do stuff for shady reasons – it’s the silent, hidden contracts, the hidden agenda, the I’ve Been a Doormat For You So You Should _________ traps. ‘Help’ along with its sister ‘giving’ is what sets many people on the path of ‘Florence Nightingaling’ where they take up vocations in helping others by seeing themselves as solutions to Other People’s Business. Granted that helping in terms of genuinely providing assistance to others, making it easier for them to do something, and improving situations is something that we all very much need to do…but… you already know that I’m not talking about that kind of help.

If you feel bad after you help (or give), you’ve helped for the wrong reasons.

Sometimes we have to learn not to get involved in Other People’s Business by making ourselves the solution to their personal problems which are theirs to solve. When we see ourselves as the external solution to someone else’s internal issues, it’s because we’ve busied ourselves with diagnosing their business through our eyes and no doubt in the context of our own agenda, and then we’ve gone “Ding, ding, ding, opportunity to be needed alert” and prescribed ourselves as the ‘medication’. Even if you make something that’s none of your business your business, it still doesn’t make it your business. It’s like when the Other Woman/Man complains about the main partner – someone else’s marriage/relationship is none of their business! 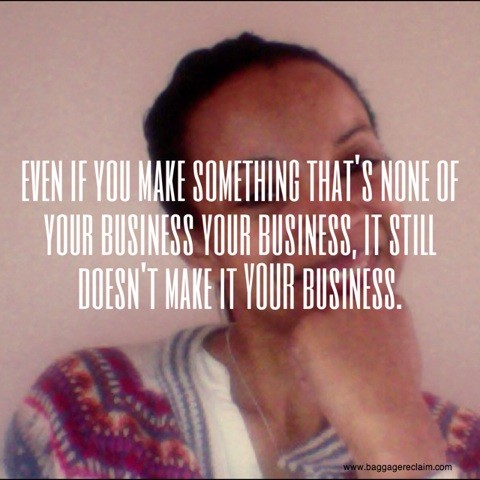 Some of us like to feel needed because like the typical people pleaser, we don’t know or assert our own needs and so busy ourselves fannying around and meeting their needs or what we think their needs are, and then somehow expecting to be fulfilled during the process. It’s deriving ‘worth’ from the approval of others and also gaining validation from having this ‘purpose’ or seeing what appear to be initial fruits of our labour. And note that I say what we “think” their needs are – sometimes we assume that the ‘help’ that we’re providing is the help that’s needed because we assume the problem, but it might not be the problem or even if it is, the person may not want or need your help or may not even see it as a problem.

All of this ‘helping’ is a distraction.

I’m not saying don’t help others but help isn’t help if you expect something back; it’s business. It’s an agenda.
If you feel crappy after you ‘help’ people, it’s time to examine your motives and what you truly expected. You also have to be careful of having an Overactive Sympathy Reflex – it’s where you feel pity, which is sympathetic concern for the misfortune of others and it becomes your ‘trigger’ for wanting to engage them whether it’s for friendship or a romantic relationship. Like and love don’t look like pity.

If you wouldn’t give the help if you didn’t think that you would get the perceived / expected reward for it, don’t do it. Don’t.

If you wouldn’t do the ego stroking, shagging, the lending a shoulder to lean on, the accepting shady behaviour, the keeping it zipped when you really want to speak your mind, if you didn’t think that you were going to get a relationship, a free pass on something or the opportunity to ‘collect’ at a later date, I’d restrain your ‘helping’ hand.

‘Helpers’ usually end up erupting over this sense of feeling taken for granted after being passive via people pleasing including Over-giving. If you’ve held back criticism, your opinion, boundaries, and have essentially avoided conflict, there’s a quiet expectation of “I shouldn’t be criticised because I don’t criticise him/her”, “Restrain that honesty with me because I’m not being honest with you”, “Do as I want because I’m letting you ride me like a doormat pony” and “Don’t make waves because I’ve practically broken my back to eradicate all possible opportunities for conflict”.

Helping others will not control their behaviour. It isn’t necessarily going to ‘make’ people do as you want or expect and it doesn’t mean that they ‘should’ meet your needs. If the type of help you’re giving involves assisting people in avoiding their own personal responsibilities or even assisting them in having the opportunity to bust your boundaries, that’s not help. If your idea of ‘making things easier’ for a person is pretty much wiping out all reason, responsibility, accountability and their contribution by being willing to attempt to row the boat with one oar or even taking all of the blame, that’s not help. If you’re ‘improving situations’ by enabling someone elses issues that’s not help either.

Ironically, when you try to fix/heal/help people who are already reliant on external solutions by attempting to be their ‘solution’, you’re actually trying to replace one unhealthy solution with another.

Just like I say to people that you don’t owe someone sex or a relationship because they brought you dinner or gave you the time of day, a person doesn’t owe you a relationship or whatever just because you’ve sold you short or you’ve ‘helped’ them. If your whole relationship is built on ‘helping’, it’s not a mutual relationship. You never have to feel like you’re chasing a debt or trying to create a tipping point of reciprocation if you only get into or remain in mutual partnerings. This will stop you from doing ‘stock takes’ and having people unwittingly getting into debt with you.

You also know true help when you help yourself, because at least then you know that you’re helping not looking for secret salvation on inappropriate sources.

We can feel guilty about not helping and yet sometimes we need to realise that we spend less time doing real help and too much time engaging in stuff that isn’t really helping anyone. If you’re helping people for the right reasons, you have nothing to feel guilty about nor do you have anything to feel bad about as a person. Sometimes when we attempt to help ‘everyone’ we help no one. Don’t try to save others by bankrupting your self-esteem – it’s like robbing Peter to pay Paul. Know your own line so that you know the line of others.

You Just Don't Have That Kind Of Power: You Haven't 'Made' Someone Be Or Do Something
Podcast Ep. 259: Let's Talk About Overgiving and Overcompensating in Our Relationships
Love isn’t a reward for being a good person, and we don’t like this