If You’re Going To Argue or Tell Someone About Themselves, Don’t Do It By Text or Email 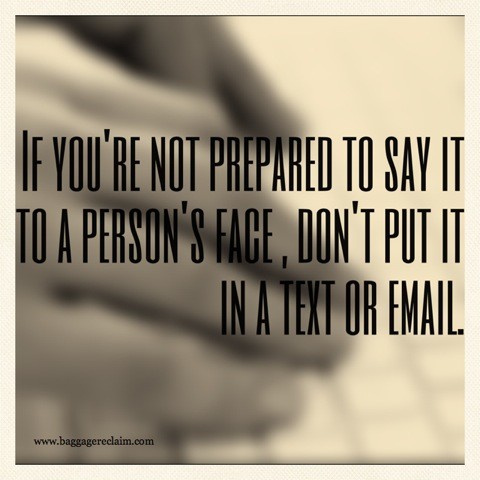 I have a few rules for myself that keep me out of a lot of trouble, even though some days my last nerve is being worn down and I want to let rip:

Even though it’s felt like I have to tape my fingers together at times, I don’t reply in haste (or even at all) to conflict filled emails. Basically, I never reply with my first heated response and distract myself in something else.

I never respond to any form of conflict via text, end of.

I don’t put in writing or say online anything that I’m not prepared to say to someone’s face and this forces me to consider what I do write or say very carefully.

I share my little rules for myself because many of the people I hear from who are struggling with unhealthy relationships or with breaking unhealthy habits have issues around dealing with conflict and criticism, and think nothing of arguing or even telling someone about themselves via text or email. In fact, I’ve even seen arguments take place over tweets and status updates on Facebook but that’s a whole other subject in itself! Why are texts and email a very tempting prospect for conflict?

Because they don’t feel as vulnerable as ‘conflict conflict’, you know where you have to get on the phone and you say something and then they respond, or where you see one another face-to-face. It’s lazy, ‘safe’ ‘communication’.

There’s no real discussion, there’s no full-on arguing, there’s no dealing with potential criticism as you express your feelings and in the immediacy of pressing send, you can feel like you’re on a high that doesn’t take long to disappear. It’s like the ‘perfect’ yet so not perfect way of avoiding conflict in the way that you fear it.

With texts and emails, you’re running the show. It’s one-sided and everything can be said without interruption/criticism or having to see the other person’s reaction, and in those moments, you can forget to keep it real and human. You only have to read the comments section of some news sites to see how people lose the run of themselves when they don’t feel like social norms apply or that they’re going to be interrupted or experience real consequences.

Arguing or telling someone about themselves via text and email is actually a form of passive aggressive and at times aggressive behaviour.

In ‘olden times’, you’d have to go and see the person or pick up the phone, or yes, write a letter. The tricky thing with the latter is that there’s a delayed response – you’ve got to stick it in the post box, they’ve got to receive it and then they may or may not write their reply.

Texts and emails are low effort, can be sent instantly (I know some of you even track to see when they’ve been opened!) and if the other person wants to respond or even go toe-to-toe with you, they can do so immediately.

The instant send and reply is a problem in itself because you would hope that if you had to put pen to paper, get a stamp, stick the letter in the postbox, that you’d consider your actions very carefully. When people share their stories with me about their text and email debacles, there’s a lack of self-control and an element of seeking attention, validation, and instant gratification – it’s like relationship crack that keeps you engaged in the unhealthy dynamic.

Arguing via text and email can give you a sense of control over a person and a situation where you might not feel that you have any.

I’m all too familiar with wanting to be ‘right’ and to have the last word and in relationships or situations where we feel powerless or that someone has done us over and we think they might be getting away with it, sending texts and emails can seem like the ‘easy’ solution, especially if we’re actually scared of having to say it to their face or over the phone.

When you’ve been a people pleaser and played doormat while suppressing your needs, wishes, expectations and your true opinions including where you feel angry or hurt, you can end up doing a couple of things:

Texts and emails tend to be read in the way that we think they have been written or the way that we’d like them to sound, which is why so many people are in fantasy relationships based on seeing too much meaning in texts and emails from someone with whom they’ve had very little human-to-human contact.

Words can dress up hot air and package bullshit as roses but on the flip side, when sent in haste without respect, due consideration and used to express anger and opinions about a person, words can look and sound very offensive.

Tone is very open to interpretation and heated texts and arguments can be very intimidating. They can also undermine your credibility because in the wrong hands, the person who actually may very well be in the wrong will seize upon what you send and use it to legitimise their reasons for their shady behaviour. They’re also likely to think that this is all part of a game and that you’re just not that serious about a relationship or finding a resolution.

Conflict is a natural part of life and unavoidable. Our relationships romantic and otherwise evolve and progress out of learning to interact with one another and to navigate the trickier situations.

I still do not like conflict. Sure who does except for the drama seekers of this world that would have a fight with a paper bag? Conflict used to terrify me due to the associations I had with it from childhood. Conflict to me meant that people don’t like you or that the relationship is over or that I was disapproved of or that the person was an asshole. None of these things are true.

Conflict is what arises from misunderstandings and conflicts in opinions and yes, sometimes in values. Conflict is also what needs to happen when someone is creepy creeping or tap-dancing all over your boundaries.

Just like when you stick with a primarily email/text relationship and somehow expect it to turn into a full-blown relationship in spite of minimal face-to-face and interacting, how are you going to be able to learn how to work through conflict if you hide behind your fingers?

If someone sends you a text / email with the potential for conflict, be the bigger person and pick up the phone or respond asking to meet or to arrange a time to speak. Yes they might not respond but the person who is only going to do conflict on their terms where they keep at a distance isn’t really going to be going anywhere fast with you.

If you truly like, love, or respect someone, show how much you value the relationship by raising any issues over the phone or face-to-face. Yes it won’t be ‘easy’ but if you’re not prepared to step up for you or to truly attempt to address the situation in a manner that respects both you and the other party, it’s a code red alert.

A major bonus of avoiding conflict by text and email and stepping up and having the tricky conversations is that you’ll flush Future Fakers and other shady folk out of your life very quickly.

I’ve also found that conflict is very rarely as big as we imagine it to be, which is probably all the more reason why we shouldn’t engage in these one-way arguments where our ego’s, imaginations and fingers run wild!

For some of us, if we don't have to hustle, we don't feel interested
Querying Actions Not Matching Words Isn't About Trust Issues
Podcast Ep. 55: Stage 0 Sexting, Remembering vs Experiencing Self, Are You Ignoring Me?