Indecision About You Isn’t Sexy Or Acceptable 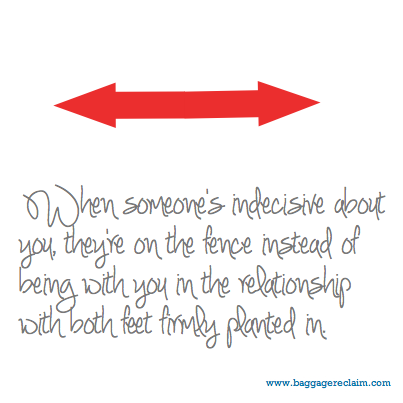 If you’ve ever been with someone who blows hot and cold by one day professing their love for you and talking about the future to the next day getting cold feet and saying “I don’t want to hurt you” or even ‘going dark’, you’ll know that being on the end of someone’s indecision isn’t good for your soul or your self-esteem.

A friend was excited when her boyfriend said that he was taking her away and that he was going to buy “a ring” all without any prompting from her. On the day that they were due to fly off, he showed up weeping and saying “I can’t do this”. Somehow she forgave him and then he flipped and flapped for another few years until she ran out of patience and sympathy and made up his mind for him by removing herself out of the equation.

When someone is indecisive about being with you, it’s not sexy or acceptable.

Being vulnerable is something that the great majority of people have some degree of fear about but it’s a necessity for something as basic as feeling our own feelings and taking in reality as well as being a fundamental component of our relationships. None or limited vulnerability equals intimacy issues equals commitment issues equals balance, progression and consistency issues equals you dealing with someone who isn’t available for an available relationship.

They’re on the fence instead of being in the relationship with both feet firmly planted in.

Indecisive people have commitment issues. They appear to make decisions and then afterwards start to panic and backtrack to relieve their fears. Then when they feel calm again based on the change in decision, they then worry if they made the wrong decision. And round and round they go.

You can end up falling into the trap of trying to help them make up their minds and even attempting to allay their fears and in the meantime, you end up forgetting your own needs and cross into over-empathising instead of recognising what indecision means in the bigger picture. You can also end up internalising their anxiety. Maybe I should I have doubts too?

Indecision is actually a decision in itself and to be on the receiving end of it can be torture. Someone who truly cares for you and is empathetic will recognise that it’s not acceptable and will not continue the flip-flapping or take advantage of your own decisiveness about them.

When someone then starts telling you that they’re being indecisive because they don’t want to hurt you, it raises the question of which crystal ball they’re using? It’s more like self-knowledge and experience. They may be afraid of being honest and assertive or they just lack the self-knowledge to understand their own needs which would in turn help them make a decision that reflected not only who they are but also had some respect and consideration for you. If they don’t understand their own needs or feelings, they’re certainly not going to be able to empathise either. They tend to be reactive and will reel you in on a whim and then flush you back out of their hot attention with a bump back to earth.

It’s not ‘bad’ to have a wobble or to be a little afraid of stepping forward. I think it comes with the territory with relationships. The difference though between the person who’s indecisive and the person who has both feet in is that the latter knows that vulnerability is needed and weighs evidence against their fears and proceeds based on the feedback.

Both of you may be afraid but you’re taking the leap of faith together.

The person that’s indecisive keeps wobbling and after a while, you can end up being uneasy because you’re trained and attuned to expect a wobble. You end up feeling distrusted. You end up feeling like you’ve got to campaign for you and make them feel better about the last person that they were with. It’s not your job to help someone get over their previous relationships and trauma. You can be empathetic and sympathetic but if these issues are getting in the way of them being able to differentiate between past and present and forge a mutual relationship with you and they’re not making it a priority to resolve the issue, you have to step away.

The biggest problem with this whole indecision malarkey is this expectation whether it’s communicated directly or not, that it’s you that’s got to do something to relieve that indecision when actually, the indecision is about them, even if they try to put it on you. The next biggest problem is this inherent assumption by them that you’re supposed to be ‘OK’ with this indecision (like a show of your commitment to their uncommitted selves) and if you respect what they’re saying and don’t want to participate, you’re ‘pressuring’ them. NO, you’re respecting what they’ve said instead of letting them have it both ways.

This is how so many people get downgraded to casual. “OK I’ll let you test drive me in casual mode until you’re over your wobble.”

Relationships require a leap of faith. You don’t want to be taking that leap and then being dragged back or left hanging and pleading for the other person to join you. It takes the joy and the fun out of the relationship and after a while, it’ll begin to erode at your sense of self because it’s human nature to wonder what you’ve ‘done’ and that’s just not fair.

I’ve learned this the hard way that if you’re faced with someone who’s indecisive about you or the possibility of a relationship, let them make up their minds on their own time, not yours.

Don’t see it as a challenge and an opportunity for validation – see it as great big red warning that whatever it is that you thought you both have had going on, they aren’t on the same page as you and have their own issues. If you blame you for their indecision, you’ll miss some very vital feedback about this person and your relationship. If they come back, they return decided and if they then start to passive aggressively roll it back after a time or flake out again, cut ’em loose.

Ultimately there’s something so not right about you being decided on a person and a relationship that the other party isn’t. You think you’re copilotting when the other person is trying to make an emergency exit. If they’re on the fence and you’re waiting on them, you get put on the fence too. In the end, you’ll have to do for the both of you what they clearly can’t do – make the decision that puts an end to all of this indecision and leaves you with your sense of self intact as well as being available for an available relationship with someone who isn’t resisting you with their indecision.

Reader Question: Is it normal to want revenge on my married assclown?
Podcast Ep. 99: Listening To Yourself & Knowing When To Call It
The Trouble With Feeling Owed After a Relationship 'Investment' Goes Sour