It’s Not That ‘One False Move’ You Made 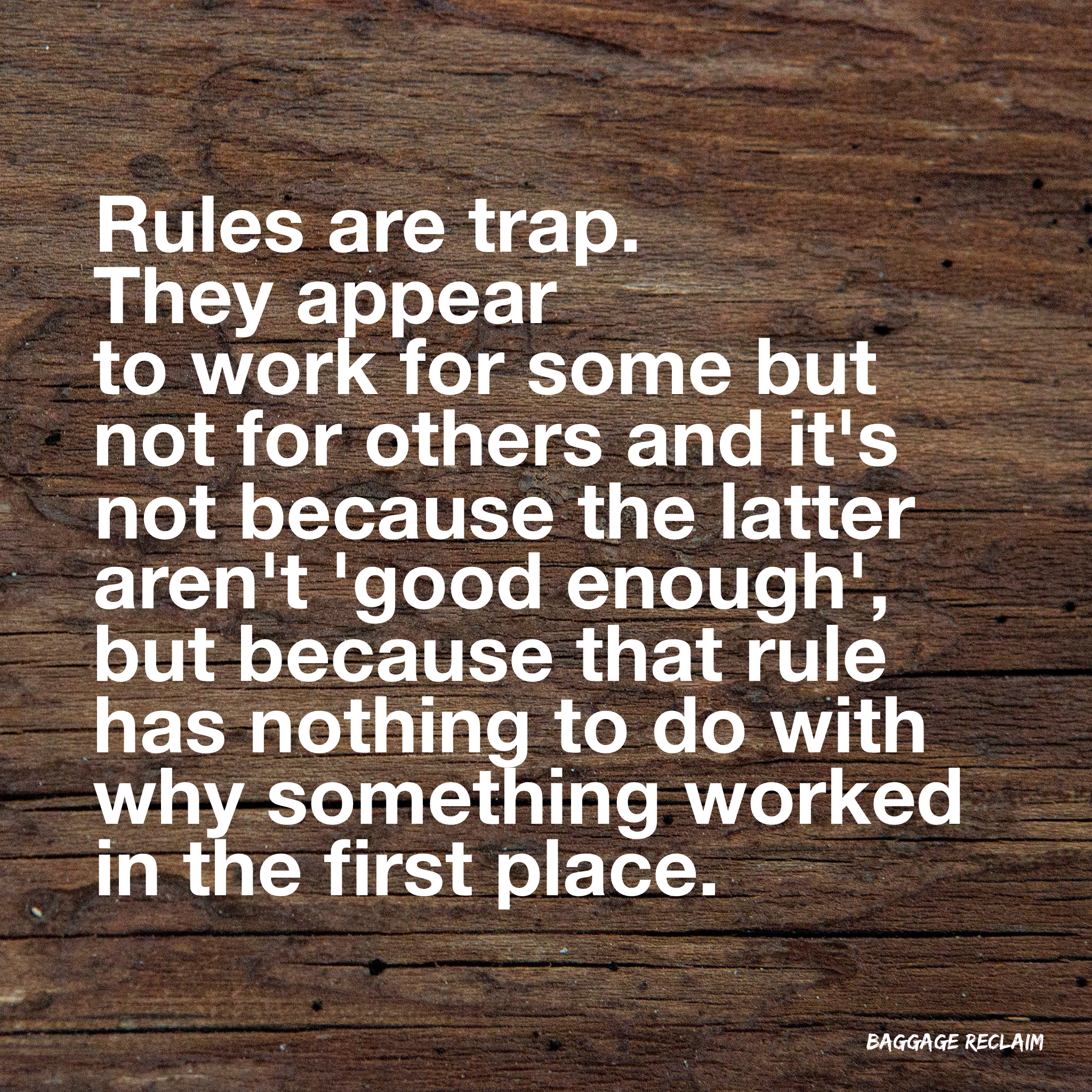 Sometimes, if not often, we’re too quick to convince ourselves that we’re the architect of our own failure. We give ourselves too much credit for being in control of stuff that we’re not. As a result, when we experience disappointment and we’re of the inclination to analyse where we think we effed up (based off of the assumption that disappointment’s caused by us not doing the ‘right’ actions to steer the outcome to the correct one), we latch on to something that becomes a rule for our future behaviour. Baggage-Reclaimers’ big example of this is variations of, I ‘put out’ after X hours/days/dates/weeks/months and if I hadn’t, I wouldn’t have jeopardised the relationship. So let’s think about this:

If we weren’t in a relationship at the time, how can we lose or harm something we didn’t have in the first place? Surely if the deal was dependent on both parties not sleeping together, sex wouldn’t even be on the table? Now, I’m not saying that dating is like the lottery but if we were to break down or take a week off work every time our numbers didn’t come through, we’d be setting ourselves up for a great deal of pain due to our, I-did-this-so-why-didn’t-they-do-that mentality.

Some will argue that ‘putting out’ gave the other party the ‘wrong impression’ and you know, that’s pretty jacked up when you consider that this would make them the authority that had the power to decide which way the relationship was going, which makes the date an audition. The thing is, who did these people have sex with? An impersonator who stepped in to do the deed so that the date wouldn’t have to see things through after it became obvious that they weren’t around future wife/girlfriend/husband/boyfriend material?

On the basis of these experiences, people come up with follow-up rules.

‘I don’t sleep with people until X date/week/month.’

‘I won’t sleep with someone until they’ve said that we’re exclusive and that we’re in a relationship.’

Now granted, I can see where they’re going with this thinking and it’s not about whether it’s ‘bad’ but it is about recognising that people come up with ‘rules’ for what they should and shouldn’t do i because they feel guilty for what they think is having massively screwed up in the past and so the rule is there to protect them from what they’re afraid of. It’s to manage their fear and guilt.

In their mind, waiting gives more control over unknown factors. They reason that they can breathe out and ‘give up the goods’ because it’s official that it’s a relationship. They’ll say that plenty of people claim that the reason they’re in a relationship is because they ‘waited’ and while leaving sex off the table means that it’s not there to cloud our judgement and put us in The Justifying Zone where we remain to justify having made the sexual ‘investment’ in the first place, those people aren’t still together because they controlled the situation with sex. 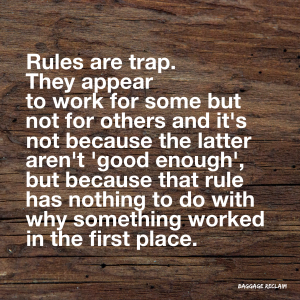 Unfortunately as many can attest to, something that works for some won’t work for others, so we can wait to have sex but unless who we’re waiting with is a loving person and we ourselves are waiting, not because it’s a ‘rule’ designed to control the uncontrollable but because it’s our value and what feels good and right for us, that doesn’t mean that post-sex, we’re assured of the relationship we want.

This is a similar case with not waiting: if sleeping with somebody is what we want to do and we are conscious, aware and present enough to be able to handle the potential emotional consequences of sex, then we can rock on, but if our inner rule is to have sex because we’re afraid that if we don’t, we won’t be in with a chance of winning the grand prize, we’re already on the back foot before any pants get dropped.

When the rule doesn’t work, it’s not because we’re not good enough but because that rule has nothing to do with something worked in the first place.

Anyone who’s going to rule someone out for a relationship because they feel that we had sex with them, possibly at their instigation ‘too quickly’, or because they’ve had to wait ‘too long’, isn’t the right person for us. If the possibility of love can collapse on ‘one false move’ like that, we’d all be screwed.

Now you can substitute really any rule that you’ve created to protect you from the past happening again or to try to control your experiences, and you’ll see the same scenario play out. Trying to switch things up or even play The Opposites Game where you latch on to one factor that you think botched things and then try to choose an opposite partner next time round, only to wind up disappointed yet again, reaffirms why these faux rules are a trap.

It’s no wonder people feel so demoralised by dating because they give up who they are including their values to try to control the uncontrollable, only to find that no matter what they do and no matter how many times they tweak and switch it up, the ‘rule’ doesn’t work. On top of this, there’s never just one rule so even if they get into a relationship, the fear of not doing everything ‘right’ means that they’re scrutinising their every move and trying to follow other ‘rules’ out of fear of jeopardising the relationship. That’s no way to live never mind love.

Don’t put your disappointment all on this idea that you made ‘one false move’ or a series of them because you may be tricking you into believing that you missed out on something that wasn’t there, or you might be missing the wood for the trees.

If you’re tying yourself up in knots trying to figure out the magic rule and formula for ‘getting’ love, untwist yourself and cut you some slack by identifying and letting go of your rules and instead do things because you want to and it’s who you are, not because you’re trying to influence or even control others. Suddenly, it won’t feel as if the other party holds ‘all the power’ and you will be in a position to show up to your relationships as an equal

Podcast Ep.46: Making New Friends, Are They Emotionally Available?, Celebrate You
You can't date or forge a relationship without chipping in - it's the cost of participation
Advice Wednesday: Help! I'm a doormat to my best friend
Share this...