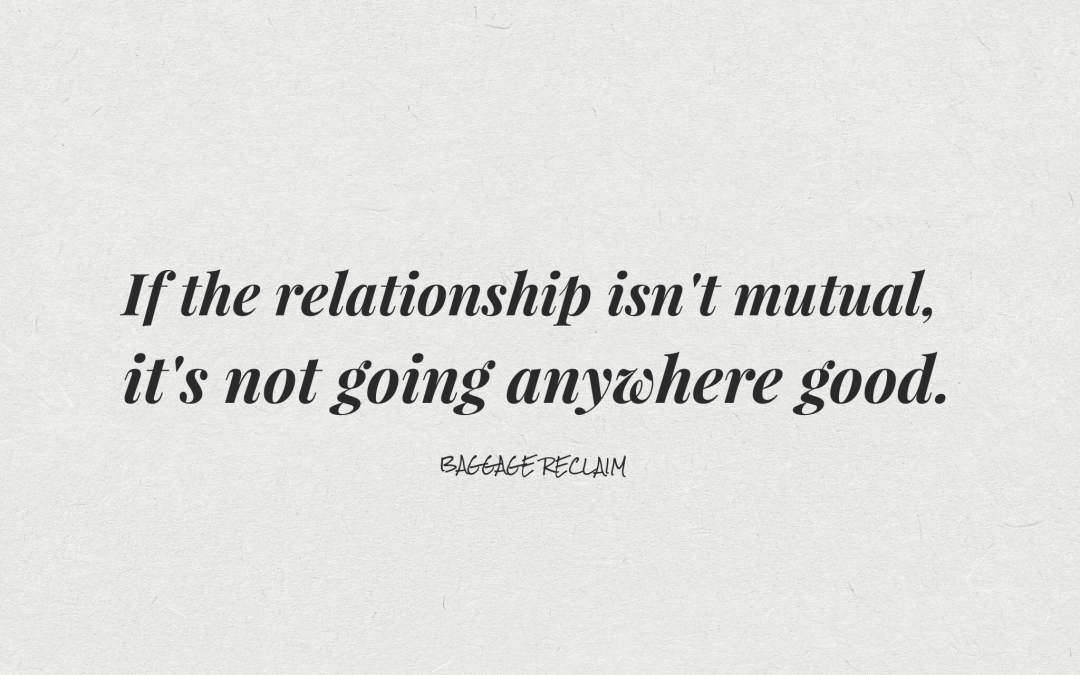 If you’ve ever dealt with somebody who borrows money from you but doesn’t repay it or even asks you for more money, then you not only have an idea of how damn frustrating it is to be guilted by someone who’s messing you around but also what it’s like to be in a casual relationship that you didn’t agree to.

Jane thinks that she and Peter are friends. When he asks to borrow money from her with assurances about how and when he will pay it back, including suggesting that he will pay interest on top, she thinks it’s a no-brainer. They agree that he’ll pay it back each week and at first, this is what happens. At one point, even claimed that he would pay it back earlier all in one go.

But then it becomes every couple of weeks. Then a month and so on, until Jane asks him what’s going on. He waffles on about how busy he’s been and how he’s got a few things going on that he needs the money for. Instead of paying it back as agreed, it’s now going to take longer (and he’s spending the money elsewhere). He tells her that he’d wanted to tell her but was worried about how she would react.

Jane feels uneasy about the arrangement but gives him the benefit of the doubt. She doesn’t want to appear uptight or even endanger the possibility of him paying it back at all.

Peter doesn’t pay her back as agreed, and it drags out. When she puts her foot down about lending him any more money, he says that she’s being impatient. He claims that she’s judging him unfairly. Eventually, she realises that she’s being neither of these things and that she’s been more than fair. Quite simply, she’s just not obliged to continue lending money.

Him, for instance, calling her a “bad friend” for being unwilling to always bail him out financially, is not only unfair and untrue but it neglects to take into account where he is enjoying the benefits of her investment and good nature while only giving the bare minimum in return. It’s a bit like taking out a loan and agreeing to pay that back plus interest but only paying back the interest. Sure, you’re giving something, but it’s not what was agreed.

Peter and Jane go on several dates over the course of a few weeks. He talks about how smitten he is with her and how he can’t wait to introduce her to his family and friends and take her here, there and everywhere. He calls her his girlfriend and agrees that they’re in a relationship. At first, everything seems hunky-dory. Then she notes that there’s a shift in how attentive he is. They’re not really spending much time together since it became ‘official’, leaving her feeling more than a little confused. She made it very clear that she wasn’t in the market for a casual relationship.

Keen to make sure that there isn’t any ambiguity or misunderstanding in their new relationship, she checks in with him to ensure they’re still on the same page. He insists that everything is OK and goes on about how ‘busy’ he is. She tells him that it’s been feeling really casual. Although she’d be disappointed if he’d changed his mind, she’d prefer his honesty. He doubles down on his assurances and over the next couple of weeks, it’s like not-so-old Peter is back. And then things taper off again.

Not wanting to rock the boat and knowing how things ‘improved’ before, she tries to be more relaxed. Only problem is, not much is happening outside of touching base by text and having sex when he decides to be around.

She feels used. Barely four months into the relationship and she calls time on their involvement. He calls her “impatient”, insisting that he had intended to be more available but that her “pressure” had caused him to have second thoughts. Jane doubts herself and worries that she’s scared away a “great guy” and that she’s going to wind up alone if she pushes the issue too much. So she tries again. She notes that Peter has lots of time for other things, just not her. Less than two months later, Peter admits that he’s not ready for a committed relationship. It turns out that this is his pattern.

No, relationships are not financial agreements, but they are a series of micro-commitments.

If one party cannot follow through on what they’ve claimed they’ll be and do in the early stages of a relationship, it’s unlikely that the other will see the projected or desired outcome.

In casual relationships, which are an oxymoron because no one wants or likes to be treated casually, someone always gets shortchanged. It might start out looking like a mutual agreement, but over time it becomes clear that one party is advancing their self-interest while calling it a “mutual” benefit.

But where so-called casual relationships are particularly problematic is where we didn’t agree to be in one in the first place and where the other party keeps making out that our senses are deceiving us. Gaslighting. We then look like a drama queen/king who doesn’t know how to go with the flow’. Suddenly we have trust issues or are demanding/needy. It’s a slippery slope to doubt and insecurity where we worry about having misstepped.

In the relationship scenario with Peter and Jane, it’s not that Peter wasn’t doing anything at all. His attitude and crumbs, though, meant that no real dent could be made into creating a relationship because he wasn’t investing.

Maybe he was waiting for that magic moment where the world would be perfect and he wouldn’t feel afraid of being vulnerable.

Maybe he only wanted to put a little into this relationship because he had a fear of missing out.

Maybe he was waiting for Jane to prove she was worth the investment’ by having her make all of the investment first. This isn’t possible, incidentally, as that’s not a relationship; it’s an audition.

Jane was expected to act like a ‘girlfriend’ even though Peter did not come through as a ‘boyfriend’.

Of course she was bound to feel uneasy and eventually resentful! She was doubting her own judgement and compromising herself so that he could feel OK with the illusion but also so that she would not have to deal with the discomfort of being more boundaried.

When someone says that we’re in a relationship but then behaves otherwise, we do have a right to question that. This is especially when, in some instances, the promises they’ve made effectively amount to obtaining goods by deception (Future Faking). It’s not about us being impatient or needy or whatever else we or they are throwing our way. It’s also not about us trying to ‘micro-manage’ the relationship.

If we agree to enter into a relationship with someone, it’s safe to have the expectation of them not just skimming the sex, ego stroke, shoulder to lean on or any other fringe benefits off the top while leaving out any investment of their true time, energy, effort and emotion that would help to co-create and forge a relationship.

When it becomes evident that they’re not in the same relationship we want to be in, we have a right to opt out. It’s never the right thing to stop listening to yourself in order to prioritise someone else’s feelings and needs. In a mutually fulfilling relationship, you can take care of them and take care of you too.

Guest post: The Drama Blame Game
Florence Nightingale: Why needing to fix/heal/help in the name of love is unhealthy (P1)
Did I chase or scare him away?