Just Because Someone Says Something, It Doesn’t Make It So (Don’t let them use BS to blame you) 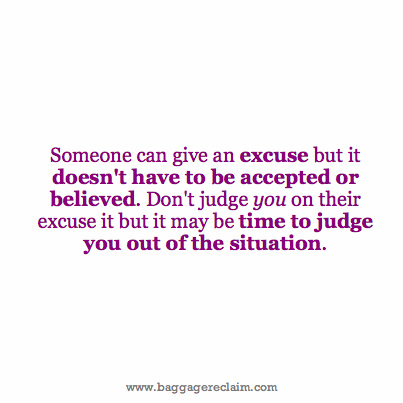 During my childhood, my mother spouted off a number of ‘amusing’ sayings including “Those who can’t hear will feel”, “Don’t fly past your roost”, and the very annoying, “Would you jump off a bridge if someone told you to?” I’m often reminded of the latter when people share what can only be described as their ‘shady stories’ with me where they’re blamed for the other person’s wrongdoings or the fact that their actions failed to match their words. I’ve heard from people who’ve spent years feeling wounded by some bullshit (BS) excuse dressed up as a ‘logical’ reason that was used on them.

Just because someone gives a reason, or should I say excuse for why they’ve done something, it doesn’t make it so.

When you start agreeing with this BS, you’re essentially offloading your own truth, morals, and values in favour of their perspective. They can give a reason / excuse but it doesn’t have to be accepted or believed. You still have your own judgement and nobody should be able to come along and tell you that up is down and have you signing on to their perspective. If you’ll question the hell out of your existence with each thing that someone says, you’ll be in an emotional hell which is all the more reason why you can take protective cover by having a reasonable level of self-esteem.

Of course there are some people out there who over a period of time with what can only be described as mind effery, they manage to weasel their way into your psyche with their chop-chop-chopping and they drain you of your strength so that you don’t really have anything left to fight back with or leave. You end up believing them because when they made their first ‘chip’, it created an opening for them to say and do more things to mess with your head where you essentially end up doubting you.

Aside from very unpleasant abusive folk, who incidentally tend to sneak up on you because they’re not likely to roll out their true selves immediately otherwise you’d bolt, there are people who just basically have Very Dodgy Reasoning because they don’t tend to take responsibility and accountability for their own actions and they also have a Very Dodgy Perspective to base the reasoning on. They may very well believe it because they may have a rather convoluted framework of reality and truth that they’re working off. They believe certain things and as we’ve all discovered, when we believe something, we find all sorts of ways to legitimise that perspective even if there’s plenty of other evidence out there that highlights an alternative and disputes this indisputable truth attitude that we may be going around with.

It’s not about them being a ‘bad person’; it means you’re incompatible because on the personal values front, which is about character and essentially who you are as a person including your morals, you clash.

Just because someone says something, it doesn’t make it so.

We are all living in our own realities and we feel at our most ‘harmonious’ around people who share similar values and outlooks. What we think, how we feel, and what we do, ultimately shapes our outlook, our perspective and also whether or not we’re going to buy into BS in the first place.

Some people are very acclimatised to very high levels of drama and chaotic lives. I used to have a very high tolerance for BS making it easy for me to be the high absorbency blame kitchen roll in people’s lives because I was used to being around people who had an attitude of, “If I said or did something wrong it’s because you made me”.

We’re just not that powerful. If you’re operating under the misconception that you’ve ‘provoked’ a good Samaritan into behaviour that would have me slamming down a gavel saying “This is an open and shut case of assholery, judgement in favour of the plaintiff” you really are thinking that you’re that powerful.

Don’t perpetuate this pervasive tendency in society of judging you or others for someone else’s wrongdoing. We live in a time when people commit crimes and we’re judging the victims. We wonder what they forgot to do, or question why they were dressed a certain way, or poke into their background as if this lessens the responsibility of the criminal while burdening the victim.

Funny enough, when people tell me about how they’ve been beating themselves up for weeks, months, years or even decades over some BS justification that they were clobbered with and I ask, “Do you believe that it’s someone’s fault if they’re beaten, raped, or cheated on?”, they’re horrified and immediately and emphatically say NO, so it’s time to ask ourselves why we think it’s OK to accept BS reasoning for boundary busting behaviour?

You might think that yours are ‘different’, more ‘provoke-able’, or ‘lesser’ problems than beating, cheating and rape, but the thing is that buying into BS paves the way to more of it so that when you develop a tendency for listening to dodgy reasoning, when something really big happens, you will blame you for it too. You will also find that all of the ‘small’ and ‘medium’ sized things that you assign you the responsibility of gradually build up and you end up fatigued.

Be careful: the reasoning that you accept or apply to others can inadvertently communicate the wrong messages about you and distort your own values.

Accepting bullshit excuses that put the blame on you for the wrongdoings of others to justify their even more bullshit behaviour is to suggest that you believe that other people’s shady and even assholic behaviour is ‘acceptable’ or at least justifiable if it’s ‘provoked’ by a person’s worth or some sort of failure on their part.

Would you treat someone without love, care, trust, and respect and then blame them for it and even throw them a BS excuse to justify your actions? If you wouldn’t, don’t BS yourself any further by going against your own values and buying into someone else’s dodgy reasoning.

Advice: Is he cheating? Am I being naive?
It's not about blaming yourself with emotionally unavailable men
When Someone Thinks That It's Okay To Keep Disappointing You ... But Not Others. Er… No It's Not