Keeping It Real About Online Dating – The People Supermarket 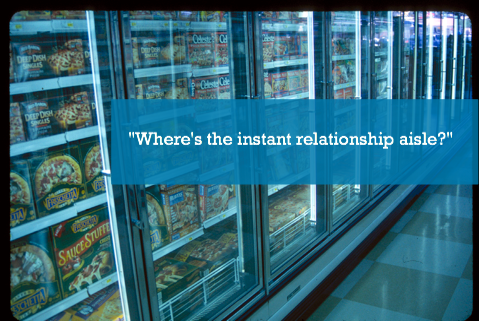 Between readers, friends, and family, I know a lot of people who are using dating sites, and aside from the whole coming up against the Cough Up A Shag Or The Dates That Weren’t Going To Materialise Anyway WIll Dry Up issue, it can be hard to deal with what feels like ‘rejection’ or ‘passing rejection’ and feeling ‘unattractive’ as well as the frustration of not meeting the type of people you feel that you ‘should’ meet.

One reader for instance, felt a bit bruised by the realisation that her profile had been looked at over ten thousand times since she’d been on the site. Now I don’t think she expected all ten thousand to get in touch, but she was disappointed that ‘only’ just over a hundred had. I’ve also heard a lot of stories of people finding people who match their ‘requirements’ who they cannot forge a relationship with.

I’ve said it before and I’ll say it again: Online dating isn’t for the faint hearted or those without a reasonable level of self-esteem, some Columbo skills and their feet firmly in reality. If you use online dating to collect attention to bolster your wavering self-esteem, to avoid ‘rejection rejection’ in the real world because you feel ‘safer’ at home, and find it easy to feel connected to someone by seeing a few things that you like, you’ll get your virtual tippy tapping fingers burned.

From behind a screen or mobile device, you can browse the aisles and filter by your whims and shopping list of requirements. The computer says that you can search this way so now it’s as if we seem to think that if the computer says YES, then no matter how convoluted and contradictory some of the things we want may be, or how someone may be good on virtual paper but not in reality, we expect what we want and expect to materialise.

People browse dating sites to pass time, to look for their next Fast Forwarding opportunity (it could be hours, a day, several days, weeks, or even months) and yes to look for a relationship. Let me assure you – I’ve read and heard enough horror stories to know that while the profile provides you with some information, you won’t know what someone wants and who they are until you’ve experienced them over time. There’s no point going “But they said…”. It’s like when you have a person’s resume / CV – you’ve got to do the due diligence. You’re not going to give a job based on CV alone!

People unfold. Yes, even virtual ones.

The likelihood is that if someone’s skimming through lots of profiles, they’ll likely click when something catches their eye. They might click through on the profile, see something that does or doesn’t resonate and either respond or move on. The key is not to read any great meaning into a click or a wink or a message. It’s an expression of potential interest just like when someone asks for your number, it’s not a contract or an automatic precursor to love.

In ‘olden times’, you had to leave your house, or be set up, look in the back of the newspaper/magazine or use a dating agency. Now, if you’re married and enjoy dogging (getting laid in car parks I’m told) and want to meet someone behind your spouses back, you can locate someone with a few clicks. Or you can just pretend to be single… If you want to exaggerate who you are, you’re free to do as you like. If you want to showboat like there’s a relationship on offer and keep it to emails, sexts, texts and a bit of Skyping, you can find someone who is used to crumbs of attention and you can have them there as your backup ‘relationship’ (albeit a fantasy one) while you have other relationships.

On dating sites, there’s no ‘judgment’ from your family and peers about being superficial, or selecting a financial bracket, or choosing them because they’re holding a cat while two kids hover nearby. You can make a thousand assumptions about the person before you’ve even met. If they look how you want them to look and you’re sold on words and imagery, you may be excited and full of hope based on reading a profile.

Some people will roam the ‘aisles’, browsing aimlessly and possibly reaching out and collecting attention aimlessly. Let’s be real, whether it’s on or offline, a lot of people 1) don’t know what they want or 2) think that they do but then realise later that they want different or that they don’t know or 3) overestimate their capacity for a relationship or 4) just don’t know how to be ‘alone’.

Some will head straight to a particular aisle and narrow down their search and then read a few profiles and possibly select one or several to reach out to, possibly to increase their ‘hit rate’. Really, their reasons could be anything which is why there’s no point trying to get in their mind. I looked at several tomato ketchups recently. I chose an organic glass bottled one with a nice label. There’s nothing to say that it was going to taste great or that in those few moments that I made a judgment about any of the others. I just chose a ketchup based on my tastes at that moment.

Really, someone not clicking on your profile or reaching out isn’t a ‘judgment’ of you. If they’ve got to narrow their options, where is the judgment in that? It doesn’t mean that you’re ‘unattractive’. It’s not the dating version of X-Factor.

You have to treat online dating the way that any company or brand with an email newsletter list has to. They’re not going to send an email newsletter and expect every single person to open it, read, click and respond. In fact, the industry rate is 1-2%. Obviously there are things that can be done to optimise these ‘campaigns’ and increase interaction but with regards to online dating, people’s responses to imagery, words, and filters can be a tad unpredictable. You can ensure that you have a well written profile with a good (truthful but flattering) picture that you’re specific in what you’re looking for and that you in turn focus your search on people who have similar profiles and are values focused, but until you meet in reality, you have to reserve judgement and reign in your libido and imagination. Really.

People can use words and photographs to portray themselves and their lives in any way that they like. We’ve been subjected to this with advertising for many years so we really shouldn’t be that surprised that it happens on dating sites. They’re there to ‘showcase’ ‘single’ (depending on what type of site it is) humans and facilitate ‘connections’ and ‘introductions’ but now that sites are so prolific and the barrier to entry is so low, you have to expect that it will take time and reality.

It doesn’t matter whether it’s on or offline, you still have to take your time and go through the discovery phase.

However the whole virtual aspect means that you have to do more ‘balancing’ of the imagination books because your job is to reconcile preconceptions based on initial virtual interactions with your actual experience of that person. If there’s too much imagination and words and not enough human contact, you may become invested in something and someone that doesn’t exist.

Basically you have to keep it real about getting virtual and accept that if you’re going to use dating sites, you’ll have to ‘work through’ a lot more people and dates as well as accepting that the superficial element, the browsing etc come with the territory. You have to accept that it will take time and that it’s not an instant result. You probably need to accept that you’ll come across someone that misrepresents themselves and you just have to flush hard when you recognise it. Take it as a given that you’ll meet people sniffing around for sex. If you struggle with disappointment and rejection, steer clear. You also have to keep assumptions to an absolute minimum other than if they act shady and have contradictory information or behaviour, FLUSH. Hard. Don’t forget: People still meet face-to-face.

PS Does anyone else find it fascinating that so many people use the filters yet many don’t use it for distance?

The Dreamer & the Shopper: Have you inadvertently found yourself in a fantasy relationship?
Guest Post - Dating Games: The Pushey Pulley Game
Afraid of online dating? Here are 12 tips to get you started (or back into it)