Knowing When To Bail Out – Red Flags 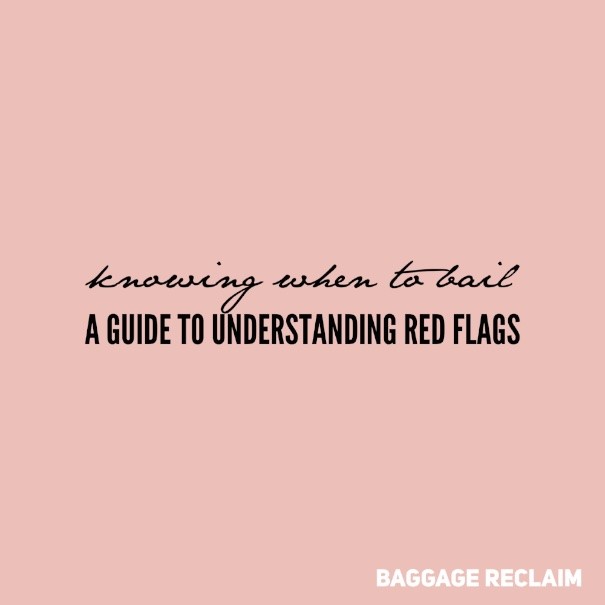 While that thing we refer to as dating is for having fun and getting to know each other, it’s also the key period where you need to notice those red flags that if ignored, will catch up with you further down the road in your relationship and cause you much pain. People have a nasty habit of wearing rose-tinted glasses when they date someone and witness various red flags which they fail to acknowledge and act upon. If we want to have more successful relationships and minimise some of the pain we suffer in pursuit of love, we must learn to be more aware and pay attention to the red flags. If there’s red flag issues, there will be early indicators…we just need to be listening and watching.  It’s important to note that we all make a massive effort when we first meet someone but that ultimately we can’t help but slip into our natural selves within the first few dates, plus we can’t control situations and life, which means we get put to the test and inadvertently reveal our true selves.

What is a red flag?

This is something that the other party does which flags a potential problem either then or further down the line. Often ‘red flags’ are a character trait, for example aggression, and at other times it’s a fundamental core difference in values, indicating something that’s extremely important to you that you really shouldn’t and cannot ignore.

Red flags can and often will deal a fatal blow to the relationship. Ignoring these gives the person a lifeline to expand upon these issues and the damage that can be dealt with this lifeline may have long lasting repercussions.

The key with a red flag is that whatever it is, it’s something that alerts you to other potential issues or that normally you would be wary or not accepting of. They are normally things that you don’t want to compromise on.

We ignore red flags because:

In your mind, as part of the natural process of life and certainly because you want to have a decent mate to have a relationship with, there need to be certain predefined things that you know that you will not accept, regardless of how fabulous he/she is, or that will cause you to pause things and question the problem to clear up the red flag.

Our inability to ask the right questions or even ask any questions at all is the very thing that is coming back to bite us further down when the person is acting out these behaviours and we feel bewildered.

If they have trouble keeping it in check, they’re irrational, violent, and a bit too handy with their fists, be careful that you don’t end up being a human punchbag or being emotionally abused.

This is someone who is incapable of sharing anything of themselves emotionally because they are all about limiting their exposure to vulnerability and doing things on their terms, making them rather self-absorbed. If they’re emotionally unavailable, they cannot be truly intimate which means that they cannot commit, which means your relationship is going to halt, or go in fits and starts, and ultimately it’s not really going to go anywhere because it will always have a cap on it.

Pay attention to people who don’t know what to do with themselves if they don’t get their ‘medicine’. Some of these will never be satisfied. Also unhealthy attitudes in the bedroom do spill over into other areas of your life and will leave you feeling very insecure.

Are they incapable of doing much for themselves because they haven’t grown up? Is he/she irresponsible with life in general – bills, rent, job and borrows money off you? Is he/she reckless?

If you meet someone and they are addicted to something and not aware of it and doing something about it, this will impact on your life greatly if you continue on. See more on code amber and red issues.

Run like the wind from anyone that wants to control you. It won’t let up and the longer you’re with them, the more entrenched they become in your life, is the worse they’ll get, often using criticism as a chief way of getting at you. Watch your self esteem walk out the door. See more on The Chopper and Unpleasables.

They play the victim

Be careful of anyone that refuses to take any responsibility for their life and blames it on others. You will eventually become one of those ‘others’. People who play the victim and refuse to see their own part to play in things make very problematic partners.


Not over the ex

Not over their ex, not ready for you. Plain and simple.

Unfortunately things happen in life and it can be difficult getting over things and dealing with them. Some things have a very lasting effect on people and can impact hugely on future relationships. They of course can be overcome, but failure to acknowledge these issues in the first place and openly deal with them will cause big problems.

I am always wary of people who don’t have a good thing to say about anyone and begrudge people their success and revel in their failures. I don’t think it’s the fabric of a good strong character and it’s something to keep an eye on. Mean-spirited people don’t stop being so in a relationship and may attack your self-esteem by latching on to what they think are flaws in you. Check out The Chopper.

Now how much of a blow these red flags deal to your relationship is down to you. You must decide on what is and isn’t acceptable and stick to it, and of course follow your gut. One of the things that allows people with some of these red flags to ‘prosper’ and to continue as normal is acceptance of the behaviour as is, with rarely any questions asked. If you have someone with any of the above, raise the issue with them, or if it’s serious enough, bail out and don’t look back.

For a more insight into red flags, please check out my post on code amber and red behaviour and problems.

We can express our anger and frustration at work *without* being intimidating
Dealing With..Asking Guy's Out...and No...You Don't Need To Do It Because You Think He's Shy
'Time' isn't the only factor when considering dating a separated or recently divorced person