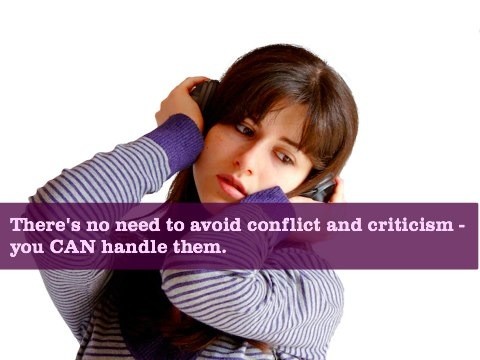 If you’ve found yourself associating conflict and criticism with rejection and have compromised yourself in unhealthy relationships as a result of avoiding experiencing them (or reacting poorly), I share my thoughts on changing the meaning of criticism and conflict in this adapted excerpt from my new ebook, The Dreamer and the Fantasy Relationship…

You receive ‘feedback’, both positive and negative, not just verbally or through people’s actions, but from life itself. When you keep experiencing the same situations, it’s life throwing up the same lessons until you learn them. It may seem like ‘negative’ feedback initially because you may experience what appears to be an unfavourable result, but it then paves the way to positive feedback through the subsequent results and lessons learned.

You can only learn to handle criticism and feedback with reality, which gives perspective.

Change the meaning of criticism from “I’m not good enough” or “I’m a failure” to “Someone is asking me to listen …” If you don’t, you’ll focus on bathing in a sense of inadequacy and withdraw into yourself.

Listening doesn’t mean agreement and criticism doesn’t equate to “I must change to stop disapproval”.

Sometimes, in fact often, what you perceive as a potential conflict really isn’t. It’s important to calm down and not let yourself get carried away with what you think that the other person is thinking or overinvesting your time and energy into formulating a response or even a ‘defence’.

Even if feedback is negative, if you can look beyond your nose and recognise the lesson, whether it’s from the feedback itself or what receiving it means about the person/situation, you only stand to gain.

Criticism isn’t the same as disapproval of you as a person or rejection. Listen to the feedback. Is it actually a message saying that you are a ‘less than’ person? Or is that how you see it?

Let this idea go that experiencing conflict is a sign that you’ve done something ‘wrong’. It could easily be the other person, or both of you, having a misunderstanding, or something of nothing. You don’t get to know this if you’re already going “Wah wah wah it’s me!”

Criticism and conflict also doesn’t mean that a relationship is over or on the way to being so. Part of being a mature adult in a relationship is being able to have a disagreement or not always hear what you want to hear, and not put the relationship in jeopardy each time. You’re then both free to be available and truly intimate with one another.

Someone’s criticism isn’t always accurate or the right thing for you. You can listen to it, let it percolate, consider the suggestions and look at where it fits with your agenda and your values, and then choose a course of action that’s right for you.

Let me assure you: any form of ‘feedback’ that involves you screwing yourself over while busting up your boundaries and values is not in your best interests.

Criticism or feedback is not an opportunity to be disrespectful or even abusive. It’s not a free pass on decency. When done in a mean-spirited or abusive manner, it’s their character.

“Who are you to judge?” should help you work out in your mind whether the person is qualified to critique you. If they are someone who has consistently treated you with care, trust, and respect, or a customer, or you know there’s a genuine basis for the criticism, hear them out.

If they are someone who claims to be trying to help you and being ‘honest’, while being dishonest about their own part or even deluded about who they are, they are not qualified to be telling you who you are or giving you improvements tips.

Accept that you cannot like or love ‘everything’, just like you cannot be liked and loved by ‘everyone’. If you have this burning desire to gain someone’s approval, question it. What do you think you’re going to experience?

Even when you do express actual disapproval or they do, it’s not the end of life as you know it. Whatever the disapproval is, it doesn’t put a final judgement on someone. What it may do is show a difference in values, which means you’re incompatible. Buh-bye!

When you refuse to accept feedback and yes, at times, criticism, you’re saying “I have nothing to learn” and “You cannot say anything that I don’t like because you’ll upset me.” No relationship of any kind, romantic or otherwise, can progress even an inch without the room for respectful feedback and at times, yes, criticism.

When you accept that you can and will experience it, you can prepare positively for it, by having the self-esteem and perspective to take it.

Don’t react immediately. One of the first things you’ll learn by not having an instant reaction and running with it, is that the sky doesn’t fall down and whatever you think that the worst is, isn’t happening. Don’t reply (if you’re face to face) until you’ve taken a few breaths, relaxed into yourself and feel a bit more balanced. Definitely don’t fire off texts or emails in anger.

If you immediately react angrily or defensively, you’ll likely end up feeling regretful and then believing that the criticism or manner of conflict was justified even if it wasn’t. You’ll then focus on your reaction and making amends for that, instead of the issue at hand.

Someone who adds value to your life, will bite the bullet and say the necessary and the uncomfortable because they want to see you succeed. You’ll also find that someone who is genuinely offering you feedback, isn’t basing the need to or desired outcome on something to do with them.

Make sure you manage your ‘frequencies’ and ‘filters’. Short of running off every time you sense criticism, you will have to experience and handle it. How much of a negative impact it makes on you, and what you stand to gain (if anything), is greatly altered by ensuring that you know who to tune into and who to filter out their crap.?

Just because someone does give you feedback though, it doesn’t mean that you have to implement it. It’s feedback, not a directive or a court order.

When you deem that someone disapproves of you, whether it’s because they’re not interested, or they make a criticism, or they don’t want the relationship that you want, that doesn’t mean that you are unacceptable. They’re just one person, who I must point out again, are just not that special.

Sometimes criticism really isn’t about you, which of course is weird to hear when it appears to be directed at you. Sometimes when people lash out, it’s also about their own circumstances, especially when you realise that their reaction is so disproportionate to the matter at hand, it sure as hell isn’t all about you.

People see things from their perspective. Many people when they express concern, opinions, and criticism about you or your life, are not thinking about you; they’re either thinking about what they would be like under the same circumstances or are objecting to your actions inconveniencing them.

Sometimes criticism means “Please stop making it difficult for me to eff around with you and do things on my terms.”

Is there any truth in the criticism? What is it that you don’t like about it? You don’t have to accept a criticism in its entirety, but if you do recognise the truth, don’t ignore it.

It’s OK to compromise, which is finding a solution that you can both live with, but this is very different to compromising yourself by sacrificing your boundaries and values. Make sure that you recognise the difference.

You’re not a child anymore, so make sure that you look at criticism and conflict through adult eyes and adjust your perspective. Now that you’re an adult, how would you teach a child how to cope with not always hearing what they want to or dealing with conflict? Now pass some of that advice on to you.

Own your right to express disapproval and to deal with or even instigate conflict, and you will respect the right of people to express their disapproval or to instigate their own conflict. You don’t have to like it and neither do they, but this is better than feeling victimised when you silence yourself or go against you.

Mindfulness In Relationships: Reduce The Worrying & Fantasising By Getting Back Into The Present
Some people just love trying to come up smelling of roses even when they leave you for someone else
Advice Wednesday: How Do I Begin To Make Sense of Being Catfished?