Acknowledge your blind spots around compatibility 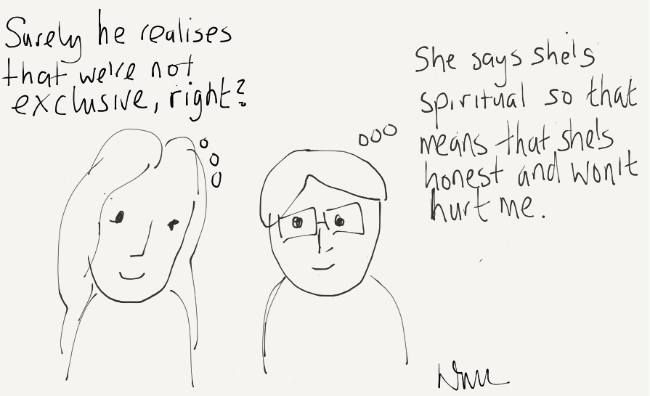 Have you ever felt as if someone was going to be or do certain things only to be surprised about how far off base you are? While this may have come about due to proclamations and promises on their part, if your hopes and expectations stemmed from your own vision of things, you have an understanding of what it feels like to be caught out by assumptions. It can feel as if you’ve been in your own version of Inception – a dream within a dream within another dream. You can struggle to get a sense of what was real and what was fake.

Why can’t they go back to being the person I thought they were in the beginning?, is one of the most popular questions on Baggage Reclaim. We don’t like when people do a U-turn on what they put across or the picture we painted in our mind.

When you delve into why we choose particular partners for a relationship or why we have the expectations that we do of somebody, it becomes clear that in dating and relationships we make a hell of a lot of assumptions based on how things look, how we’d like things to be, and what can be some pretty dodgy beliefs about what we believe makes a person valuable and attractive. We cloak ourselves in illusions and then feel deeply pained, confused and disillusioned when we have to come back to earth and deal with issues that cannot be ignored against the backdrop of the reality of what we’re experiencing. These assumptions have kept many a relationship spinning its wheels while leaving one or both partners feeling short-changed.

Assumptions are beliefs that you accept as true without proof.

Think about that for a moment and you can already see why this may be a big ‘ole problem – do you really want to be making what may be one of the biggest decisions you will ever make (potentially finding a life partner or certainly a long-term partner to share a relationship with) based on unsubstantiated assumptions? Don’t you need proof before you go getting your feet well and truly under the relationship table?

Do you really want to be making what may be one of the biggest decisions you will ever make (potentially finding a life partner or certainly a long-term partner to share a relationship with) based on unsubstantiated assumptions?

These and more, not only represent common assumptions but they also represent common problems in compatibility. If you have been caught out by these, you have a blind spot. Not only is your view being obstructed but the understanding and knowledge gap causes a great deal of pain.

When you acknowledge the existence of blind spots when driving, you can prepare for that by slowing down and being vigilant. The assumptions that you make around compatibility, especially when you continue with them in spite of compelling reasons (experiences) that tell you to adapt your response and open up awareness and understanding, is treating a blind spot as if it isn’t and then wondering why you keep using the same assumption maps and taking the same routes and winding up at the same unwanted destination– a less than mutually fulfilling relationship with love, care, trust and respect.

If you keep using the same thinking that got you into the previous problematic and incompatible relationship, you will keep choosing variations of the same people in different packages and then wondering why you’re getting burned– relationship insanity.

People unfold and the truth of who people are lies in actions and consistency, not assumptions or proclamations.

To transcend previous relationship experiences, get your assumptions out on the proverbial table and acknowledge where you’re tripping you up. It’s also a good time to ask why you’re so attached to the assumptions. What value do they hold for you?

It’s easy to get caught up in the whole, “Oooh, but that will make me ‘wrong’ if I acknowledge these”, but you either want to be happy or you want to keep insisting that you’re “right” while feeling miserable and taking part in your own Groundhog Day.

Sometimes an assumption exists because it’s one that’s been made since you were a child or it represents an important figure in your life, hence why I have so many BR readers who make the above assumptions because their parent was ‘like this’ and they’re still looking for validation. In many instances, they actually know that the assumption isn’t even true for the person who it’s based on but to acknowledge this leaves them feeling disloyal and even trips on old wounds. Even if the assumption is true for that one person, it doesn’t mean that they have a load of clones out there.

It’s also important to recognise that even if you think that you’re certain things because you claim to be or do something, it doesn’t mean that if you meet somebody that claims or does the same, that you are the same.

We can share commonalities with a person and express them very differently.

The truth shall set you free though because you can get grounded by being conscious, aware and present in your relationships as opposed to using the signal of assumptions to go into autopilot (an unhealthy pattern). It’s also much easier to truly get to know a person and address any issues that come up because there isn’t that awkwardness that arises when you feel peeved that they’re not living up to the assumption that you made about [whatever they told or initially showed you] and then either feeling confused and that you cannot address it (because they didn’t actually say that they were what you assumed), or feeling frustrated when they won’t acknowledge what’s so funky about them not embodying the values that are representative of what they claim.

Sometimes, a person just isn’t who you thought they were or would be. That’s not necessarily ‘bad’ judgement and more, life unfolding so that you can do a spot of mental reconciliation and adjust.

It’s not that you will never make assumptions again – we all do it to save time with our habits – but there is no need to use guesswork when a person is showing you who they are and you’re engaging with them, not just interacting with the hologram of what you assume that they ‘should’ be.

Podcast Ep. 34: Charm & Disarm, What's Your Money Story?, Single, WHAT?!
Quiz: Are You Making These Common Dating and Relationships Assumptions?
Revisited: Understanding what your trust points were in your shady relationship