Listening to myself – time for a summer break! 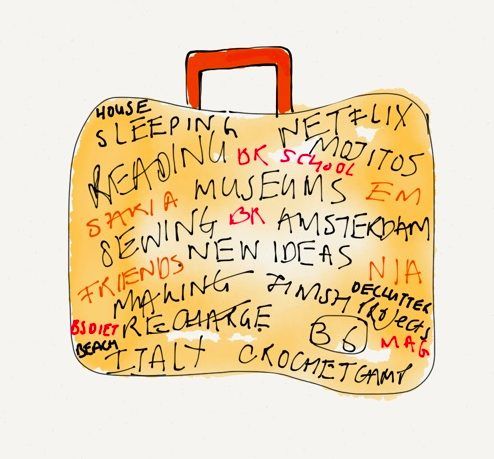 I’m very much a firm believer that life keeps throwing you lessons and signs until you heed them. I’ve been in variations of the same situation in the past and have learned to start questioning whether there’s something different that I need to be doing. This isn’t so that I can change other people’s behaviour (waste of frickin time) but more so that I don’t create unnecessary pain for myself by ignoring my own habits of thinking and behaviour, and that I ultimately continue to grow. Things pop into my head. In fact messages pop into my head, like when I had tinnitus and vertigo a couple of years back and from time to time the thought, Do I need to listen to myself and destress? would zoom by my mind like Roadrunner. Meep meep. Turned out that I did.

Since then, the occasional bouts of tinnitus have become my little nagging friend. Tinnitus has taught me to practice being mindful. If it’s ticking, focusing or paying attention to what appears to be a passing thought – but is actually important and needs my attention – seems to quieten it. When I get loud rushing tinnitus like crackling, water rushing through my ear and vague dizziness, it’s a sign that I’m overtired, overdoing it and need to halt. This is when I should see Whoopi Goldberg’s character in Ghost, Oda Mae Brown, saying, Natalie, you in danger girl.

I’ve known for months that I need to take a break. I do take breaks and wind down somewhat when the kids are on holiday but I’ve basically been writing new ‘material’ for BR most weeks even through a maternity leave and a wedding – I can’t believe it’s already over a year since we got married!

Anyway, the message of needing a break has got louder and louder and life has thrown me various signs and then in the past few days, it’s just loaded them up one after another. I need to step back and know my own boundaries.

It’s always important to remember that we can always gripe about how people ‘should’ know better than to do such and such but we do often have to examine where we’re busting our own boundaries.

Prime example: if I don’t want to be stressing about something at dinner time or just before the kids bedtime, it would probably help if I wasn’t looking at email at that time in the first place…

Yesterday morning I experienced a Oh HELLLLLL No moment before it was even 7am and then I got a couple of texts that changed the plan for the morning and this was all before 7.30am. My life is so drama free in comparison to the me of old pre BR days that when I find myself experiencing similar types of OH HELL NO within a matter of hours and all about similar things, I have to cut the BS.

I am not superwoman. For any of you out there that are trying to be all things to all people or stretching yourself to the limit, don’t BS yourself into all sorts of stress. I’ll load myself up periodically but I know when I’m going too far and when I need to come back to base. That time is now.

I’m not superwoman and you’re not superhuman. People will ask or expect things of you, but you know what? You’re under no obligation. They can ask, but you’re free to say yay, nay, or ‘Let me come back to you on that one’.

The sky will not fall down. I promise you. I guarantee it.

Sometimes we get too caught up in worrying too much about what somebody else might think, feel or do if we don’t do or say something. Our imaginations exceed what will actually happen 95% of the time. We have to be careful with our self-esteem fish tank where we may overfeed the fear, insecurity and worry fish, who are greedy and don’t know when they’re full and forget to feed our self-esteem.

So in this last summer of having a preschooler (Nia graduated from preschool today), I’m going to take a break until September when BR will be turning 8 years old. What does that mean? BR will still be updated but I will be primarily putting out some of your favourite posts that are buried in the archives as well as the annual birthday post – I can’t believe I’m 36 next week! Facebook (and Twitter) will still be updated with bursts of inspiration.

I say I’m going to be on a break but with both girls on holiday and oodles of things to do, it’s going to be a busy but relaxing break.

But ultimately, I’m going to give me permission to chill and know myself before I wreck myself.

Have a great weekend and ‘see’ you over the summer!

PPS Before anyone asks, yes of course comments will still be being approved so don’t panic! And the shop is still open so queries and orders will go out as normal.