Maybe I Can Do Better… Are You a Dating & Relationship ‘Surfer’? 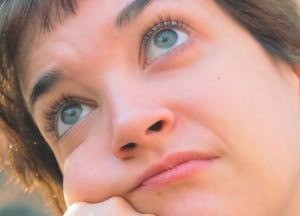 This past weekend while I was in New York, I got talking to a guy while waiting to go to the bathroom. He’d spotted that we were tourists because we had shopping bags before 1pm on a Saturday (OK…) and we ended up filling him in on our trip. My friend asked him for suggestions about good spots for meeting single guys and after telling us that he and all of his friends were gay, he repeated what I’ve heard many times – that it’s very hard to meet guys and in fact, male or female, it’s difficult to lock down a relationship.

“If you want something for one night or a fling, it’s easy to meet people. Something more..” and he shrugged his shoulders helplessly. I asked him why he thought this was. “Because everybody thinks that they can do better. They think they can find someone better looking or who has more money or whatever.”

Of course New Yorkers aren’t the only people who might be thinking that they can do better. I hear from many people who are scared to be absolute in promising themselves to a person (committing) because they worry that if they say that this is it, that out there might be a better opportunity and then they’ll be kicking themselves, even though if they were genuinely committed to someone, they fail to realise that they wouldn’t be looking around because they’d be too busy with the person they’re with. It’s not like that summer jumpsuit that I found in the Anthropologie sale room in Houston, Texas last summer that I I hemmed and hawed about and then kicked myself for not snapping it up because I didn’t find it another store. It’s a person, not an object.

Wondering if you can do better all the time, is a bit like when you sit down to watch TV but instead of choosing a programme, watching it and engaging in it, you spend the time surfing around on the off chance that there’s something better to watch.

It’s like you hate the idea that you might have missed out on viewing something better that would have left you as satisfied as you expect. Next thing the whole evening has gone by and you’ve not really watched anything. Then you think, Ah…I should have watched X…” something that you skipped over earlier and then you end up feeling dissatisfied about not choosing that as well.

I’ve had many dating and relationship ‘surfers’ get in touch with me. They’ve spent their time worrying about making a wrong move and thinking, Maybe I can do better, and they haven’t really got anything to show for it, except for instead of being perennially dissatisfied with whether they can do better, they now feel dissatisfied with being dissatisfied, plus they become regretful and may even convince themselves that one of these people was ‘The One’. Throw in checking up on them on Facebook and cue envying the One That Got Away But Not Really.

The trouble with being perennially dissatisfied and shopping around for a better deal, is that not only does it get far too superficial but you’re just never really in anything to have truly enjoyed it.

Ever tried to have a conversation with someone or do something where your mind is elsewhere, or you’re constantly looking over your shoulder, or evaluating and analysing things? Your mind isn’t where it’s supposed to be – in the present.

It’s thinking, I need to know if this is IT and whether they’ll be perfect until the end of time. I need assurances that I’ll always feel satisfied. In fact I don’t want to be just satisfied – I think I should have the fairytale.

Not going to happen. You’re a big part of you being satisfied.

Sometimes you don’t know what you’re going to enjoy. The TV channel surfer may be holding themselves to the gold standard of one particular show and thinking that they have to achieve that exact experience in another show. They might watch something entirely different and thoroughly enjoy it. The same thing is going to happen if you have a ‘type’, especially as it’s likely to be a toxic type (one you’ve yet to have a successful relationship with but you insist it’s what you need) or if you’re holding people to an ‘ex standard’ – er… your ex is an ex for a reason! They’re just not that special, nor are they the only type of person you can be with.

And before anyone suggests it, no it’s not about settling. I actually really would love it if the other camp Maybe this is as good as it gets… (a whole other post) would actually consider and act upon striving to do better.

If you’re going to strive to do better, at least strive to be in a healthier relationship though.

Striving to be with someone with bigger breasts, or more hair, or who has more money, more status, who gives you eight orgasms a week instead of five isn’t really going to lead to relationship satisfaction. No doubt when you do find these things, you start wondering if you can improve upon these too. Surfing around, collecting attention online and with multiple dating, and dipping in our pinky toe is making some people numb to forging genuine relationships.

Of course it’s all about decision making which is about commitment – some people aim for a No Decisions Lifestyle because they fear making a mistake.

They keep looking to the future and fear making a decision that will lead to one possible ‘scary’ outcome even though they’re often only focusing on one and not considering others. In the meantime, they lack an appreciation for the present and miss out. That and that future they keep considering and stalling decisions about, catches up with them and becomes the present, and then they dodge that too. Or end up feeling full of regret.

If you’re asking yourself if you can do better than a relationship that isn’t mutually fulfilling and lacks love, care, trust, and respect as well as shared values and other landmarks? Yeah you can.

If you’re asking if you can do better and find someone who is more satisfying on secondary values like appearance, or how much money they have, or how much more IQ they can have, or whatever, you might want to consider whether it’s time to look a bit deeper and make sure you’re actually living your life congruent with your values and seeking partners who you can actually forge a future with.

Dating is a discovery phase. No you might not have ended up with the people who you’ve cast aside for what on reflection may seem silly reasons or certainly not the life or death you thought they were back then, but each dating experience is actually an opportunity to positively learn about what you would like to find in another person and even understanding yourself (your values). If you never discover because you’re too busy scoping out the market and being dissatisfied, how can you truly evaluate something?

Surfing through dating and relationships will leave you at a loss. Be satisfied with and value you, so that you can relax into your interactions instead of looking over your shoulder. This also means that whether you opt in or you opt out, you do it for the right reasons for you, then you always know that you did the best you could under the circumstances at the time and have little to regret.

Just remember, unless there’s danger, there is no harm with choosing a ‘channel’ for a while and letting the ‘programme’ unfold. You may just surprise yourself and enjoy it.