Excerpt from Mr Unavailable and the Fallback Girl 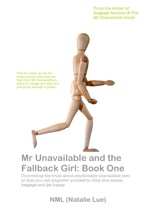 Mr Unavailableâ€™s ability to perceive himself as Mr Wonderful when heâ€™s really Mr Nightmare is the key driver of this walking, talking, contradiction. When I finished it with one particular Mr Unavailable, I tersely posed the question ‘What is it about me that makes you think that I’m the woman that will be OK with some crap arrangement like this?’ He was totally flustered and told me about how much he liked me and bla, bla, bla, but what became very clear is that ‘thinking’ is a rare occurrence with emotionally unavailable men as they are too self absorbed to see the wood for the trees. They are totally disconnected from their behaviour, which means that they donâ€™t connect the dots and draw a negative conclusion. You have to remember that his man has an inability to access his emotions in a healthy way. But often, these men have no clue because they know no different, or their egos tell them that because they arenâ€™t wife beaters or criminals, they are great catches.

The trouble with him is that heâ€™s not quite enough of a bastard to be thrown in the Bad Boy camp and his charms let you think he has Nice Boy ways about him, but in many respects he is more dangerous than the average Bad Boy because the contradictions mislead you. At the end of the day, serial killers can have some â€˜niceâ€™ qualities but you wouldnâ€™t want to go out with them now, would you?

â€œIf itâ€™s something that will lead to my happiness and commitment, his words and actions will very rarely, if ever match.â€

Some of these men mean what they say as much as any person could mean anything when they donâ€™t see themselves or their actions as they really are, are scared shitless that you might really mean it about being done with them, are afraid that they wonâ€™t have someone to massage their ego and sit at the table in their Narcissistic Harem, and who has no real comprehension of true love or care. Itâ€™s like being an alcoholic thatâ€™s in denial. Heâ€™s got a problem and he refuses to face it, which means that everything is out of whack and feeding into the self-deception, which inadvertently leads to deceiving others.
Mr Unavailable talks a very good game. In fact, he talks a complete load of doo doo! He is so distant from the reality of himself and his actions that he believes the crap that comes out of his mouth. He is the consummate actor and on some level, he knows that he is playing a role. You have to understand: It might feel like your situation with him is unique, but the reality is that he has been down this road many times before.

He believes that all he has to do is say the right things and youâ€™ll be silly enough not to notice that he hasnâ€™t actually followed through on what he promised. And letâ€™s be truthful, often we are. Yes we realise that once again he has totally talked out of his backside, but we just keep revisiting the same scene, he makes more promises, under delivers, and then we start the whole charade all over again. He can get away with his actions not matching his words because you let him.

Imagine that you spend ages â€˜naggingâ€™ your guy to take out the bins. You argue about it but he still doesnâ€™t do it. Then for some reason, maybe because you got really medieval on him, he takes it out for three consecutive days, then returns to his normal behaviour. Initially you might not say anything but when it becomes patently clear that he hasnâ€™t changed, you confront him about it and he reminds you about the three occasions that he did take the bins out. This is Mr Unavailable. If they let you down one hundred times, but they didnâ€™t on five occasions, theyâ€™d remember the five, and forget the one hundred. If you mentioned the one hundred to him, heâ€™d call you negative or needyâ€¦ Remember that men are 75% water and the rest is mostly ego, which means that they struggle to see themselves in a negative light unless they are such a creep that they’re Ã¼ber comfortable with it, and you’re in Bad Boy territory there. Most Mr Unavailableâ€™s donâ€™t view themselves in this a negative or realistic light. Theyâ€™re disconnected and deluded.â€

Buy Mr Unavailable and the Fallback Girl: Book One as an instant download. Find out more.