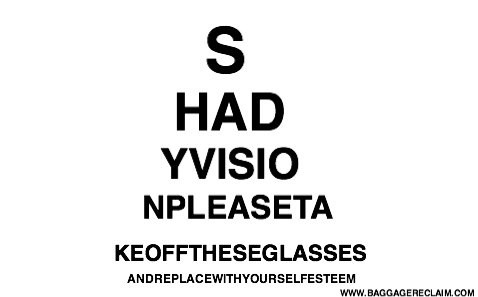 It doesn’t matter if you think that they’re The Most Amazing Person That Ever Did Live™;they’re just not that special.

That means that they’re just not that special that you should resign all of your power and worth over to them.

They’re just not that special that they get a special pass on behaving in a decent manner.

They’re just not that special that you being treated in a less than manner is justifiable. It’s not and I don’t care whether they’re platinum coated with a chocolate centre with an off the charts IQ, great looks, a great lay, an amazing job, or liked by ‘everybody’ – they’re still just not that special.

They’re just not that special that you should pump them up, put them on a pedestal, and then stand beneath it looking up at them.

They’re just not that special that for however long that you’ve lived on this earth, this person has the rights, the opportunities, and the power to basically change you.

They’re just not that special that they get to tell you who they are while defining themselves as an expert on you – you’re the expert on you.

Rejection is a hell of a lot easier to deal with and reject the impact of, when you get your self-esteem house in order so that you can hold your own. This is as simple as operating from a basis that you will treat you with love, care, trust, and respect at all times. This means that when someone doesn’t do this, you’ll step in and opt out or distance yourself instead of taking up a vocation in trying to prove them wrong and demanding that a grown up treat you better.

The fact that someone who you are in essence blowing smoke up their arse and putting them on a pedestal, would treat you in a less than manner, isn’t down to you being a less than person and is in fact down to their character. It’s not about you.

This all goes awry from the moment that you receive the ‘feedback’ from them saying or doing something and you take it as meaning something about you, question what you’ve said, done, or been to ‘provoke’ it, and then in turn make a judgement about you.

From the moment that you’re not receiving the feedback from what someone says or does (or doesn’t say or do) and you’re not relating that information to them as a person and judging the situation and them, you’ve got problems, not least because it has a domino effect.

You make that first judgement call and after that, whatever they say or do gets the same meaning plus often unbeknownst to you, you adjust your behaviour to accommodate the judgements you’ve made. This is dangerous. Next thing you know, you don’t know who you are anymore and you’re blaming everything on the rejection that you feel wouldn’t have happened if only you’d done X,Y,Z.

Many people are under this mistaken impression that everyone has different characteristics, qualities, and values that they bring out for different people. “Oh you’re attractive enough, I’ll roll out my nicey-nice character. Oh I sense that you’re a wrong-un, I’ll bring out my using character and take advantage of you because you don’t deserve my better side. Obviously if you want to jump through hoops and run naked through fire in order to prove yourself to me, I won’t stop you but I’ll neglect to tell you that it won’t make a difference anyway.”

Aside from this giving the impression that the world is overwhelmingly populated with people that have multiple-personality disorders, it also gives the impression that lack of authenticity and character is acceptable when the recipient of it is not worthy of something better.

You are living under a premise that inappropriate, unhealthy, or even abusive behaviour can be explained or even accepted when you believe that a person’s worth is influencing it. Most people do not have a natural aptitude to read people’s mind’s, to automatically know who is trustworthy, friend worthy, or even relationship worthy, and many of us don’t even know what the hell we’re thinking half of the time – don’t you think it’s more than a little bonkers to lead with this assumption that people who treat you in a less than manner are privy to some information about your worth that is seeping out of your pores, or transmitting coded information over a hidden frequency?

Let’s say that they have gotten to know you – why assume that what someone thinks they know or how they treat you is right? The only reason you would believe this is because you are already inclined to be swayed in this direction about you anyway. It’s either that, or you’ve idolised them so much (which would only indicate that you’ve invested far too much self-esteem stock), that when they start chip-chip-chipping away at you, you’re so eager to please and restore the ‘sunshine’ that you don’t see the shady wood for what appear to be the glittering trees.

People don’t always value others or even their things. That doesn’t mean that the person or the object lacks value – it just means that the person doesn’t value it because of their own relationship with themselves and their value system.

Whatever perspective you’ve gained from being in a shady relationship or being mistreated by someone, it’s important to recognise that if you don’t have the self-esteem and the perspective to go with it, it means that you’re viewing yourself through Shady Vision. I’ve seen bad things happen to lovely people – they haven’t, for instance, invited people to commit crimes against them because their worth was being transmitted out to criminals in the area. Part of the recovery for these people is about processing what’s happened and regaining a perspective with their sense of self as opposed to the crime that happened at the centre of it.

Don’t make judgements about you based on a perspective gained from being treated in a less than manner – spend more time regaining your sense of self and nurturing you, than you do trying to legitimise crappy treatment by ripping your character apart.

You never deserve to be mistreated – don’t continue the mistreatment by mistreating yourself in the aftermath.

12 Empowering Thoughts for Valentines Day
Do we really need to forgive?
Stop Trading Yourself Down