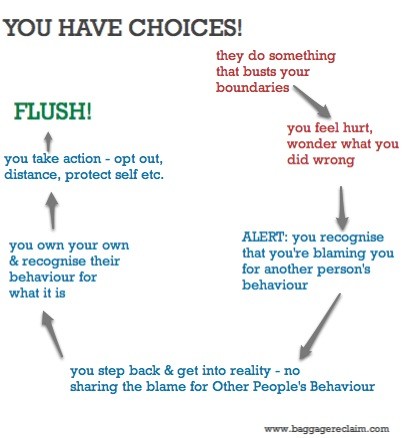 When I suggest to people that they could opt out of the Disappointment Cycle in their lives, which is where they keep responding in a similar manner because they hope that they’re going to get something (a relationship, validation etc.,) and then it doesn’t happen, they get hurt, and then the cycle starts all over again, I’m often met with resistance because they recognise the cycle and want out of it, but it’s like they believe that they have no choice over their part in the cycle.

We all have options but when we’re stuck in a cycle of doing the same thing and expecting different results, it appears like our options are limited to that uncomfortable comfort zone. We like to believe that there’s no alternative to the default response or we recognise that there is, but can’t see our way to choosing the alternative. We object sometimes to the alternative because we think it’s ‘hard’ or we’re scared because it requires us to engage in consistent action and even support it with different thinking.

If like me, you’ve found yourself repeatedly doing the same thing and have essentially ended up treading water in disappointment to the point where you’ve acclimatised to feeling disappointed, you might be feeling a tad mentally and physically worn out, so that the idea of putting one foot in front of the other, or pulling your hand back, or saying words that rumble through your mind and are trapped in your throat can seem like it’s an impossibility or at least a very difficult task. Having another go-round on the disappointment cycle is resignation with a little hopefulness, almost saying “Ack! Sure, one more bet’s not going to do any harm…”

Every Monday for almost 18 months, I’d receive an email. The contents were always the same – asking (more like assuming and confirming) that I was free to hook up that evening. I invariably said yes unless I had a prior engagement, which to be fair would be rare because I organised my life around the possibility of being called up for Other Woman duty. I often hesitated over replying and then I’d push down my feelings and let the hope of him ‘leaving’ take over, and then I’d push down the truth and hit reply. I kept making the same choice and in turn I went to bed with a fat headache every Monday.

The option of him ‘leaving’ wasn’t actually an option just like the option of him ‘choosing’ wasn’t an option either because he’d already chosen long ago – I was just doing a lather, rinse, repeat each week where I essentially said “Look, I know you’re all up for having an affair and that essentially makes it your choice, but I don’t like that choice so I’m going to give you near 52 chances a year to make a different choice.”

I no longer hold myself hostage on long draining phone calls anymore with family members who do the equivalent of calling The Telephone Dump or hitting me with a barrage of drama when I see them. Instead I let the call go to voicemail and call back when it’s convenient to me, or I let The Drainer know that I’ve only got X minutes and make my exit.

I do tend to think about saying YES to things that I’m asked to do, but I’m conscious of this, so I remember to think about whether I actually want to, need to, or even have the time to, because I only end up not meeting my own expectations and feeling p*ssed off.

I’ve said to certainly family members, “Er, actually that’s not true…” or “You can’t speak to me / treat me like that”. The alternative was compromising my integrity or taking a bashing of my boundaries.

You don’t have to pick up the phone.

You could pick up the phone and not book yourself in for shag or you could decline to meet up.

You could listen to the latest excuse and sob story, process it with reality, and draw a different conclusion and have a different response. “I’m glad to hear that you’ve changed and I wish you well but we both need to move on…separately.”

You don’t have to silence your questions and opinions.

You don’t have to sext or lend money or play armchair psychologist or act like you’ve got amnesia and you don’t remember who they are and what they’ve been with you.

You don’t have to blame you. You could have your little moment and then go, “Er, hold up a frickin second here – I’m owning my own and that behaviour is theirs.”

You could think and I mean really think as opposed to dodging rational thoughts and the truth, which would actually calm you down and give you perspective.

You don’t have to chase after every negative thought and pile onto it. Recently, when I catch myself ruminating over the stuff with my family, I consciously pull myself back and refocus my mind. That’s not me avoiding my feelings – that’s me having some free mind time and revisiting old drama and all it does is add negativity to me. Why go there?

Every day, you need to make conscious, considered choices about what you do and what you think. If you stop making those choices, if you choose not to choose and just ‘react’, and if you dodge responsibility, you will unconsciously fall into unproductive and unhealthy habits.

You have options and while you may have a tendency to do certain things, if you recognise what those tendencies are and get conscious about them and work on doing the alternatives out of habit and even do the work to discover where they come from, you won’t keep falling for the same cons over and over again. Start with just being truthful. “They’re calling/texting because ________ and then once I do ______, they’ll do _______ and I’ll feel ________ and lather rinse repeat.” Er, no thanks! None of this “But, but, but what if on the 102nd occasion they spontaneously combust into The Ideal Person™ ?” You’d better off making different choices and practicing acting with self-respect and self-love than you would be playing The Change Lottery on someone who has shown you who they are and what’s what. Let your choices do the talking. Or the walking.

How can they keep doing what they know will hurt us?
Why we’re attracted to emotionally unavailable partners who are like our parents (part 4): Gaining p...
Is it love? Or is it glorification? Stop pumping them up & take down that pedestal!