Relationship/Drama Crack: Are You Creating Your Own Dynasty Level Drama? 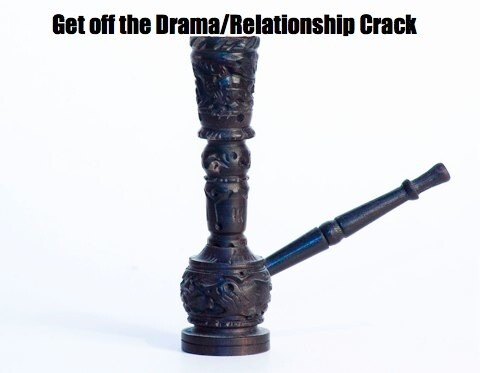 There was a time when something would happen or someone would do something that I didn’t like or perceived to be hurtful and I’d go into a tailspin even if it had nothing to do with me. Being brought up in a home which had a lot of drama in it, it’s unsurprising that I found myself in dramatic relationships, experiencing drama in day to day life (or at least thinking I was or even creating it) and essentially smoking too much Relationship/Drama Crack.

If you’re a fan of Chris Rock like I am, you’ll remember when he says in Bigger & Blacker how women love “Dynasty levels of drama” (I’ve even talked about this with blogging)- that was me, especially in my relationships but I’ve had things kick off at work, university, travelling, family etc.

The key with drama or making dramatisations out of things that happen to or around you is placing yourself at the centre of the reason for it happening in the first place. It’s also participating in Fast Forwarded situations where you experience a level of intensity in hours or days that would quite frankly freak the sh*t out of another person but you’re there kicking back and enjoying the high now.

This is partly to do with how you see yourself and also assuming that people be and do because of others as opposed to it being their character. As a result, you can end up thinking that a lot of things are about you and hating when people don’t live up to your expectations.

With the participating side of things, drama seekers love the thrill of inappropriate situations, intensity, and even potential danger. You like having the last word, being a dog with a bone, and refusing to admit you’ve made a mistake or to accept the truth.

As an ex Drama Seeker, I can still manage a cringe or two when I think about quite frankly weird things that I’ve been naive about that have opened me up to all sorts of crackerjack stuff. A few weeks ago, I visited Whitely’s, a shopping centre in Bayswater central London. In 10 years of living here, I’ve only been there once – why? Because many moons before that, I visited London for my 18th, got lost in Whitely’s, was approached by a guy who was ‘concerned’ and wanted to ‘help’ me find my way back, and somehow found myself agreeing to walk with him. It was like I was a moth to the danger flame.

I couldn’t tell you what was running through my mind, but it was literally as we got to a block of flats and he opened a door to some big burly guys hanging out inside, that I suddenly ‘woke up’, made my excuses and legged it. Lord knows what would have happened otherwise. Mor-ti-fi-frigging-cation!

I’m also the same woman who tried to be ‘nice’ to her stalker at university and only took the danger seriously when he became unhinged and roughed me up, had to turn down numerous male ‘friends’ advances but secretly got a kick out of it, and the list goes on. I’ve dodged various bullets at the last moment due to the ‘wake up’ and had to sort out all sorts of Dynasty level drama.

The truth is, like everyone who is banging sequinned shoulder pads and handbags at dawn, I liked the attention because I didn’t differentiate between positive and negative attention.

When my relationships unravelled or I felt I was losing someone or that they’d find out my flaw, or we had a showdown, or I told them all about themselves, or everyone was fussing around or whatever – I liked the high.

When drama kicks off, you know you have someone’s attention and if you associate drama with normality or affection/love, the high cloaks you…until it wears off. Even if you know that nothing ‘good’ is going to come of the drama, on the high you feel more comfortable, showered with attention and in control of things.

That’s pseudo attention, pseudo comfort, pseudo control which dissipates. As time goes on, especially in relationships, just like drugs, you have to create more drama to feel the same level of attention you used to and it also gets harder to climb back up from the low.

I’ve written many posts on unhealthy and shady behaviour in relationships. I’m not talking about having disagreements, forgetting to do something and the minutae of the day-to-day; I’ve written extensively about emotional unavailability, commitment resistance and ultimately recognising inappropriate behaviour.

I read about and observe situations every day and feel like getting a gavel and hammering it and saying “This is an open and shut case of assholery. Judgement in favour of the plaintiff. FLUSH! NEXT!”

What fascinates me is that people know that someone’s said or done something that ticks at least a code amber or red, and yet there they are indignant, analysing the crappola out of it or researching on the net to see if they have a ‘condition’ that caused it, and denying, minimising, and rationalising.

If you don’t get high off the attention from drama, you may get high from feeding off the irrationality and almost absurd assholery of another person.

While you dislike or even hate their behaviour, your drama then becomes trying to understand the workings of someone else’s mind – a someone, I might add, who doesn’t think and act like you, so you could never understand unless you’re planning to be like them or are like them. You then create even more drama by refusing to accept what their actions mean and instead decide that you will be the exception to the rule and make them change.

I no longer have any desire to feed off danger, inappropriateness or just things going haywire in my life because it’s like saying that I can only feel good if my life is screwed up. I just can’t stomach the rollercoaster. That’s saying a lot for me because I literally come from a home where my parents drama, especially my mother’s controlled the temperature of everyone’s moods.

I don’t think someone’s trying to destroy me, I don’t believe I’m an unloveable person, I don’t think I deserve poor treatment, and I also don’t believe in investing any chunk of my life, no matter how big or small into playing Columbo and investigating the crappola out of someone else.

I say this to you (and yes this is one predominantly for the ladies) because we spend too much time sucking on the Drama/Relationship Crack pipe which means that life is like one scene after another of Dynasty level dramatisations.

You’re the only person you can control and if you don’t like the drama taking place around you or you have genuine aspirations to be happy and in a mutually fulfilling healthy relationship, you and only you have to stop participating in drama whether it’s creating, seeking, or analysing the crap out of it and then trying to change people.

It’s time to be choosier about who you associate/interact with and distance yourself from those who can create drama with a paper bag. Stop feigning naivety – yes feigning. Drama comes from the same type of people, the same type of situations. Look up code amber and code red behaviour – that’s a list of drama right there.

You’d literally have to be a frickin’ ostrich not to recognise what spells drama – none of us were born yesterday and most of us have a back catalogue and a life resume to draw on that indicates where drama comes from – stop trying to be the exception to the rule and stop being a short-term thinker, because the crack feels good now, but you’re suffering medium to long-term consequences.

Your needs matter. There's no need to be The Strong One.
Reader Question: How do you teach someone boundaries for a healthy relationship?
Can You Make (& Stick To) a Decision? If You Can't, You Have Commitment Issues