This month, I’ll be catching up on some overdue R&R and so while I will be posting plenty of new stuff, I also wanted to revisit some previous posts…. 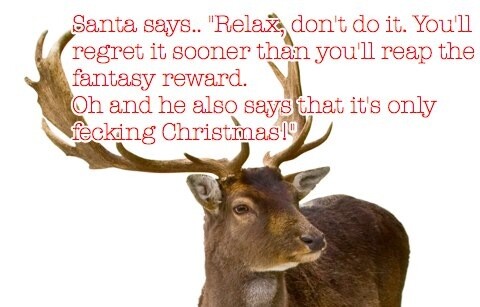 This time of year, whether you’re single or in a relationship, can bring about an incredible amount of anxiety. It can also have you thinking and doing things that in retrospect, when you get to January, will have you wondering if someone was coming into your home and spiking you with a cocktail of Drama and Relationship Crack. I of course, say this with experience.

One particular December was spent ‘negotiating’ (read: stating my case, laying it down on the line, discussing, arguing, wheedling, telling him all about himself and lather, rinse, repeat), with the guy with a girlfriend.

I had this fantasy that he would be so devastated at the thought of me being out of the country with my family and having the possibility of being swooped up by a better man (’cause ya just know I kept reminding him that plenty of guys would want to treat me better), that he’d break it off with his girlfriend and announce that he was coming to Dublin with me. The reality could be summed up in four words – “You know my situation…”. Then I accidentally left my mobile phone in London – I spent the whole Christmas hiding in the toilet crying and making sneaky phone calls plus I’ll admit I wondered whether he would have fulfilled my fantasy if he’d been able to reach me… Thank God I stopped taking the delusion crack.

I’ve also had several Christmases – about fourteen of them actually – where the anxiety about buying a gift for my mother and ‘measuring up’ has had me overspending and/or being riddled with such a desperate urge to be validated that I’d feel ill.

I’ve ended a relationship before Christmas because I couldn’t face having to grin and bear it, and then I’ve grimaced my way through another and thought that I was going to experience a Miracle on Assclown Street when it was more like A Nightmare on Assclown Street – cue me having to wear the ‘gift’ of clear heeled hooker shoes, ‘nude’ coloured tights and short leather skirt so as not to ‘offend’ while I grimaced through tears. I left the bar after 15 minutes and literally felt like I’d sold my self-esteem to the devil.

If like me, you’ve done all manner of bonkers stuff around The Holidays, whether it’s suddenly reaching out to an ex or being receptive to their rather pathetic overtures, or suddenly thinking you’re owed a miracle and a happy ending, it’s time to ask:

What’s so fricking special about December? Why do you allow December to take on all manner of meaning and start making grand assumptions, even grander plans, and buy into the fantasy?

I get December on a whole spiritual and religious level. Even on an emotional level, I recognise that as the end of the year approaches, it’s natural to be reflective, but it doesn’t explain why we allow what is another month in the calendar along with some heavy marketing, peer pressure and more importantly, internal pressure along with our overactive imaginations, vaginas/penises and libidos to turn us all crazy.

It’s just December. It’s just The Holidays/Christmas – how much power do you want to give away again?

For people who are struggling with their self-esteem or an unhealthy relationship, you spend eleven fricking months of the year handing your power over to other factors such as your current partner, or an ex, or your job, or your past, or your family or whatever, and now December comes along and it’s like it owns you.

I remember a very old episode of The Simpsons where Homer almost gets himself into an affair situation with his coworker Mindy. All evening he appears to be getting signs, including from a fortune cookie, that he’s going to have sex with her. He ends up sitting beside her on a bed in a hotel room looking utterly miserable as he announces that they’re going to have sex. Mindy tells him he doesn’t have to and he says “Yes we do! The cookie told me so.”

That’s what December is like for a lot of people.

They hook up with exes, buy cards, send texts, reply to what can only be regarded as low level contact, break their necks trying to think up the perfect gift for someone undeserving, allow themselves to be used as Christmas beards where they keep someone’s bed and their ego warm for the season so that they can pretend that their life is better than it is, hold shit relationships together as if the magic of ‘December’ will fix problems that only you both can fix, bust their proverbial nuts about how crap their life is in comparison to an image of happiness that they’re being sold by companies that want to make money out of them, and essentially allow themselves to be ‘led’ by an image of a month.

When January arrives or even before the month is out and you’re asked why you did this stuff, it’s like “I had to do it! December told me so!”

For some of you it’s “I had to do it! The adverts like the soppy John Lewis one or the Coca Cola ‘Holidays are coming’ ad told me so!”

This is bullshit! It’s no wonder we get angsty about it when we’re being sold ‘Christmas’ from as early as October – we’re being sold and if you don’t have the presence of mind to remember who you are, your values, and the fact that there’s eleven other months in the year, you may end up doing something in the short-term that leaves you with a medium to long-term hangover.

It’s just The Holidays. Yes it can be a pain in the bum if your family are crackerjacks and descend into arguments at the dinner table (that would be mine), or you’ve fallen out (that was us last year), or you’re hurt (I’ve ticked a few Christmases off with that one), or you feel like it highlights everything that’s missing from your life. But don’t get things twisted – it’s just a few weeks and you can make them as big or as small as you want to, but whatever you do, put yourself in the driving seat of your own life.

Whatever your religious inclinations, the true meaning of Christmas/The Holidays was never about opting back into a poor relationship to massage your ego for a few weeks or holding onto something that detracts from you just so you can say that you’re miserable but you’re with someone.

Stay off the Relationship/Drama Crack – it doesn’t work for you during the rest of year, it’s not about to suddenly give you the ‘fairytale’ because it’s December!

Also check out 45 tips for surviving Christmas and dealing with Happy Birthday’s and big occasions.

It's JUST Christmas/The Holidays - Stay off the Relationship/Drama Crack
Understanding what makes you angry & why in relationships & post breakup part one
Chasing Crumbs & Perfection: In Pursuit of The Fantasy