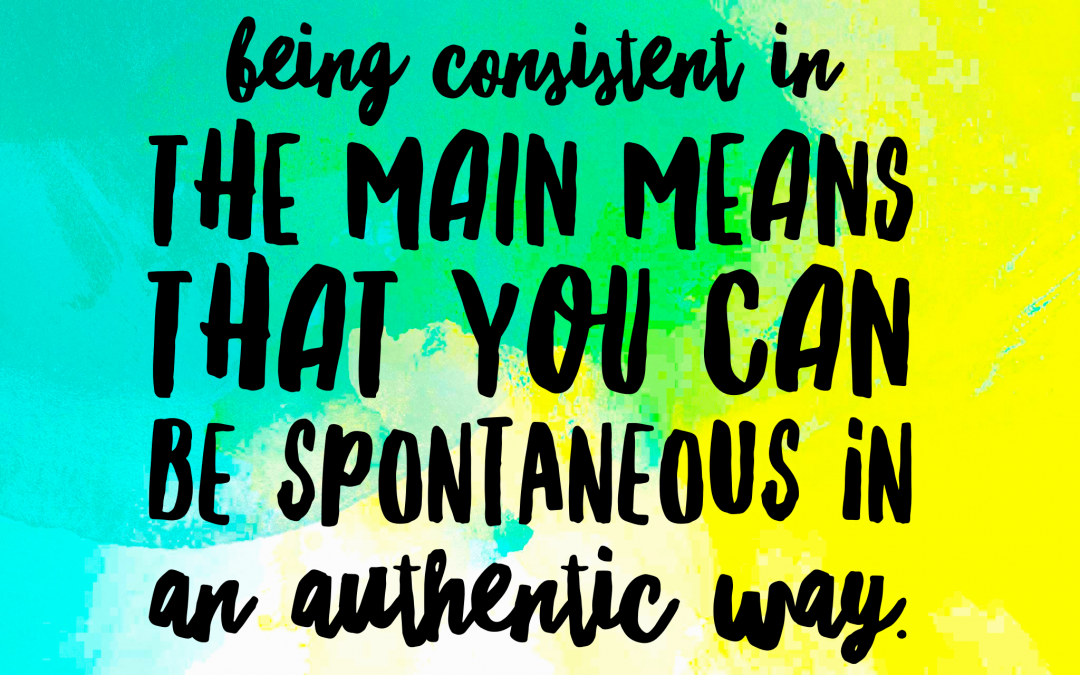 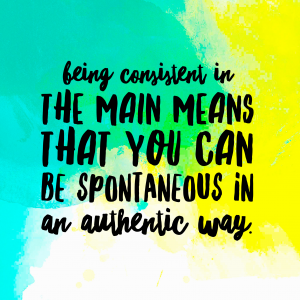 Have you ever made a special concession for someone because you wanted to give them the benefit of the doubt or because you felt that they were special, only for you to find yourself grappling with boundary issues? Or maybe it’s that you unconsciously deviated from what you consistently do and have tried to revert to the norm only to be met with resistance from the other party? If so, you’ve not only encountered somebody who doesn’t handle exceptions very well but it’s likely that you’re discovering that you don’t handle your own exceptions very well.

Consistency is a landmark of healthy relationships and yet many of us resist it because we associate some of the fluctuations that are experienced from inconsistency with spontaneity, which can also appear to pave the way to the likes of passion, excitement and chemistry. Now I don’t deny that having a level of spontaneity in life full stop, is something that we can all build into our lives but when we are spontaneous about how we uphold our boundaries and live by our values, our lives are haphazard.

When living happily and authentically is what we consistently do, the odds of what we do spontaneously being in line with this are very high. If, however, we don’t have a good grasp on who we are plus we’re prone to people pleasing and so trying to influence and control other people’s feelings and behaviour by being compliant even at the expense of our own needs, expectations, desires, feelings and opinions, the odds of our spontaneity being a reflection of our true selves is mighty slim.

Now throw a third party into the mix who has their own relationship with boundaries and values: If they’re in the camp that gets boundaries, then regardless of whether we uphold our boundaries or not, they’re likely to be behind the line, but if they take their cues, not from their own internal guidance per se or even what they know in general to be right and instead get the measure of things via cues from what they perceive as the length and breadth of what we’re OK with and how that fits with the opportunity to ‘get’ something, they will maximise exceptions either at the time or store them, even if it’s subconsciously, in their long-term memory to bank at a later date.

So let’s imagine that you’ve made an exception in the early stages of dating someone because you felt as if they had a lot of potential and didn’t want to scupper your chances. It might have felt like an investment in your joint future. You might have regarded this exception as a one-time thing and even moved on from it but it, along with what they regard as other inconsistencies even if they were smaller and didn’t even ping on your own radar, have been filed as evidence or even ammunition to get you to change your mind at a later date [about the boundary or another one]. They boundary bust at various sizes which makes it confusing because if they go smaller than previous, you might not want to appear to be picking them up about everything not realising that it might get turned back on you at a later date.

It’s for this very reason (not having passed-over boundary issues blow back up on you in the future) that I encourage people to strive to be authentic while dating so that if and when an issue arises, they deal with it rather than having a conditional attitude towards themselves which results in a conditional attitude to the application of their boundaries.

If something happens that pings on your discomfort, it’s a cue to be more boundaried.

That doesn’t necessarily mean that it’s time to sit that person down and explain your boundaries but what it does mean is that you need to snap out of whatever fugue state that’s been brought on by dating so that you can be conscious, aware, present and boundaried. In this way, you are clear in your intentions if you choose to let something pass rather than flitting with your boundaries because you think that it will reward you with a relationship. When you’re intentional in your decisions, you won’t wind up feeling ill-done-by because you will consider the consequences and even communicate with the other party about it as opposed to reacting to a situation and then making the exception as a way of temporarily dispelling tension that’s bound to return when another issue arises. It might not even be a major issue but if you make exceptions and something else comes along, it’s very possible that you will feel resentful because on some level you hoped that the issue would disappear.

Many of us assume that it’s inherently understood that it’s an exception that we’re making, even assuming that the person knows our special reasons for doing so. We are too assuming and yes, too trusting that it won’t be misinterpreted or taken advantage of.

Many of us also assume that we should only have to make a boundary clear once. This means that if we have a poor relationship with our mother and we finally speak up about what it is that bothers us, we expect that to be the end of it and often grit and kiss our teeth about ‘having’ to maintain that boundary consistently. Interestingly though, sometimes we take making the exception as a sign in and of itself of us making the boundary clear, again assuming that the other party knows that what they’re doing is a problem for us or a problem in general. On some level we hope that they will feel guilty and so feel obliged to ‘do the right thing’.

If we’re haphazard in our application of boundaries, they can come across not as boundaries but as reactive and punitive measures that are aimed at trying to shift things on to our agenda.

If we’re consistently being ourselves then we know where we stand plus we won’t grapple with grown-ups who seem to want to test the waters with how much they can get away with and then argue about how unfair it is that they’ve busted our boundaries before and are not being given the green light to do so this time.

Some people cannot handle exceptions and it’s our job to recognise this so that we don’t keep doling out the exceptions and expecting them to respond differently. We don’t need to be perfect with boundaries (no one is) but what we do need to be is consistent because we feel the pain when we make exceptions. We wonder how doing what felt like a good thing can end up feeling so bad.

When you’re consistent, you have a lot of clarity about what feels good and right for you. Before you decide to turn a blind eye to something, ask yourself whether you have consistent experience over time to warrant you making such a decision. If not, get grounded!

Podcast Ep. 26: Just Not That Into You Or Unavailable?, Super Late, 'Overnight Success'
5 Questions To Ask Yourself Before You Have Sex with a Partner for the First Time
Faux empathy and backdated empathy: When it feels like you've been 'jacked'