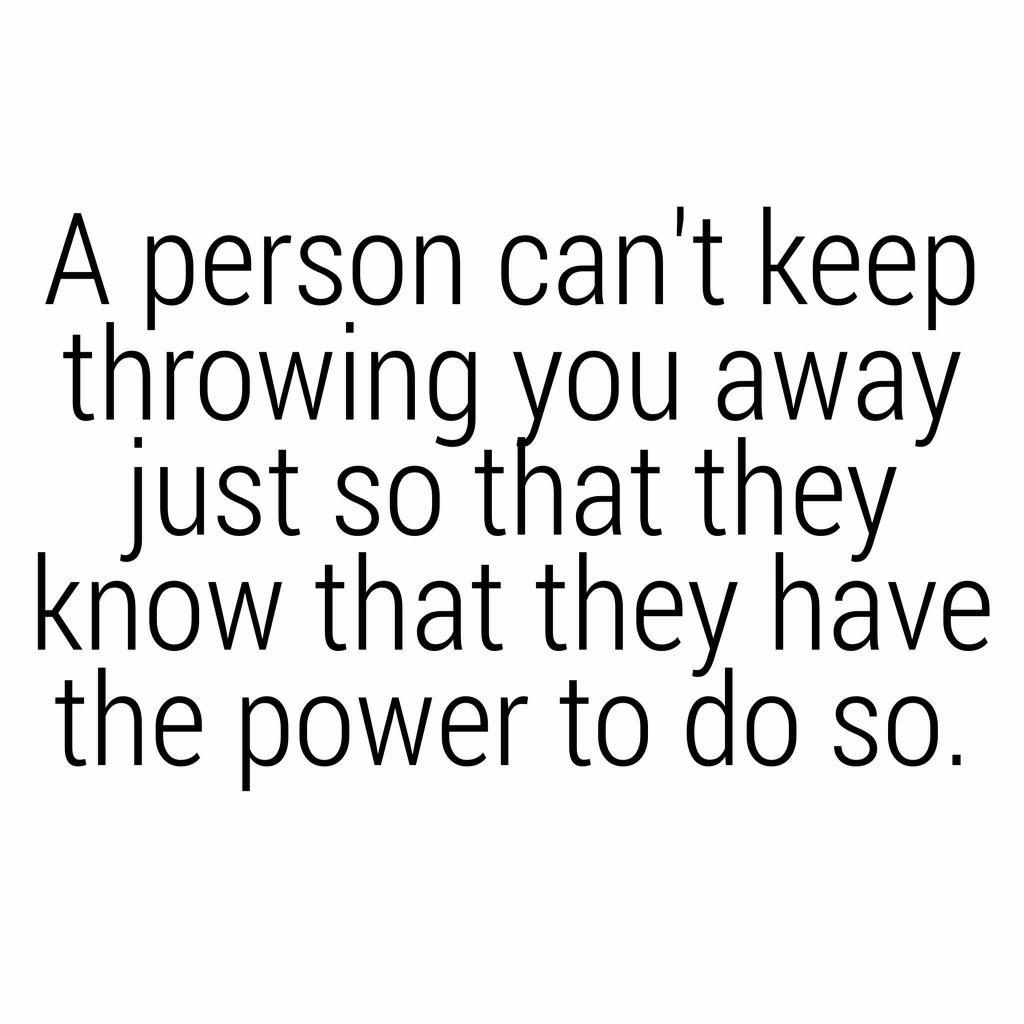 Some people jeopardise the things that they love or claim to love. Their way of feeling as if they love something, or to at least feel that it’s of value, is to put it at risk. They gamble and in their mind, it’s as if they have to take these risks to renew their interest and commitment. On some level they may reason for instance, that putting their relationship in jeopardy is what’s keeping the passion alive. They may even reason that if it wasn’t for the fact that they get up to their shenanigans, that the relationship would be some ‘boring’ type that they’re afraid of finding themselves committed to, and they may even reason that the rollercoaster of basically gambling with a person’s affections and trust and jeopardising the relationship from time to time, is what’s made it last.

At some point, they’ve learned to associate desiring something and it being of value, with high stakes and uncertainty, so they desire something or someone at their most, when they’re either unsure of whether they can attain it/them, or when they’re in danger of losing. Some people will put themselves and even the object of their ‘affections’ to the test by taking the risk to the brink. They may enjoy the power and the danger, even if the person on the receiving end is actually going through emotional torment and it creates a lingering trust issue.

People who jeopardise the things and people that they love, need to know that there’s a possibility that they can lose them.

Relationships, and in fact life, involves us having to be vulnerable. We have to make choices, decisions, and basically commit, and all the while, there are no guarantees. Often when we struggle to trust ourselves and others, what we’d really like is to know exactly how things are going to go so that we can eliminate or certainly significantly reduce our risk. That’s just not how life works. There is always the possibility that we can lose something or someone – that is how life works – and yet, when we say we’re going to commit to somebody, we are promising ourselves to that person, and for some of us, not only does our fear of commitment make us clammy and conflicted, but it also takes the edge off or even kills our desire.

When a person who puts their relationships at risk becomes ‘too certain’ and in control, it feels uncomfortable and that’s when they start to feel itchy footed and bored. They get too close to their feelings and thoughts and even if they don’t fully understand where these are coming from, there will be an element of underlying fear, inadequacy, and even resentment. They may be ‘bemused’ at being in possession of something of value and when for example, they know that they may have even misrepresented themselves in order to gain it, they at once start to devalue it from a sense of feeling unworthy and at the same time, once they’re in danger of losing and are out of control, they suddenly value it again and also feel worthy of ‘ownership’. If they have to fight to regain their position, it confirms, for a time, that they are worthy of that person (or thing). They may even feel as if the risk has leveled the playing field. Some like to feel the sensation of jeopardising something and then swooping back in. They feel powerful.

Of course when a person keeps jeopardising someone they love, even if it’s not what they consciously intended, it does sabotage not just the commitment but also the intimacy in the relationship. Where one is being sabotaged, so is the other.

By putting the relationship at risk, they actually get to control how vulnerable they are. No one can get close enough that it would hurt if they were to lose that person. Their actions also stop a person from truly knowing them in a deep way. Frustratingly and very painfully, a person who keeps putting their relationship at risk but is taken back time after time and so isn’t experiencing a great deal of natural consequences, gradually loses respect for the person who is attributing too much value to them. They may take greater and greater risks and become increasingly careless, all while chasing the feelings that they associate with desire and love. It’s exhausting, confusing, frustrating, and even emotionally debilitating.

If there’s little to no boundaries, it sends a message: This person isn’t ‘valuable’ to me because I can’t lose them. It’s why I stress that we should never give anyone the impression that there is no limit to what we will put up with because it says, ‘I don’t value me and you don’t need to either.’ Boundaries and treating and regarding ourselves with love, care, trust, and respect and expecting that from others, says, ‘Value and respect me, or step so that I’m free to be around someone who will, even if that’s just me, myself, and I for the time being.’

These feelings that they chase are temporary, which is why, until they address the root cause of their issues, they will just lather, rinse, repeat. Just like people-pleasing only makes us feel temporarily better or even ‘safe’, the high from risk taking is also temporary, which is how many people end up with gambling problems – too much short-term thinking and avoidance. 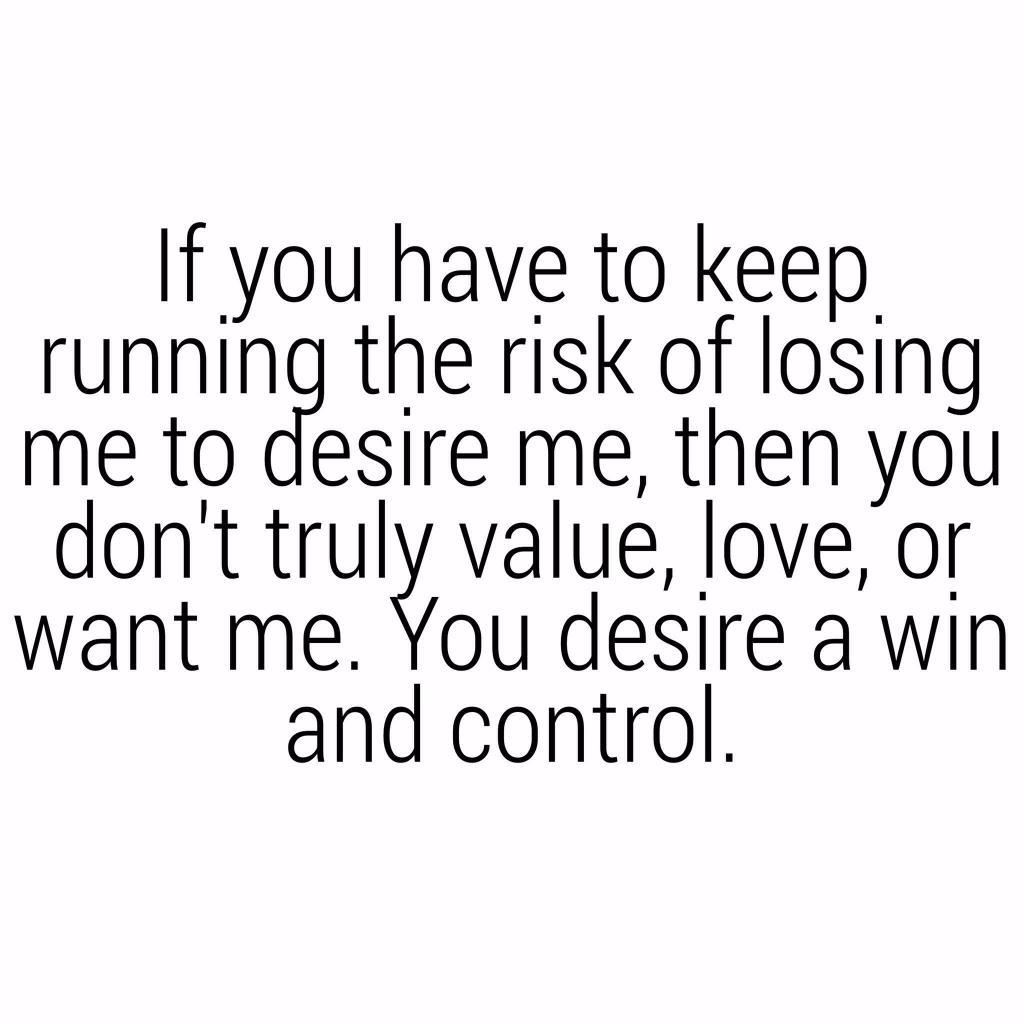 If you’re with somebody who keeps jeopardising you and your relationship, there comes a point, and preferably sooner rather than later, when you have to realise that you can’t keep being gambled and put in emotional harm’s way, just so that that person can desire you and know that you are of value. You’re a worthwhile and valuable person already and it’s important that you treat and regard you as such, even when another person doesn’t have the good sense to treasure you.

If a person keeps risking losing you, they don’t value you enough to not be putting you at risk in the first place. They’re too busy sabotaging things for the sake of their ego when they could be forging a mutual, loving relationship. You have better things to do with your time than to be fighting someone to stop throwing away what you have.

PS I’m doing my monthly guest spot on my local internet radio station this coming Tuesday March 4th at 7.15pm GMT. As always, I will be answering listener and reader questions. If you’d like to submit yours, send it natalie AT baggagereclaim DOT co UK. You can be anonymous.

Recovering from somebody doing a U-turn on their feelings or proclaimed intentions
Advice Wednesday: I'm not over my ex--Opt out of my new relationship or see how things unfold?
Chasing Crumbs & Perfection: In Pursuit of The Fantasy
Share this...