Some people hover just below your boundary line 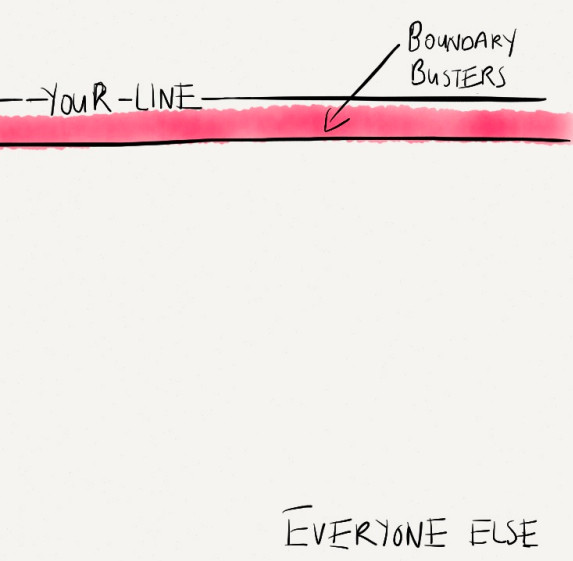 While receiving treatment for my shoulder and neck a couple of weeks back – all better now, thank you! – my osteopath explained how we all have thresholds of stress and if we are very close to that threshold, it will not take much to tip us over. Many of us believe that we’re fine and only know how close we are to that threshold when something happens and it seems to cause us to spiral. We are what I talked about a couple of years ago or so – acclimatised to stress. To ensure good health, we have to listen to ourselves and make sure that we’re well below that threshold so that life’s inevitable bumps don’t have the ability to tip us over the edge.

At the time I remember thinking, Hmm, this reminds me of boundaries, and then I forgot about it until I had a couple of incidences with people who are filed in my mental Roladex in a small section that features certain people in my life who have boundary issues, and something struck me:

When a person tends to have boundary issues but they appear, after what is likely to have been some wrangling and back and forth, to be staying within your boundary line, the next time they decide to cartwheel and tap-dance all over your boundaries, is when you will see that it’s not that there haven’t been issues with them – it’s that there have likely been mini, minor and medium transgressions that kept them just below that threshold.

Just like an ex who woos you back with big promises and grand gestures and then gradually eases right back to whatever they were doing that caused the original issues and had sworn was going to change, the person who hovers below the threshold (right below your line) may tow the line for a while and then gradually start edging their way up to the threshold. We all have to pick and choose our battles and there’s also the fact that we may compare a person’s behaviour and so historically – and this is particularly with family – stuff can seem so minor in comparison to what they were doing before that you might accept their version of ‘minor’ when it would be pretty major if it were someone else altogether. We may lose sight of the bigger picture. We’ll also flag up certain things from time to time and let other stuff go because we don’t want to be riding someone’s arse like Zorro over everything and we want to show willing. We want to give the benefit of the doubt. Hell, we don’t want to spend our time trying to raise a person from the ground up.

Again, just like the ex that woos you back and then manages down your expectations to maintain the status quo, someone who’s been hovering near the threshold will remind you of what they feel are their good deeds and intentions rather than acknowledge the fact that they’ve gone over the line.

In fact, people who have boundary issues but give the appearance of appearing to respect them, are often making their underlying resentment and anger, whether it’s about you or just in general, be known through their passive aggression – some people have sworn that they’ll never be ‘told what to do’ after certain experiences and so will rebel, even if their form of rebellion is disrespecting you and others. The big problem with passive aggression, especially if you’re unaware of it, is that passive aggressive people appear to be compliant while being covert and obstructive. This is the key thing to look for – where have they been saying one thing and doing another? Where have they been difficult but not admitting that they are and then trying to put that on you?

When a person has previously busted your boundaries, seemingly steered clear and then goes too far and crosses the line ( it becomes ‘high stress’ for you), they may act as though they’ve amassed the credits to do so because they have been behaving themselves (or haven’t been caught or had it it pointed out). In some instances, they’ll remind you of how they’re almost been ‘inconveniencing’ themselves by having to behave….

It’s at this point when you become aware of that uneasiness that exists with people who are not au fait with healthy boundaries. Those other instances that were close to the line but were put on the mental backburner, suddenly give you the awareness of how close to that line you were with that person. You may have had to battle to draw a line with them in the first place, despite the fact that you have people in your life who never come anywhere near your line and so you experience relative peace with them. You don’t get put into the position of having to explain why something is a problem because you have a mutually respectful relationship with a person who values boundaries. Even if you have a disagreement, that won’t result in going over the line. It will just be a difference of opinion.

The great thing about having boundaries, is that you only need to be particularly concerned with them when it comes to people who fly past their roost. As I’ve said many times before, having boundaries isn’t about ruling people – it’s about knowing your own line and your limits, and representing this in your own treatment of you and where and who you spend your time and energies on. What can you do with someone who hovers close to your line? If opting out of the dynamic isn’t an option – they may be part of your extended family for instance – you just need to keep you at enough of a distance that you know the limits of your interactions, instead of expecting that they’ve changed. In this way, you will not be surprised when they run true to form but you limit how much you will be affected by them.

Recognise that uneasiness as the cue you need to have a habit of being boundaried around them. Recognise the sense of peace and mutuality in your other relationships as the cue to where your energies should be directed.

12 Core Boundaries To Live By in Life, Dating, & Relationships
Personal Happiness: What do you want? Part One
It's JUST Christmas/The Holidays - Stay off the Relationship/Drama Crack