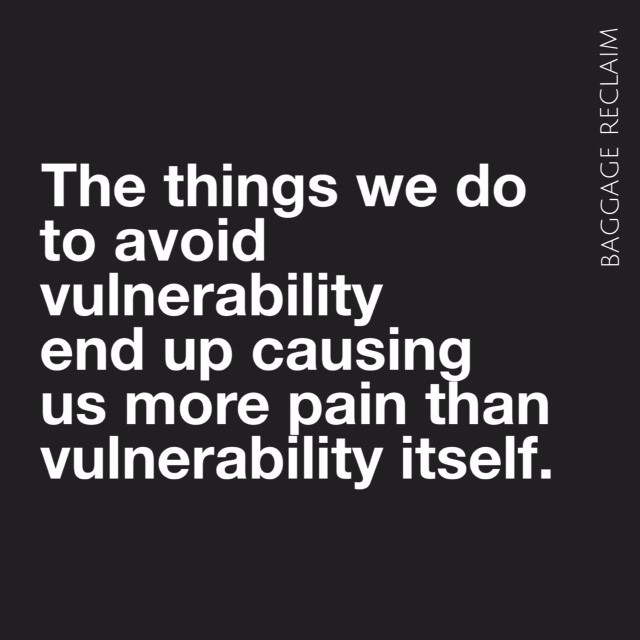 Some people roll with the You’re either with me or against me attitude, so they have a dangerous expectation that if we are their family member / friend / partner etc, we must always agree with them (even if we don’t) and anything they perceive as criticism can be met with a great deal of hostility and/or radio silence, so we can be chopped from their lives temporarily or permanently and not always know why, or be baffled as to how it escalated to that level or why there was little or no conversation.

Even without this attitude, conflict and criticism (C-situations), whether it’s the actuality of it or just the potential for it, does bring up vulnerability and if we are not comfortable with expressing our truth as we know it at that time, or stepping up for ourselves, hearing their side or dealing with any potential fallout, we may feel inclined to ‘go dark’ so that we remain safe. Our comfort zone can become not honouring our boundaries and not learning how to navigate conflict and criticism because at least we don’t allow anybody to get close enough to us that we might not be able to deal with what we regard as the bigger pain of disappointment. We use associations with past experiences to inform us and then end up wondering why we’re simmering in resentment or feeling isolated even if technically, there are people around us.

Ten years ago, when I embarked on having boundaries, I was terrified of the vulnerability that came with not only getting honest with me about my own needs, feelings, expectations, desires, opinions and beliefs and how I was going to go about honouring these, but that also came with having to express them with others. Both sides of my family are not into discussing or apologising. This one isn’t talking to that one and I’m sure half the time they can’t even remember why. I hardly know most of my mother’s family and on my father’s side, they’re very Soprano-ish (clan-like not putting bodies in the back of cars), so if you annoy one, you annoy them all, hence why it’s mostly been tumbleweeds since I got married.

If I were to go by my experiences with my family (and similar people), I would be terrified of having boundaries and dealing with C-situations, so I’d just keep it zipped, do whatever I think is pleasing, and fester in misery. No thanks!

Back then, I was afraid of allowing people to be close enough to my truth that it would hurt if they didn’t react in the way that I wanted or predicted. I feared hearing their opinions about my boundaries because I wondered, What if they don’t agree with or like them? What if they cannot do what I expect? What if they criticise and judge me? What if I have boundaries and everyone abandons me?

The funny thing about not having boundaries is that when you think about the prospect of having them, you imagine a hell of lot more conversations and conflict about boundaries than is the reality.

I was terrified of hearing their opinions and dealing with their responses about my boundaries and what appeared to be the easy thing to do was to either go down a well worn path of not having boundaries and then being miserable, or cut them off.

Sometimes cutting people off is seen as the ‘easy’ option because we don’t have to deal with anything. We can just shut it off… or at least try to. Incidentally, this is exactly why some people disappear. (And before anybody asks, disappearing is entirely different to No Contact!)

There are situations and people for whom removing yourself is the best option because they’ve made it absolutely clear that they’re not going to respect your boundaries. They have selective hearing and memory; they try to influence and control you by force; they seek to get their own needs, desires etc met by force, and the relationship is essentially abusive and destructive. Whether it’s romantic, familial, coworker or friendship, somebody who behaves like this will drain the life out of you and drag you down, all while probably blaming you for it too.

Sometimes, it’s not so much that the relationship is abusive but it’s become exhausting, you’ve reached an impasse and there just isn’t a great deal left to say or do that hasn’t already been covered. It’s not even that either side is cutting off– you just stop engaging. The situation is accepted for what it is and over time, you grieve and make your peace with it. You might even get to the point of appreciating the relationship for what it taught you or for the good times but knowing that that season of your life has passed because you can’t remain in a time warp. You’ve evolved.

When I come across people who have the, You’re either with me or against me attitude, they’re often triggered by previous memories of conflict and criticism including feeling ganged upon, unheard, made to be “wrong”, or played for a fool, so they go to the nth degree in defensiveness and don’t distinguish between the past and the present. When they’re in the wrong, rather than admit it, they actually spin their wheels in the conflict trenches and spread more mud splatter.  There can even be this fear that in being vulnerable and acknowledging their part no matter how small, that they’re conceding something to someone from the past, so not being “100% right” is seen as terrible. Once recognition that they’re off base or even going OTT creeps in, embarrassment or even shame (even if they won’t admit it) causes them to cut off and then rather than apologise or try to have a discussion when they’ve calmed down, they either stay away for good or they come back when they think that we’ve forgotten about it or that we’ll be feeling too awkward about spoiling the mood by “bringing up old sh*t”. If we do try to discuss it, they’ll bust a gut trying to sweep it under the carpet or vanish again.

Sometimes as humans, we have to stand still and allow ourselves to be seen and to see others.

It is very tempting when we have to be vulnerable with people, to do the opposite and put up walls or even cut them off entirely so we don’t have to deal with them (or us). Unfortunately walls take their toll and it’s not always a workable solution to cut off for instance, a family member plus when we do it as a habit, one day we realise that sometimes we’ve thrown the baby out with the bathwater and all just so that we wouldn’t see, hear or feel certain things that might have grown us in some way, that were not as bad as we predicted, and in fact are more of a release for us than the feelings, thoughts, and things that we’ve dealt with in our quest to avoid.

We realise that all of this cutting off for any and everything that we don’t like has meant that we’re almost in a guarded position waiting to put down the gauntlet and that doesn’t leave much room for love, care, trust and respect.

We discover that it’s not better to hide behind the mask of bad boundaries and that fear of being authentic and the vulnerability that comes with it, is compromising and hurting us in greater ways than vulnerability itself.

We don't need to 'confess' our bad relationship experiences to a new partner
Giving to get along
Are You Hankering for the Zsa Zsa Zu or Chasing a 'Feeling'?