Super Late: How we treat time says a lot about how much we respect other people’s time 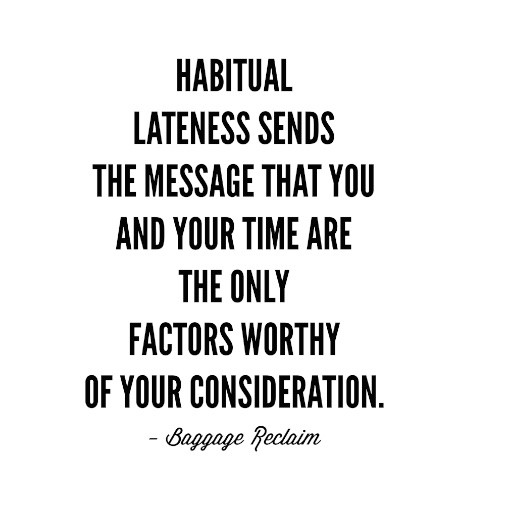 If you’ve ever stood (or sat) around waiting for somebody who is late, you will understand how frustrating and downright awkward this can be, especially when they either don’t warn you that they’re going to be late or they have a habit of being late on the regular. Equally, if you are typically late and have received flack for it, you may struggle to understand what the problem is because from your end of things, you either feel that there are genuine reasons for your lateness or that they’re making an unnecessarily big deal out of it.

A friend of mine was recently kept waiting for four hours – yes, you did read that correctly. Four feckin hours. That is far beyond the bounds of acceptability. My first thought was, What’s so special about this guy that you’d circle around Victoria station for a few hours while he hung out in the pub with his mates?

We know when we’re going to be fifteen minutes late and a person who is four hours late knew this some time between one and two hundred and forty minutes before they decided that they would bother to show up.

The way that you feel about and deal with timekeeping is really a matter of values, namely your personal values, the ones that speak for your character.

Sure, there will be people who will argue up and down about how culture has its part to play in the acceptability of lateness but we can all think of generalisations that are made about cultures and races that are not actually true of the people we encounter from these.

It’s not that things don’t happen and that none of us can ever be late but how we typically treat time does say a lot about how much we respect other people’s time as well as our own.

People who don’t really care about keeping people waiting or disrupting their schedules, have an over-inflated sense of their own importance. When did common courtesy die a death? In an age where you could almost say that we’re over-connected, how the hell can a person fail to notify us that they’re going to be late when we have mobile phones, texts, email, Facebook, WhatsApp, IM, Skype, Twitter, Instagram and the list goes on?

We’ve got to quit with this bullsh*t, super busy malarkey. Habitual lateness (super late people) is just an extension of this whole carrying on as if we’re busier than a world leader. No we’re not!

When we don’t respect and value our own time (boundaries), we over-promise ourselves in the name of pleasing and fear of saying no, winding up malnourished in the self-care department. We also don’t acknowledge where our concept of how long it’s going to take to do something or get somewhere, is inaccurate.

Habitually late people have an element of passive aggression in there and some will have people pleasing in there too. Most habitual passive aggressives will not own up to their behaviour because they have a carefully constructed framework of truth that they feel legitimises their habits but let’s think about what the habitually late do:

There’s also one other particular reason that has a significant part to play: People pleasers are often unwittingly transactional and as such, on some level feel that they’re building up credit.

Even if a habitually late person (who is also engaging in people pleasing in some other aspect of their life) recognises that they’re out of order for being late, on some level they rationalise that because they do [whatever the pleasing is] this gives them credits to be late. They might reason, for instance, that they do a lot of good deeds even though, sure, that’s great but that doesn’t mean that people should pay for that with their lateness plus they may not be acknowledging that there’s underlying resentment about some of their pleasing and over-giving that’s playing itself out through the tardiness.

Habits are based on associations that become cues and triggers for us to think, feel and act.

Whether we’re super punctual, on time, or habitually tardy, if we trace our way back, there are specific reasons and associations that we have.

Some people remember how awful it felt to watch others keep people waiting or to be the person who was kept waiting (e.g. my father would sometimes show up days late) and some people discovered that they can actually control others with their timekeeping – a form of rebellion that lets them play out the resentment they’re masking. This means that a habit may have been formed to get back at someone else in their past and then it became their default and they haven’t realised how it’s not working for them when they for instance, keep pushing the boundaries with the time they show up at work. Some people observed other tardy folk and it became learned behaviour. It might even have become a coping mechanism for dealing with an environment with little or no time boundaries. Some people actually like this idea of being the last one to show up.

Whether we stress about being late or being kept waiting, or we’re not that fussed about being punctual or about who we keep waiting, some of the clues to why are in our past. We may not be differentiating between it and the present.

What we do or we don’t accept in terms of our own timekeeping and that of others, is personal, so what’s OK for one person or a particular relationship isn’t going to work for another.

When it’s only our own time that we’re messing with, we’re free to do with it what we want although we’re not free of the consequences of not taking care of our time.

If you’re a very punctual person, this habit is handy but it can also be a source of stress if you keep trying to make habitually late people change or you keep showing up on time for the late person. It becomes a passive aggressive power struggle that can really shake your confidence and stoke resentment. Halt.

We have a few friends and relatives who must have been born late. We either tell them that it starts earlier than it does or we don’t make any arrangements that are dependent on them.

If you’re habitually late, try to consider other people’s positions (empathy) as well as the commitments that you’re making and get familiar with your habits and acknowledge any passive aggression lurking beneath, no matter how small. Be more realistic with your time and give as much notice as possible so that people have a chance to adjust their schedule, or yes, reschedule you. Only say yes to what you can stick to.

If you find that you’re very stressed by your own timekeeping due to fear of being late or you want to unearth clues to your tardiness, get a piece of paper or journal and list any memories of you (or others) being late or feeling controlled by someone else’s schedule or feeling that you were in control of a person via your timekeeping – these are the associations driving your habits. Examine any that hold an emotional charge for you (strong positive or negative reaction) so that you can evolve beyond the past – these old habits can cause you to feel small.

Of course tardiness is annoying to be on the receiving end of and it can feel very personal but if we recognise that it’s their habit, not a missile created for and aimed at us, we can find ways to protect us from being significantly inconvenienced.

When You Feel Like People Won't "Let" You Be Yourself
How can they keep doing what they know will hurt us?
For some of us, if we don't have to hustle, we don't feel interested